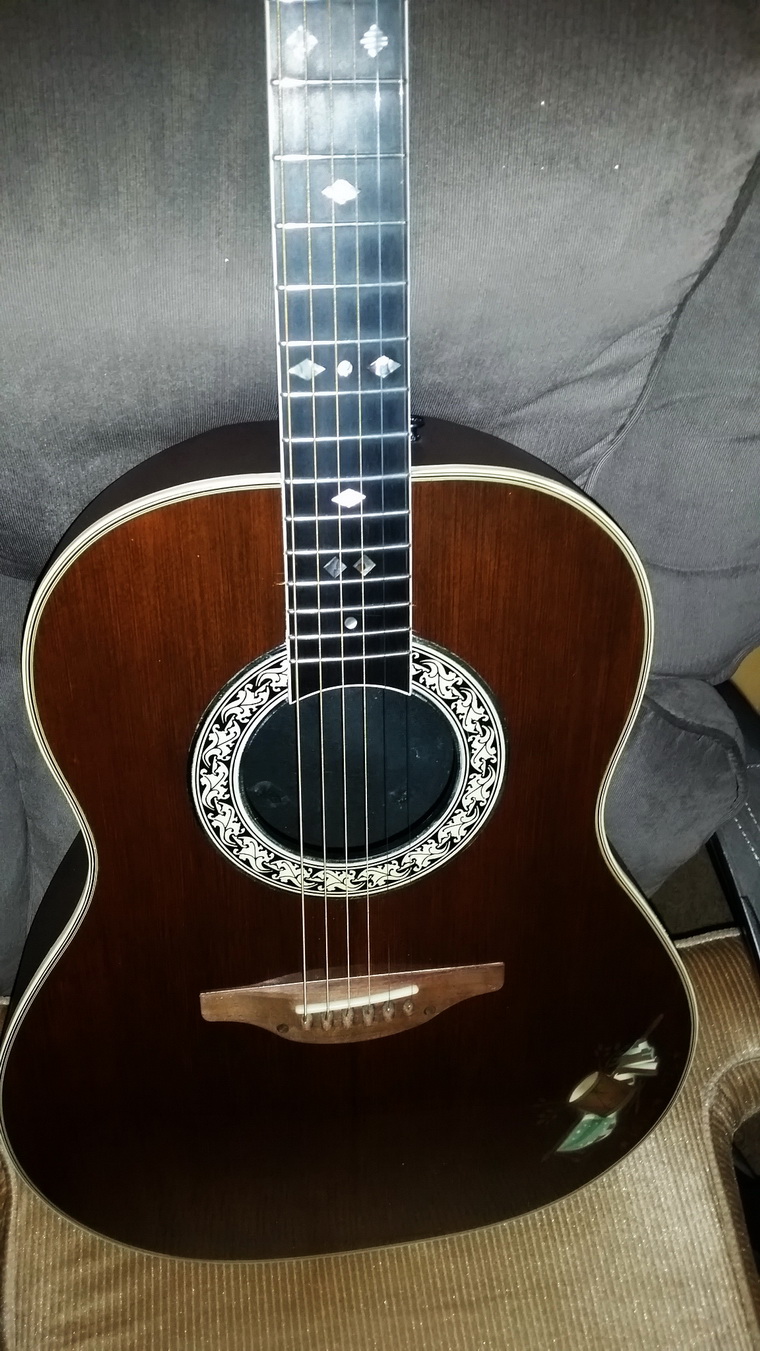 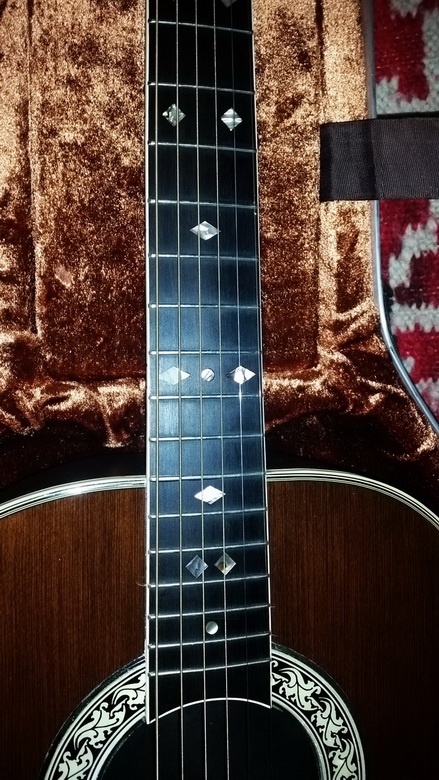 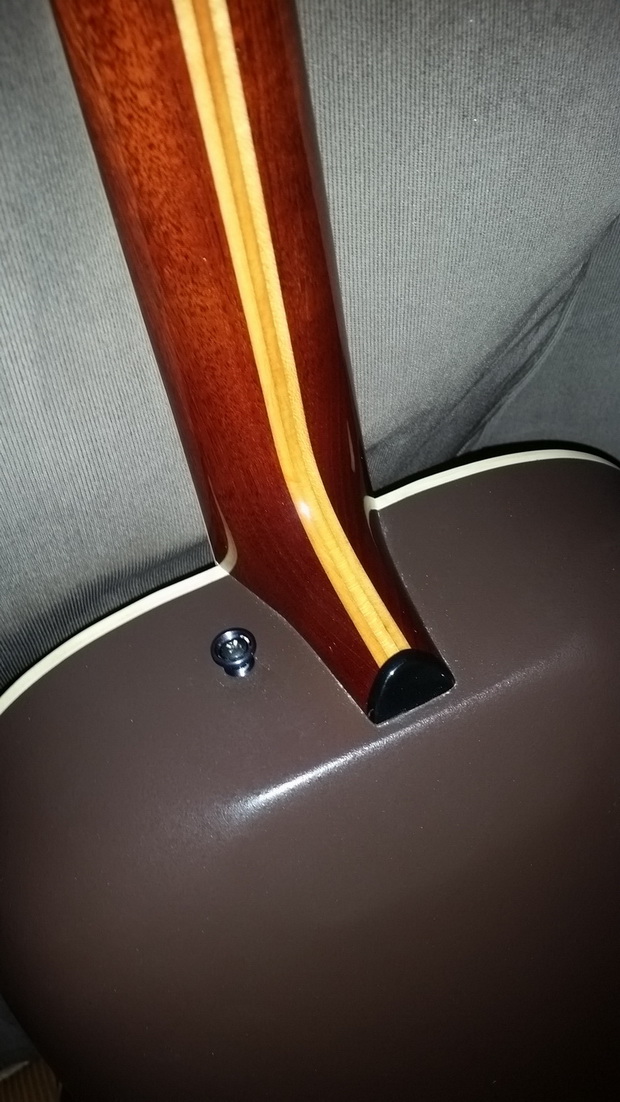 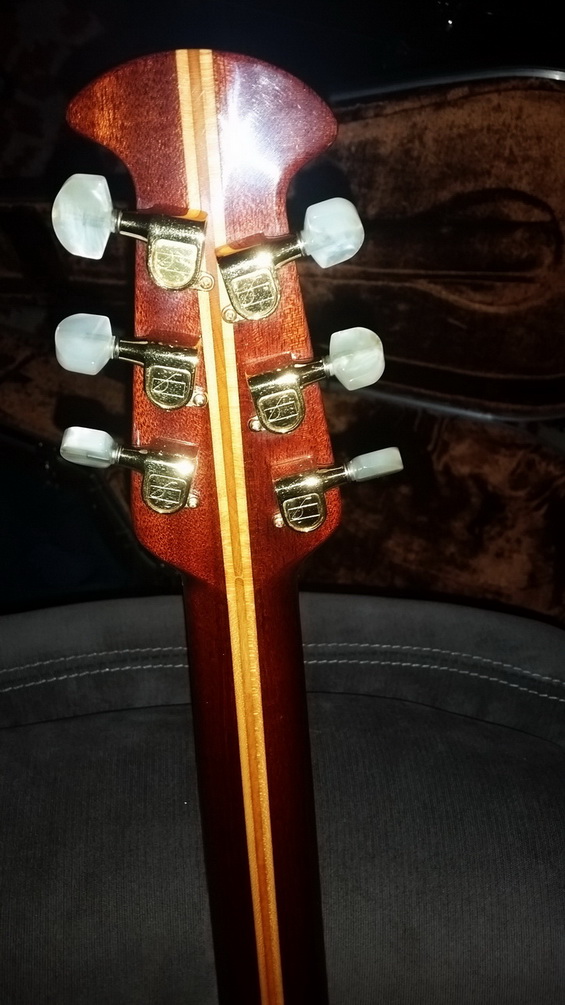 by madethescene
As promised here are the pictures...have to apologize ahead of time as they are with a camera phone that I have no skill with.
She is as close to mint as you can get. 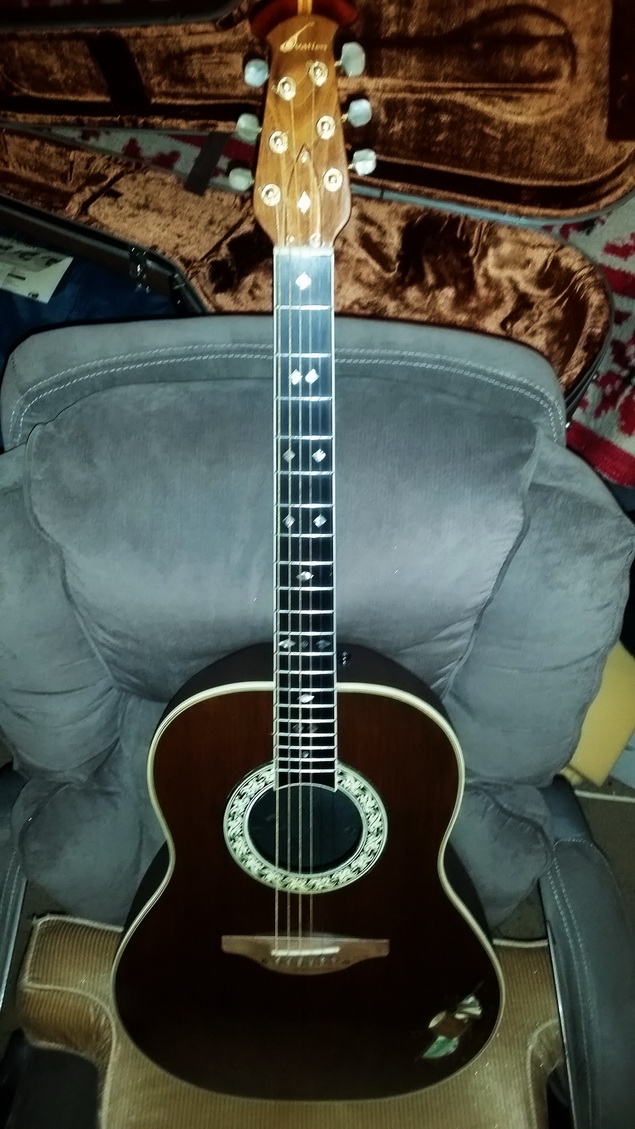 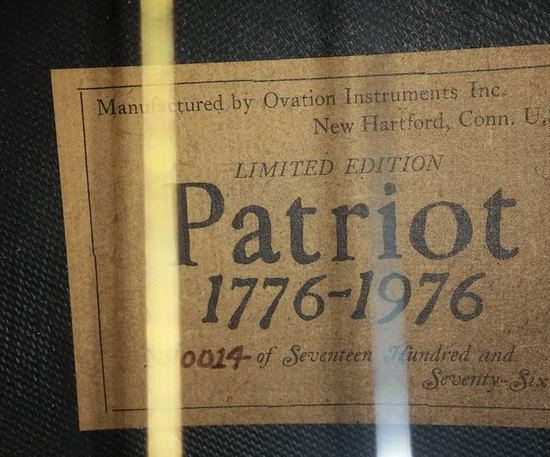 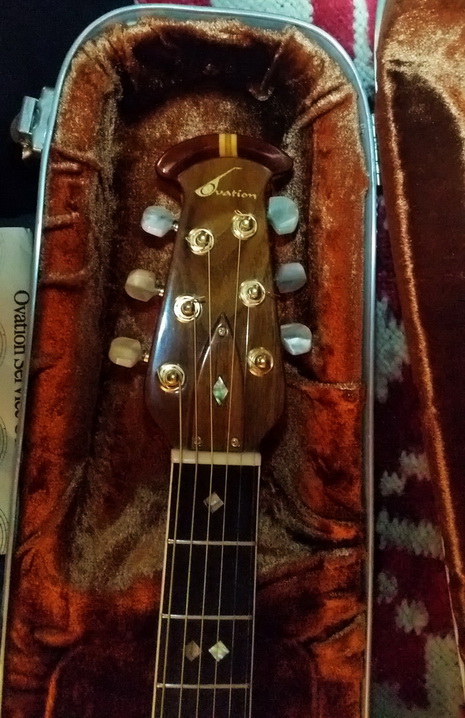 by Bluebird
Hey, great thread, looking forward to some pics of that beauty, madethesene.

By the way, Wind Beneath My Wings was one of the finest songs from that era. Sorry for your loss.

You are exactly right. The nutmeg tops were leftovers...at least that is what lore says. I may try to have that confirmed by Bill Kaman someday...and you obviously have been around Ovation lovers because they were very resourceful with leftovers. I have a 67 Balladeer that has a two piece neck, instead of the 5 piece skunk stripe neck (I have one of those also). One of the guys that used to carve the necks for Ovation told me that production did not stop if they were shy resources...they made do with what they had.

I have owned countless Ovation acoustics, including an Adamas Ute...my 1651 rivals the Ute and matches my two shiny bowl 67's in fullness and response, acoustically. I have a 1619 from the same year and I prefer the 1651 over the CL. Being that they are the same bowl, the same bracing...one would have to conclude that it is that nutmeg top...who knows...all I know is that it sits on top of my players list.

As far as the Patriots go...I would LOVE to play one to feel and hear the resonance. They rarely are available on the secondary market at a price that I can justify...if they are in good condition.

I am looking forward to seeing your pictures. Thanks for sharing. It's no secret...I love guitar talk...especially when it comes to Ovations.

by madethescene
Thank you...yes it's been a rough start for 2015.

Certainly ..will post some pic's tomorrow...can you tell me the pic size limit? I'll probably have to re-size them all. No big.

Yes I was talking about the Glen Campbell Artist...obviously the country artist has nylon strings and a different head-stock config. My bad.

I do have some information that I believe is correct about that last guitar you have pictured(which is gorgeous)...the reason the top color is the same as the patriot is that Ovation used the left-over Patriot tops...evidently they didn't like "stuff" to sit around and had extra so they used it. The tops were special....what I heard is that they were specifically tuned to the guitars frequency response...somehow I think Ovation always did that, not just on Patriots, but there was something "special" about those 1776.

by jay
First of all, I am sorry that your dad passed last December.

Thank you for sharing this tremendous story. Is there anyway you can post a picture of #14?

I am sure you are aware that Fender scuttled Ovation, ending American production last year and finally putting the nail in the coffin by throwing it into a percussion package they sold to Drum Workshop.
I am not sure which employee was able to get away with the records when they closed New Hartford. I hope it was someone that will make them available to us, at some point in time.

I am just not aware of any guitar that Ovation brought out in 77/78 other than the 1651...which was the Legend Limited. It did share a nutmeg top, from the Patriot line.
Here is a picture of mine... 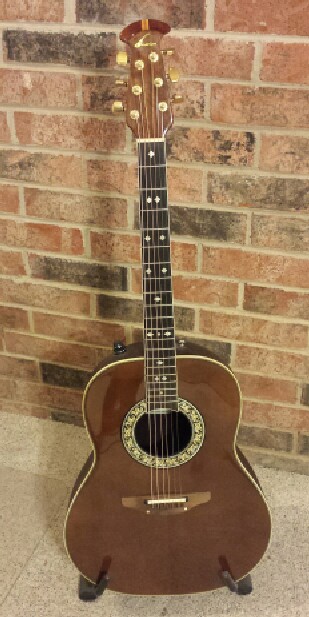 Please, if you have any stories about Glen and your dad, share them, if you feel comfortable in doing so. The story behind this Ovation 1776 Patriot guitar is fascinating. And having such a low serial # fits with Glens and Charlies relationship. Very cool!

by madethescene
I suppose after looking through some information that '77 was not the first year of the Glen Campbell Artist...for some reason I thought that was the first production year.
Well that shoots down that theory...everything else is spot on.

by madethescene
Hello Jay...thank you for responding so fast with some brilliant information. I own quite a few Ovations...but this one...is special...not only because of the model:

I am not speaking from a position of "guessing" I am also not attempting to sound smug in the slightest. I am currently really looking to get a duplicate of the paperwork that Glen lost for this guitar. I am not concerned about who owned it...because I already know. When I compared the '76 Patriot to the '77 GCA....... other than the top stain and top inlay...they are identical...since the GCA didn't exist prior to 76 and since this was his personal guitar...it looked the part to me. It sure looks like the parent guitar. I have not read the thread you linked me to yet..I look forward to it.

The reason I know it was Glen's guitar is because he personally gave it too one of his very close best friends....a fellow who wrote many hit songs for great artists.. including the most popular song to date...
"Wind Beneath my Wings"....Of course for those that do not know...his name is Larry Henley. He won a Grammy in 1989 SOY.. he is also my father. Unfortunately he passed away on Dec 18th '14. He had something very similar to what Glen has...and lost his battle too early.,,he was only 77. They were the best of friends right up until his death...those that know...know this is correct...it's no secret...especially to Glen.

As far as the guitar is concerned, I can personally verify this is the guitar Glen gave to Larry.,,then to me. I want written proof...Ovation supposidely has a master file of al original owners...it was even in thier ad for the Patriot.
Now you know he did own one...this one... #14. My Dad told me on one of the many occasions he visited Glen... that Glen asked him if he was ever going to learn to play guitar...my Dad was not a player and he said "probably not"...Glen argued that it would be easier to write songs if he would play( he always needed a guitar or piano player) Glen got up and went into a room and came back with #14....here is something special for you... in case you ever do. He never did.

I will be visiting Nashville soon and expect Glen to be at BMI during my fathers remembrance...I will share the outcome, if he is well enough to attend., with you all here and pictures (because it will be appreciated) otherwise of course, that would be private.

by jay
Hi madethescene!
Welcome to the forums!!!
Hopefully I can answer your question.
I think you are getting a couple of O's mixed up. 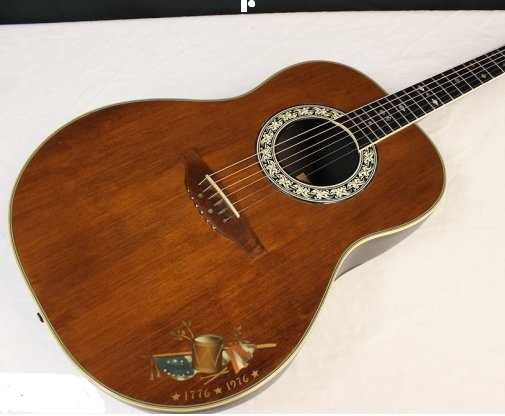 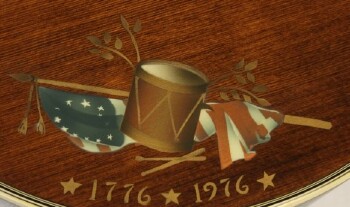 Glen, to my knowledge never had one.

I believe you are thinking about the prototype X014. It was developed around 1970. You are correct in that it belonged to Glen AND on the money as the proto for the 1624/1124 Country Artist...a guitar R&D'ed for Glen and basically put Ovation on top of the world...because from that point, they went on to have a KILLER "plug in" line of acoustic guitars that had everyone playing Ovations, that was anyone in the pop, rock, country genre in the 70's and 80's.

With a lot of help from my friends, I wrote about the X014 extensively RIGHT HERE. I think once you read that topic, everything will fall in place for you. AND there are some pictures that I think you will appreciate.

If you have any questions, please do not hesitate to ask. You obviously are more knowledgeable than most on Ovations. Great question...thanks for posting it.
All times are UTC-06:00
Page 2 of 3
Powered by phpBB® Forum Software © phpBB Limited
https://www.phpbb.com/