On another note: this CD apparantly has Glen mentioned in the credits as guitarist: http://www.allmusic.com/album/these-are ... 0002629095" onclick="window.open(this.href);return false;

Just so you know--there are MANY of these 45's available on E-BAY....Right around 2-5.00 tops--the postage sometimes is MORE than the actual 45 rpm! There are also some of these that were released in the UK!

Looks like the matching VINYL to the CD!! Interesting--thank you Cowpoke....Always glad to assist. I will have to search for that 45-I own NONE!

Thanks Arlw! Appreciate it very much. We're lucky to have you on this forum!

I am closing in on another set of Andy Williams' tracks that Glen presumably played on. Interestingly enough, they are also present on "25 All-Time Greatest Hits 1956-1961: The Cadence Years".

The tracks were originally released on 1 single:

Both tracks were recorded in one session on October 17, 1960 (see https://en.wikipedia.org/wiki/Andy_Williams%27_Best" onclick="window.open(this.href);return false;). This fits in perfectly with Glen's timeline. Glen came to LA in mid-July 1960. However he starved for a few months until he got the gig with The Champs in late October 1960. Now Glen's career as a studio musician didn't really get started until 1961 when he started making demos for American Music (and being recognized as a talented musician by producers who listened to his demos). So if Glen is on this Andy Williams 45rpm it must have been (one of) his first session(s) after moving to LA.

What proof do I have? I have an audience taping of a concert by Andy and Glen in the Grand Palace in Branson. On stage they share the story of how they first met: the recording session for "In The Summertime"! Andy also mentions that it was one of Glen's first jobs as a studio musician. After that they perform the song together. The sound quality is not good, but still, for historical purposes I will try to upload this part of the audience recording to the Resources forum here on Glen Campbell Forums.

Here you go cowpoke--GREAT CD!!! This is the ONLY one I have with Glen Campbell and Andy Williams-many people thought he was on "Moon River", but that is not true! If you locate this CD on Amazon or EBay-I would buy it!!

ANDY WILLIAMS – 25 ALL – TIME GREATEST HITS 1956-1961: THE CADENCE YEARS. The release date of this CD is April 9, 2002. The label is VARESE RECORDS/VARESE SARABANDE. # 302-066-303-2. The label on the CD itself is, “CADENCE RECORDS”, NEW YORK. There are 25 tracks on this CD. This compilation is from 2002 on Barnaby Records, Inc. “Courtesy of Barnaby Records, Inc. by arrangement with Celebrity Licensing, Inc.” 2002 Varese Sarabande Records, Inc. Liner notes are included in this CD. It is mint condition, as it is a brand new CD. Glen Campbell plays studio session guitar work on this CD. He plays on “I Like Your Kind Of Love”, and “Summer Love.” Distributed by Universal Music and Video Distribution, located in California. This is printed and made in the United States. This compilation of Andy Williams is the most comprehensive single disc collection of his Cadence Years from one of the most popular vocalists of all time.

A request for Arlw. If you have time of course, would you please tell me again what your files say about Glen's session work for Andy Williams? Many thanks in advance!

Very cool, Cowpoke!
Thanks for your definitive research! 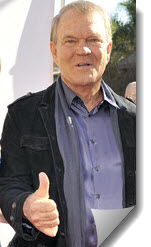 According to Rhino Records, "an opening lick courtesy of Glen freaking Campbell" is on Mike Nesmith's "Mary, Mary" (both the single and the track on The Monkees album, More of the Monkees).

What do you think?