Really appreciated reading your last post under this topic, Ar!

A Merle Haggard song, "Mixed Up Mess of a Heart", with a mention of Glen Campbell showed up in a news feed yesterday:

"Mixed Up Mess of a Heart" — Merle Haggard (Capitol Records, 1966) / Written by Merle Haggard and Tommy Collins
Haggard wrote this song with fellow Bakersfield songwriting legend Tommy Collins and recorded it at Capitol Studios in Hollywood. The Don Rich-style high harmonies were sung by a pre-fame Glen Campbell*.

There are no credits for the musicians/other vocalist(s) on the original vinyl record sleeve.
I found a YouTube link with this song, but I can't tell if it's Glen Campbell singing on it. What do you think?
It sure sounds like Glen Campbell's guitar magic!

This 45 is a Rockabilly record by BOBBY DENTON and the studio session people that recorded with BOBBY DENTON on this record were Eddie Cochran and Glen Campbell. This is an original US PRESSING from 1961-1962 on the CHANCELLOR Orange Colored Label. CW-102. The 2 tracks are: “I Guess I’m Still In Love With You/The Wrong Side Of The Door” – Both tracks are A JIMMY BOWEN PRODUCTION. This is distributed by ABC-PARAMOUNT RECORDS/American Music Inc. Bobby Denton AKA BOB DENTON-Featuring Glen Campbell on Guitar! Produced by Jimmy Bowen. The record is about 43 years old and is in very good condition. According to the “LATCH ON” magazine, Glen Campbell does VOCALS, GUITAR SOLOS, AND CHORUS HARMONY on this recording with Bobby Denton. This 45 is considered extremely rare. Glen Campbell was only 25 years old when he recorded this studio session work with Bobby Denton and Eddie Cochran. Glen did quite a few recordings with Bobby Denton in his studio guitar days, but this one he is actually singing with Bobby Denton and doing what he does best-“playing his guitar.”! This is a great 45!!

Rockabilly 45 by Tony Epper / Glen Campbell on the Gallahad Label. This is an original early 60’s pressing on Gallahad Records. # 101. (M80W-0674/M80W-0675). The tracks are Shame On You / Cold Gray Bars. Recorded by Tony Epper and arranged by Jimmy Bryant. Both sides were written by Spade Cooley. There is reason to believe that Glen Campbell also did some studio session work for this small California Label. The record is in Mint-Minus Condition. Gray label with black lettering. This is an extremely rare 45 with Glen Campbell on here. This recording by Tony Epper is a great item to have in Glen’s studio session work!

Lou Rawls – Capitol Records-purple label-American Music, Inc. BMI-Produced by Nick Venet. # 4669. Lou Rawls does “Nine Pound Hammer/Above My Head.” Glen Campbell is the Session Leader on the track “Nine Pound Hammer.” This track was written by Merle Travis. The 45 is in very good condition-shows some surface scratches but does not affect the play. (45-36227/45-36658). This would be listed in Studio Session Days for Glen Campbell. Nice 45. No date is listed on the record but in doing research this recording came out on Capitol Records with Glen Campbell on guitar back in 1961. This record is 49 years old so when Glen recorded this track with Lou Rawls, he was a mere 25 at the time. Great studio session leader track for Glen.

In September 1966, Glen Campbell did a session resulting in a 45 called "Tiny Bubbles" (flipside: "Hawaii") on Decca 32041, by Ed Kenney. This is the original Decca 45. The record is near mint condition considering its age! Under the credits of Ed Kenney on this 45 of Vocal/Orchestra and Directed by, they list GLENN CAMPBELL with the 2 N’s and he is also listed that way on the flip side. I think this is not only a misprint but a rare find. Glen is on this 1966 recording. Decca Records-Granite Music Corporation. This 1966 release record is housed in the original Decca Sleeve. What makes this even more interesting is that in November of 1966, Glen Campbell not only has these 2 tracks added to his credit, but recorded with Ed Kenney another 4 songs which ended up on an LP called “Ed Kenney’s Hawaii”-also on Decca. That LP was also bought and will be added to the albums when it arrives. The track on this 45 “Hawaii” is from The United Artists Motion Picture, “Hawaii”. Great 45. This record is 47 years old--at the time I bought it...

Just some interesting records on Glen!

Dee,
I think that might have been the last year session wise--circa 1968...check this out from my collection:

Jack Jones – This is an original 45 released on the KAPP RECORDS. #K-651. The Race Is On/I Can’t Believe I’m Losing You – both songs are by Jack Jones, but Glen Campbell does studio guitar work on “The Race Is On.” Has some surface scratches on both sides, but still plays ok. It comes in a generic white sleeve. Produced by Michael Kapp. Orchestra Arrangement and Conducted by Don Costa. K-8738/K-8727.Manufactured by KAPP RECORDS INC. ,New York. This is an extremely rare 45 and was done in the early 60’s. There is no date given on this record. This is the time when Glen Campbell was doing studio sessions for hundreds of artists!

Great promo, arlw, and thanks for the correct year for Inman's album!
I probably obtained that year from allmusic or a similar site (not always accurate); the year is not printed on the sleeve or record.
1968...this album may have been one of Glen Campbell's last studio albums, what do you think?
Jerry Inman's "From Me To You" works for me!

Dee,
On that Jerry Inman LP, the date is 1968. I too thought it was 1967, but got a good source to correct me so passing it onto you and others! Also, Jerry does sing some of the tracks on there-- listen to this:

Sorry about the you-tube being here, but just found this....

Nice LP Dee--I have that one and this---just a write up but different than the original--this is a PROMO.

JERRY INMAN – LENNON-McCARTNEY COUNTRY STYLE R.F.D. – Columbia Records on the red label CS-9593/CL-2793. On the label they have it written as “Lennon – McCartney-R.F.D.-The Beatles Country Style – Jerry Inman!” Different from the jacket title. XSM-135232. Columbia Records Radio Station Service. This Record Is Not For Sale. This is a promotional copy. Produced by Jerry Fuller. Arranged by Glen Campbell and Jerry Fuller. Glen Campbell plays the guitar on here and James Burton plays the Dobro. The selections on this are instrumental, are BMI. Manufactured by Columbia Records/CBS Inc. The album is near mint condition, and the jacket is in great shape. No date is given, but 1967 would be the date I would choose for this LP.

Guess I was right on the date!!

How about country-spun Beatles music with studio musician Glen Campbell?

I just discovered an interesting connection between Glen Campbell and The Fab Four! Yes, The Beatles!
In 1967, Jerry Inman cut a record, "Lennon-McCartney Country Style R.F.D.", with 11 Beatles songs on it. This album was produced by Jerry Fuller, and the music was arranged by both Glen Campbell and Jerry Fuller! Glen also plays guitar as a studio musician on the Inman album.

Part of the album's back sleeve with liner notes / credits is shown below.

At least a few of Inman's tracks from the record are posted on YouTube. Below, you can listen to one of these tracks, "Help!", and you can clearly hear Glen's guitar playing. (The other guitar is a Dobro played by James Burton, another smashing session musician.) 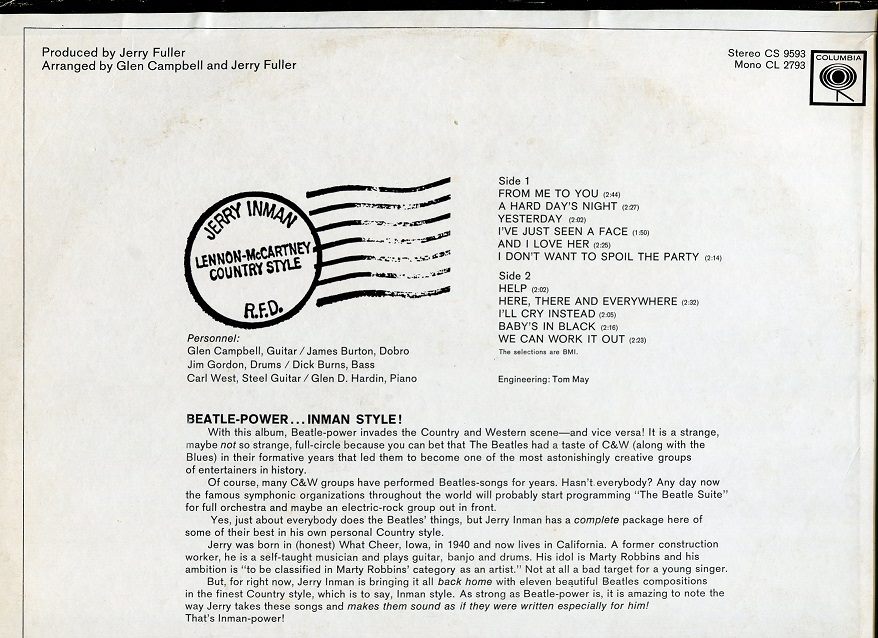 Thanks, Randy! Carol Kaye has a great website; love her library of Q's & A's with insider information on what it was like to work on those studio sessions with other musicians.
I remember Carol saying in an interview that it was the job of the session players to make every song a hit whether or not they liked the music.
Therefore, team work and a good sense of humor must have been required despite probably feeling like they were in a pressure cooker.
Did she ever publish the book mentioned on her website? It would be a good read.
I remember that Wichita Lineman interview with her, too, but I can't find it on YT...not yet. It might be on The Wrecking Crew's website....will keep looking.
Thanks again!
Dee

Cowpoke,
As far as I can tell doing research and etc.,.this is the only release I can find on Sandy Campbell. What's interesting is the label I HAVE on that silver disc!!! As the release below is 1973, but on MY label it has 1976! Also, the BIG GIRL NOW is b/w It's OVER FOR NOW---and I couldn't find that track anywhere. My guess is the one below is correct-I might have a RARE Label on that disc but I display it as BIG GIRL NOW.


Regarding the studio session work, whatever you come across that says Glen is on it, go with the flow and listen to some of the tracks as they will always point you in the direction of Glen Campbell/not! Most of them, when I play them, I can tell right away if it's Glen/not. On some of those Champs recordings????

Yes great Carol Kaye quote Cowpoke. I know how much Dee thinks so highly of the wrecking crew as do I. And of course you too , Cowpoke. What a great atmoshpere to have as I was fortunate enough to have in my career too where you not only work together and are serious about your job, but you also become great friends and have "fun" working together. Truly a blessing!!!