Great article by a professional guitar player who was inspired by Glen Campbell. Talks about Glen's "restraint" in his playing.

That's right Randy. Douwe Bob is one of the new stars over here and he is wearing his Glen Campbell loving heart on his sleeve!

Correct me if I'm wrong , but this beautiful tribute comes from the land of Cowpoke. Really poignant.

At the Country Music Hall of Fame and Museum, a tribute to Glen Campbell has been set up in front of his plaque displayed in the Museum’s rotunda.
A guestbook can be signed by fans who wish to pay their respects to Glen.
The framed signage reads:

In Memory of Glen Campbell

You are invited to share your memories and
condolences in the guest book, which will be
delivered to Mr. Campbell's family.

You will notice his date of death has not yet been added to the plaque. 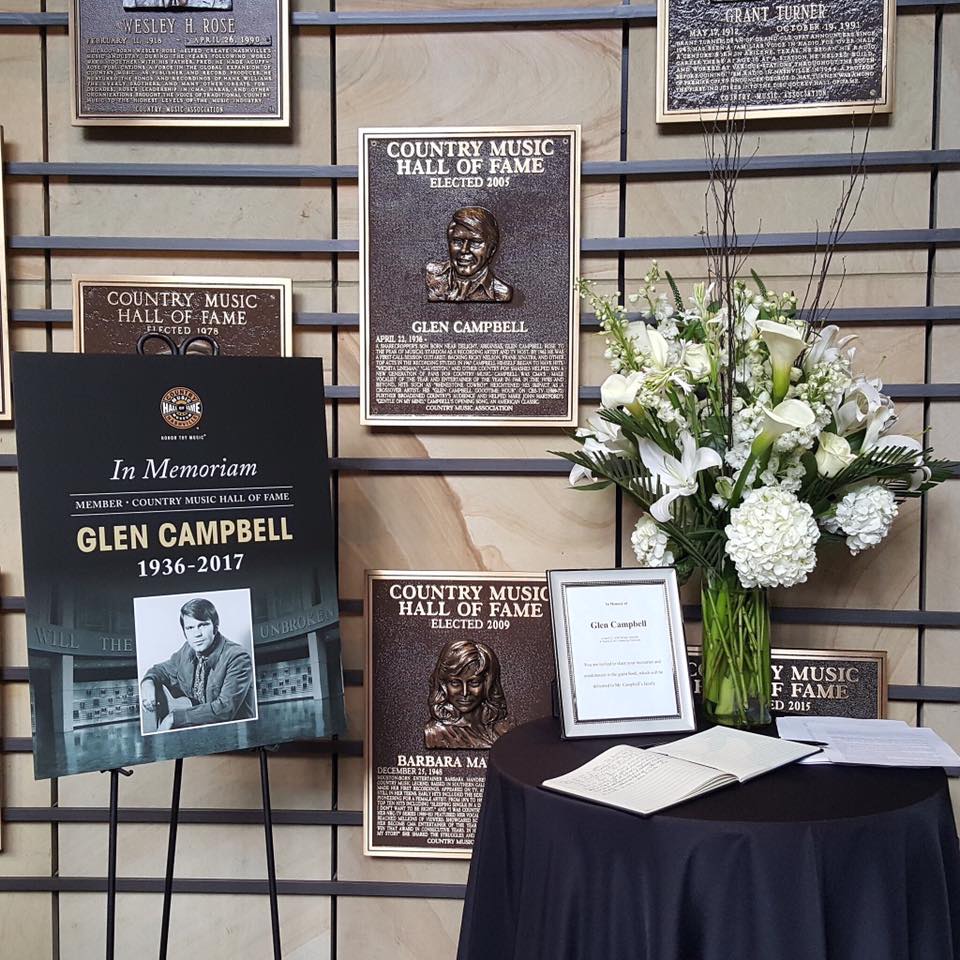 Great video tributes. Thank you, Randy. Here is a news story from Arkansas: 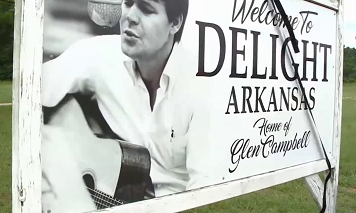 Wow, great post by Joe Henry Randy. Thanks for sharing.
Surfdog made a tribute video... here it is:

Great post from Mr. Joe Henry. Been scouring around you tube and seeing alot of people picking up their guitars and singing their tributes and paying their respects to Glen. Whether it be stars or not makes no difference as the sincerity of their paying respect to Glen is moving. Here are a couple that caught my attention.

And read in the description on this one on this young man's thoughts. Very moving.

As saxophonist Charlie Rouse was the ideal articulator of Monk’s angular fantasias –Marcello Mastroianni the pitch-perfect spokes-model for Fellini’s traumatized bon vivant– so songwriter Jimmy Web found in Glen Campbell the perfect delivery system for his pop-country operettas of the late-1960s: Glen, who was –at least in his crafted stage persona– the quietly stoic arbiter of our nation’s deep disparities. As war raged in Southeast Asia, and our leaders (elected and otherwise) toppled to extravagant violence here at home, Glen stood as if at the bow of a ship warning the psychic iceberg we’d already struck, reversed, then struck again.

After hounding my dear mother for days, I can still recall being driven in her ’56 Belair to the K-Mart on a scorching summer afternoon in the Atlanta of 1969, and laying down 95¢ of my allowance for a 45-rpm vinyl platter of “Galveston.” It was my first investment on behalf of my budding and reckless ambitions –and it was no misstep to have made it; for, in less than 3 minutes, a short film unspooled behind my eyes of a melancholy foxhole soldier in Vietnam, dreaming of the beaches in South Texas upon which waited the love that might one day receive his return –and who might, in fact, hold within her secret heart his very redemption by proxy, should he never.

The song floored me then as it does today, and it changed the way I heard everything that followed; priming me for the character studies of Randy Newman and Tom Waits that would soon raise the stakes for any of us in pursuit of such alchemy.

Webb’s writing itself, of course, was near peerless, as few could so deftly render a moment of perilous discernment as vividly as did Jim. But it was Glen’s keening voice, ultimately –his urgent protestations against every thief of love’s promise– that made manifest in song the very things that both lay us flat and give our collapse such buoyant, aspirational purpose.

And now Glen is gone [not gone]. But as clear as my earliest memory of him remains, none shall eclipse the evening in which, for the first and only time, I stood in his company….

In January of 2012, I was on the bill of the Ann Arbor Folk Festival –held that year at the majestic Hill Auditorium: the very room in which, during my college days, I’d seen Bob Dylan, Ray Charles, Sarah Vaughn, and Miles Davis all draw my heart’s true design in real-time before me as viscerally as Picasso had once briskly painted upon a great pane of glass for a film short.

It was no small thing for me to be invited onto that stage as it had meant so much during my formative years; but in addition, Glen Campbell was that evening’s closer.

I knew he was not in good shape, and, initially, I resisted the impulse to listen; thus, after playing my set, I bolted to the hotel bar across the street with brothers Jay Bellerose and David Piltch, content to *talk* about the man’s deep history rather than witness its decline.

But then, with Jay as coaxer and ballast, I challenged myself back into the theatre wings to at least watch the great man appear; just so I could say I had.

To my shock and disquiet, Glen materialized within a few feet of where I stood in darkness at stage right, and –in an effort to ground himself for the laborious hour ahead– he quietly strummed through a familiar chord sequence on his Stratocaster as his family band went out ahead to play an instrumental medley in preamble. And I averted my gaze.

Suddenly, he was in motion and onstage, as if a string had forced his body into surprised animation, and I stood trembling as if anticipating a physical blow. My friend Emmylou Harris, who’d bridged Glen’s performance and my own, appeared at my side, having come off her bus to bear witness as well to whatever might come to pass.

Leaning into old songs that his fraying mind would still not refute, Glen launched into “Galveston.” And as he bore down upon this as bedrock –as I choked upon all this had meant, could mean, or might ever here forward– Emmy curled her arm through mine and sang along at a whisper into my waiting ear, “Galveston, oh Galveston– I am so afraid of dying…”

And for at least that one fleeting suspended moment, I wasn’t any longer.
JH