LOL I tried to be graceful about it, but heck yeah... it got the impression the Academy actually aimed to honor Memphis Minnie by giving Alabama Shakes the award.

Sadly, they missed it...by a mile.
Copying roots, is not the same as having created them.

Congratulations to Alabama Shakes for winning the Grammy for Best American Roots Performance!

Tonight's the big night. Glen's track "Arkansas Farmboy" from his 2017 album Adios has been nominated for a Grammy in the category "Best American roots performance". Will Glen win a final posthumous Grammy? Fingers crossed for Glen's family and producer/friend Carl Jackson who produced AND wrote this beautiful track. 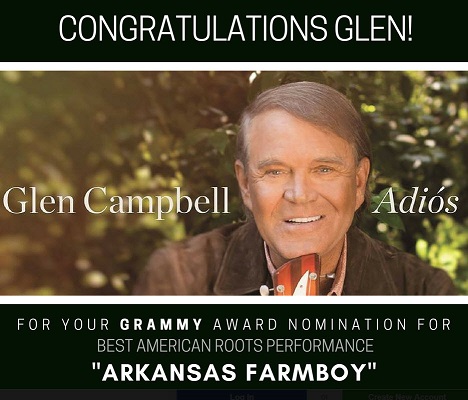 Glen Campbell Forums extends our warmest congratulations to Glen's family and friends, with special recognition to CARL JACKSON for writing "Arkansas Farmboy" and also producing Glen's recording of it for his award-winning album, ADIOS!

CATEGORY: Nominees for Best American Roots Performance
(For new vocal or instrumental American Roots recordings. This is for performances in the style of any of the subgenres encompassed in the American Roots Music field including Americana, bluegrass, blues, folk or regional roots. Award to the artist(s).)

• I Never Cared For You
Alison Krauss

GLEN CAMPBELL'S "SOUTHERN NIGHTS" IS ONE OF THE SONGS ON A NOMINATED COMPILATION SOUNDTRACK IN THE CATEGORY OF:

Best Compilation Soundtrack For Visual Media
(Award to the artist(s) and/or ‘in studio’ producer(s) of a majority of the tracks on the album. In the absence of both, award to the one or two individuals proactively responsible for the concept and musical direction of the album and for the selection of artists, songs and producers, as applicable. Award also goes to appropriately credited music supervisor(s).)

Being from Luziana I love the Arkansas Farmboy!
thanks so much for this!
https://www.pinterest.com/alwaysandfo00 ... l-forever/" onclick="window.open(this.href);return false;

Nominations will be announced on November 28, 2017. Check out Grammy's official site for breaking news about significant changes to the voting process and amendments:
https://www.grammy.com/grammys/news/201 ... ced-nov-28" onclick="window.open(this.href);return false;