I remember this CD--bought it when it came out: from my collection:

A Postcard From California – Al Jardine. Manufactured by Amazon.com. (8-43485-07172-7). The CD was released on June 29, 2010. The Label is “Jardine Tours.” Beach Boys co-founder Al Jardine, who started the group in 1961 with the Wilson brothers (Brian, Carl, and Dennis) and their cousin Mike Love, released his new solo album, A Postcard from California. The twelve-song collection includes four cuts that comprise what Jardine calls "the green side" of the new album, compositions that speak to the relationship of man and his environment. "Don't Fight the Sea," "Tidepool Interlude" and "A California Saga" are songs that reflect this artist's deep love for the California coastline and his concern for the ecological health of the planet. "I think this material defines the new project in these days of climate change," he suggests. Al Jardine has always embodied that concern for the environment, and the coastline and ocean in particular. Previously, on the Beach Boys' "Surf's Up" album, he and Mike Love had written the song, "Don't Go Near the Water." The new album includes "Lookin' Down the Coast," a tale of the discovery of California by the Spanish, as seen through the eyes of its natural inhabitants, the California condor, the whale, the otter and the bear. The collection, "A Postcard from California," was largely penned by Al Jardine and features a regular "who's who" of classic rock and popular music royalty. Jardine was joined in the studio by a steady and willing stream of famous friends, including Brian Wilson, Glen Campbell, Gerry Beckley and Dewey Bunnell of America, Flea from the Red Hot Chili Peppers, David Marks, Richie Cannata and John Stamos, in addition to those already noted elsewhere in this announcement. Completing the generational span, Jardine's sons, Matt and Adam, are also heard on vocal harmonies. Glen is heard vocally on the first track and also he plays the guitar on here too. Glen also closes the track “A Postcard From California.” Nice booklet included and Glen is in there with Al Jardine. When this CD was recorded, Glen was 74 years old—he is the oldest one in the pack! The title track that Glen sings was a sampled track on Al Jardine’s website and when this CD was released, they used that sample track and blended it into Al’s version so both get a solo part in the title song.

Hi Dee,
thanks for all the information! It's all very interesting. But no I didn't have tickets for Al's tour. I also am not completely sure if this demo is the same track that I heard. The track that I heard was easily available on Al's website at the time. Could that have been another demo?
Cowpoke

In appreciation to fans over on the Smiley Smile board for the demo info they posted, here is a photo, "a postcard from the East Coast", if you will, that I had shot of Al Jardine at a Pet Sounds concert last September 2017. Keep on smiling. 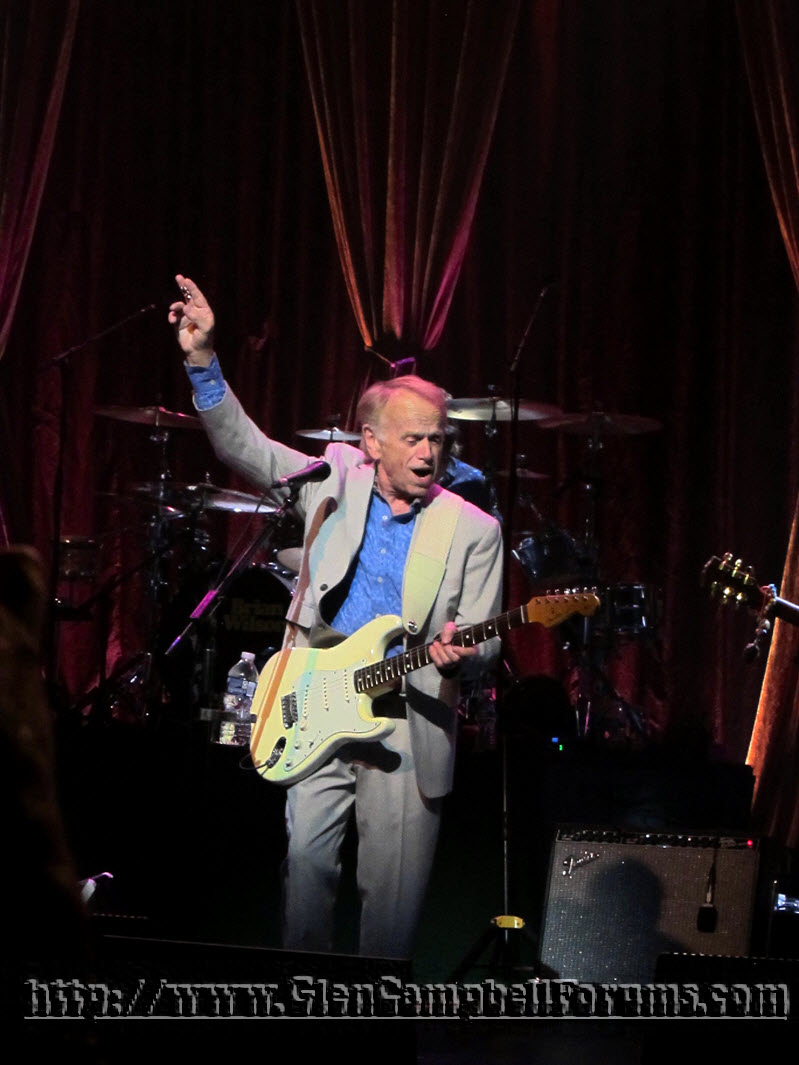 A very funny comment was posted on the SS board about "Postcard", the song, sounding a bit like RC. I thought you'd like to read it! "...(the album) kicks off with a Rhinestone Cowboy re-write. When I first heard it I thought "Cheeky f**ker, Al!" Then I realised the other guy singing on it was The Rhinestone Cowboy himself!"

Beach Boys fans on the Smiley Smile Board had posted about the demo under at least a couple of threads. Not easy to find due to the tremendous number of posts on this board.

Apparently, the demo was actually an unreleased EP with 4 tracks that were "privately" posted on Al Jardine's website. These demos were intended for BB fans who had attended concerts during the BB's 2007 European Brian Wilson/Al Jardine Tour. Al had canceled from the tour at the last minute, then offered fans with proof-of-purchase ticket stubs a free copy of his upcoming CD.

The CD release was delayed. An Al-authorized email was sent to fans with apologies for his absence on the tour and for the CD's delay. He offered 4 downloadable tracks from the album via his website. As you know, the D/L links were available for only a short time. It sounds like there may have been piracy concerns (no surprise). From the board posts I had read, it wasn't clear to me when the links were initially up on the website. However, before the end of 2010 February, the links were removed.

Were you a ticket holder for one of the European concerts in 2007? Or did you just happen to visit Al's site at the time the D/Ls were available?

You read about that demo? Wow, I haven't been able to find anything about it. I looked through the web archives but to nonavail. Where did you read about it if I may ask?

Cowpoke wrote: ↑
Sun May 27, 2018 2:27 pm
I still cannot get over how stupid I have been. Al Jardine had a demo version of Postcard from California on his website. It sounded even more as Rhinestone Cowboy than the version that was released. Now why didn't I make a copy of it!!
Thanks for all your interesting posts Dee!

Very sorry you were not on your game, Cowpoke.
I had read that the demo of Postcard from California (track one) is excellent--just Al Jardine with acoustic guitar.
Thanks for posting.

I still cannot get over how stupid I have been. Al Jardine had a demo version of Postcard from California on his website. It sounded even more as Rhinestone Cowboy than the version that was released. Now why didn't I make a copy of it!!
Thanks for all your interesting posts Dee!

Here you can listen to Al Jardine and Glen Campbell dueting on "A Postcard from California" via the video embedded below. (The full album with bonus tracks is on Spotify at: https://open.spotify.com/album/26V8NKvDDdi9pcfszwNfvv.)

Andrew Hickey describes this song on his music blog as one that may reflect inspiration or influence from Larry Weiss'-penned song, "Rhinestone Cowboy". (See what you think.) The blogger also sees parallels with at least a couple of other Glen Campbell hit songs:


The song actually seems to reference several other of Campbell’s hits, being structured as a goodbye letter to a partner (like the note in “By the Time I Get to Phoenix”) and having a brief Morse code beep (like the telegraph wires in “Wichita Lineman”). And the song seems to be set in the same late-60s time period as those songs – the protagonist receives a letter typed on an Underwood, and tries to call his partner but has to leave a note as she’s out.

Hickey's review of Al and Glen's duet on track one of the album is very positive:

"...the track is an extremely good opener, with both singers in fine voice – Campbell’s vocal is clearly showing his age, but he was still one of the finest vocalists of his generation, and turns in an exemplary performance, while Jardine still sounds exactly as he did in his early twenties. It’s a derivative track, but a solid performance...." (SOURCE: The Beach Boys on CD: A Postcard From California by Andrew Hickey, dtd February 7, 2017, Sci-Ence! Justice Leak! / Head of State at https://andrewhickey.info/)

The show is a multi-media one, similar to Jimmy Webb's The Glen Campbell Years, and features songs and stories from the early days of The Beach Boys through the release of Al's first solo album titled "A Postcard from California".

Of course, his early days included Glen Campbell, and part of Al's concert includes a bigger-than-life tribute to Glen. You can watch his videotaped tribute in the official Al Jardine clip embedded above!

The video below is comprised of film footage shot during the studio sessions for the album. You'll see Glen in a cameo appearance along with some of the other artists on the album: Brian Wilson, Steve Miller, David Crosby, Paul McCartney, and more. 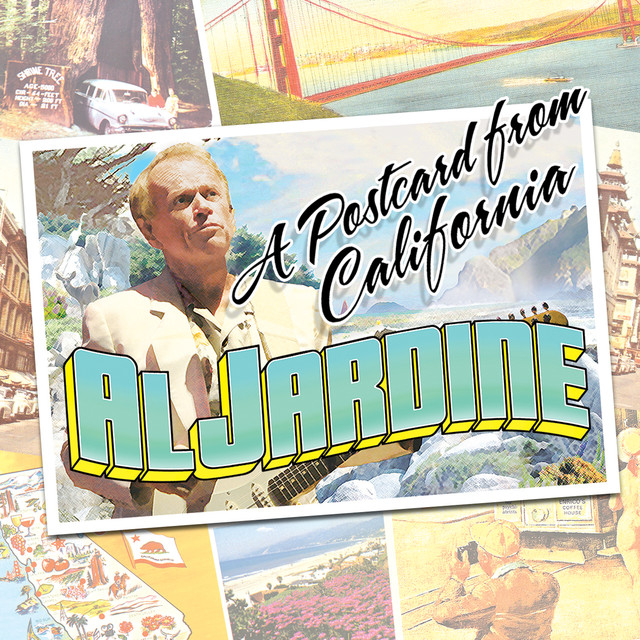