I learn something every time.I thought it was linked to the museum. And, I had no idea Epiphone was still a current brand!

You do. Probably a Guitar Center showcase. I imagine Glen's Epiphone was pre-Gibson. If he bought it new...it would have been right around the time Gibson took Epiphone under its wing.

A billboard for Glen's museum at Nashville Airport...

Question: what about those guitars in the background. Do I read Epiphone there?

And here a few of those "artist impressions" of how the Glen Campbell Museum is going to be on the inside...

Thanks Jay for all this additional information. Here's the interview Kim Campbell gave to People Magazine.

A little bit about the location of Glen's Museum

Second Avenue – or Market Street, as it was known until 1903 – contains the best concentration of Victorian commercial facades in Nashville. Most of the two- to five-story buildings date from 1870 to 1890 and served as warehouses and storefronts for goods shipped along the Cumberland River. The trend toward reuse and renovation of historic buildings has continued here since the 1970s, where shops, restaurants, galleries, and residences have appeared in formerly empty or underused buildings. Especially noteworthy is the Silver Dollar Saloon, now part of the Hard Rock Café, on the corner of Second Avenue and Broadway, which served as an entertainment venue for riverboat workers docked at the wharf at the foot of Broadway.

To the best of my knowledge, this is where Glen's Museum will be located: 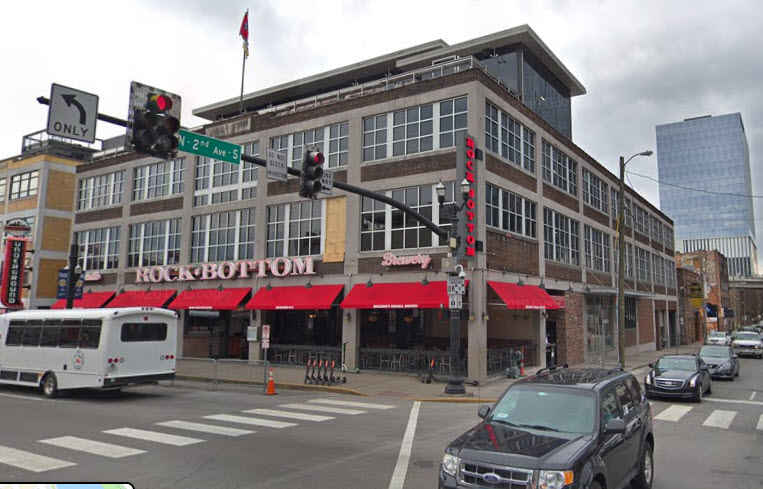 An early 2020 opening is slated for The Glen Campbell Museum and Rhinestone Stage, to be located in downtown’s The District at the intersection of Broadway and Second Avenue.

Nashville-based Clearbrook Hospitality LLC, a subsidiary of Clearbrook Holdings Corp, will own and operate the museum, it announced Thursday in a release. The address was not disclosed in the release.

Campbell, a singer and actor whom many considered a guitar-playing legend, died of complications due to Alzheimer's in August 2017 in Nashville. He was 81.

The museum will offer displays showcasing stages of Campbell’s life and career as a studio musician in The Wrecking Crew (Elvis Presley, Frank Sinatra, Dean Martin, The Beach Boys, etc.), the singer of hit records (“Gentle On My Mind,” “By The Time I Get To Phoenix,” “Wichita Lineman,” “Galveston,” “Rhinestone Cowboy” and “Southern Nights”) and as television and film actor (The Glen Campbell Goodtime Hour, True Grit, I’ll Be Me).

The Glen Campbell Museum will span more than 4,000 square feet and offer artifacts from Campbell’s early years on a farm in Arkansas, his guitars and other instruments, a collection of golf paraphernalia, family photos and stage-worn clothing.

In the evenings, the museum will be used for live music venue The Rhinestone Stage.

“Glen was bigger than life,” Ric Olsen, Clearbrook Hospitality president, said in the release. “His global superstardom left us with such incredible music and experiences that a museum is only the first step in bringing all of what made him special to his many fans and fellow musicians around the world. We are honored to be working closely with the Campbell family to create a museum and entertainment venue that truly honors his amazing voice, musicianship, his humanity and his gift of storytelling.”

Kim Campbell, Glen Campbell’s wife of 34 years, said she is pleased her husband’s legacy will be honored with the cultural attraction.

“It’s with a big heart and sincere gratitude that we share Glen’s memories and cherished personal possessions with his fans and the world,” she said.

The release does not include an architect or general contractor for the project. In addition, a cost to undertake the effort was not disclosed.

Country-pop legend Glen Campbell will soon join other iconic stars including Johnny Cash and Patsy Cline with a museum and performance venue celebrating his legacy in downtown Nashville. Marking the second anniversary of the musician’s death on August 8th, 2017, Clearbrook Hospitality announced plans today for the Glen Campbell Museum and Rhinestone Stage.

Situated at the corner of Broadway and 2nd Avenue in the heart of Music City’s bustling entertainment district, the venue will feature interactive displays from different stages of the entertainer’s life and career, including Campbell’s tenure as a vital part of the cadre of studio musicians known as the Wrecking Crew, who played on countless classic recording sessions for artists from Elvis Presley to the Mamas and the Papas. Campbell’s string of influential crossover hits, including “By the Time I Get to Phoenix,” “Wichita Lineman” and “Rhinestone Cowboy,” as well as his work in television and film, will also be represented in the 4,000-square-foot museum, with previously unseen artifacts, photos, stage costumes and, of course, several of his guitars and other instruments. The Rhinestone Stage will feature live music nightly.

Completion of the Glen Campbell Museum and Rhinestone Stage is slated for early next year. A gala grand opening will follow, with live performances by members of the Campbell family as well as friends of the Country Music Hall of Fame legend.

On the 2 year anniversary of Glen's passing, the Campbell family is proud to announce that the Glen Campbell Museum and Rhinestone Stage will open in Nashville in early 2020!
“I am thrilled that Glen’s musical legacy will be preserved and celebrated in such a beautiful and enduring way. The museum is sure to inspire countless musicians and music lovers while continuing to entertain his lifelong fans and share his amazing gifts with generations to come. It’s with a big heart and sincere gratitude that we share Glen’s memories and cherished personal possessions with his fans and the world.” - Kim Campbell
The museum will feature more than four thousand square feet of never-before-seen artifacts from his early years on the farm in Arkansas through his climb to super-stardom, including many of Glen’s legendary guitars and instruments, his extensive collection of golf paraphernalia and intimate family photos as well as stage worn clothing and much more. In the evenings, the museum will transform into The Rhinestone Stage - a unique, state-of-the-art live music venue.
We can't wait to tell you more about the exciting plans that we have for next year. LIKE and SHARE the pages and sign up for our museum newsletter for updates and offers.
www.glencampbellmuseum.com
We love and miss you Glen.