Records and Memorabilia: Real or Fake

Fan photos and memorabilia talk. What collectibles are you searching for?
Post Reply
21 posts

Thanks Mike. Very cool. I cannot decipher any release year but seeing that these albums are called Goodtime Album Vol. etc. they must released around the time the show aired. And now I am thinking, didn't I read somewhere that the Goodtime Hour aired in Honk Kong? In that case, the release of the album set starts making sense to me. I am really curious to know how many volumes this set has and what the last volume is. That will be a great indication for a release date. Thanks for posting!

Hi Cowpoke,
Here are the pictures of the Glen Campbell album I was talking about.
Regards,
Mike 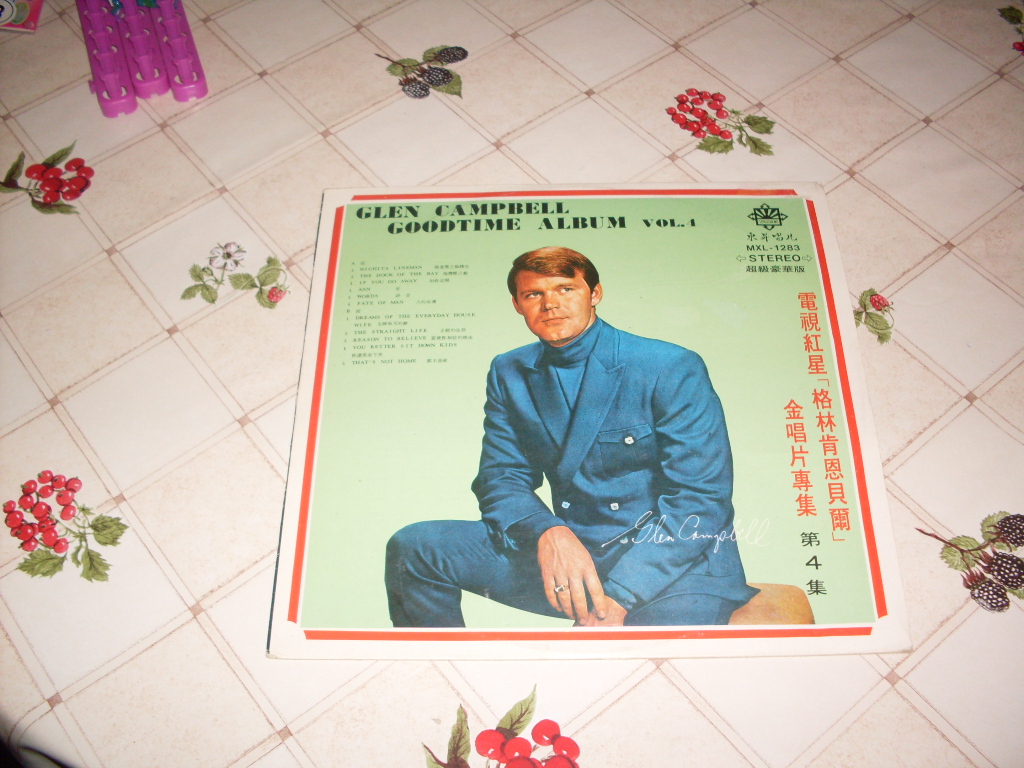 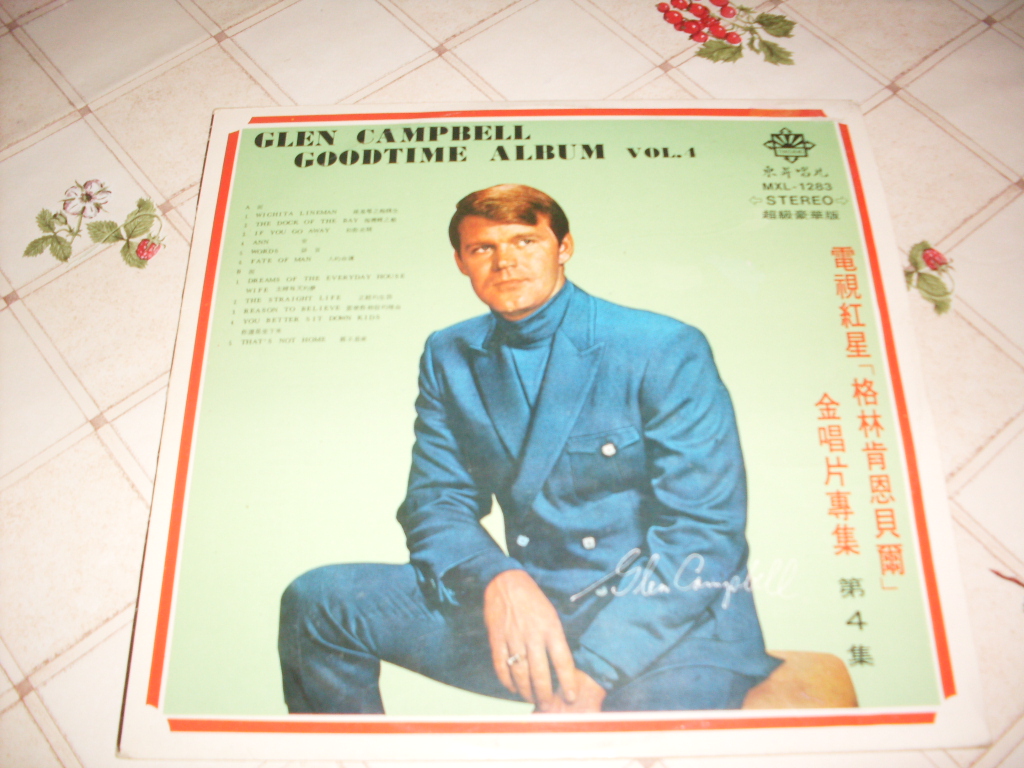 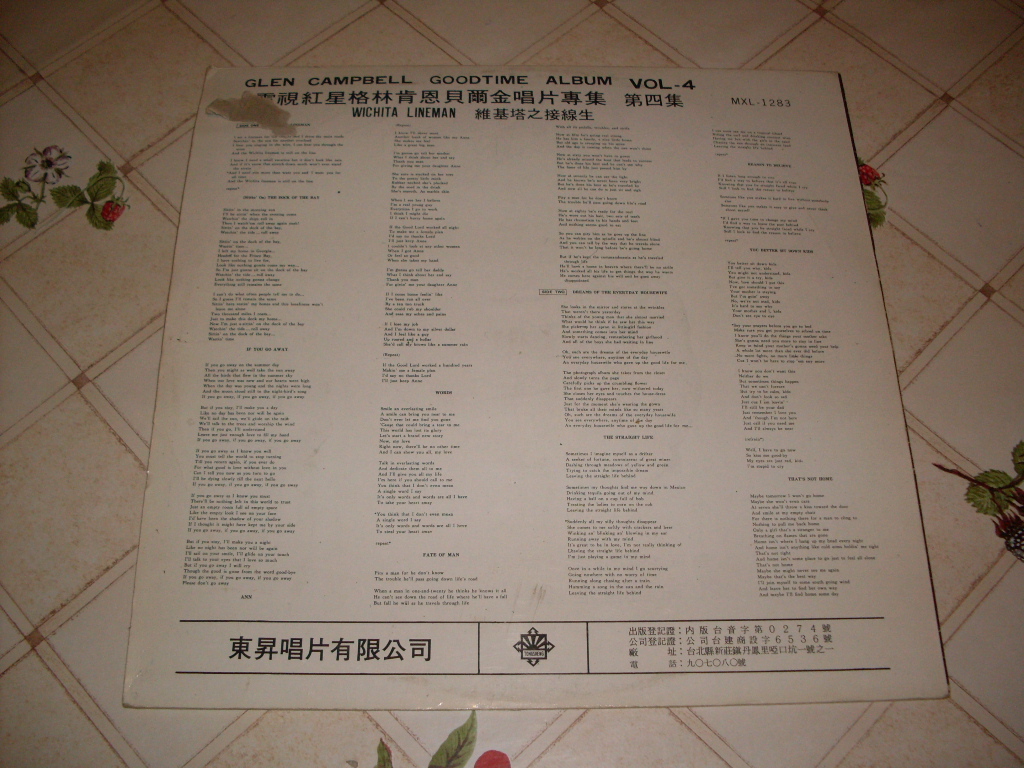 Great! Looking forward to it!

I will Cowpoke. I haven't had a chance the last few days but will do it soon.
Mike

Hi Mike, that is fascinating. A chinese boxset of Glen Campbell albums? I never heard of it before. Does it have a date printed somewhere? Would it perhaps be possible to post a picture of the front and backcover? I would love to see it.

Arlw, do you have chinese albums or singles in your Glen Campbell collection?

Here is something strange. I was out at work the other day and a friend popped by with 3 records which he thought I might like to have (He knows I am a big Glen fan) the albums were Live in New Jersey (UK release single album) ST21444 and the Basic album EST 11722. That was fine, although I already have these albums, but the third album was a total shock as I had never seen it before. It is called Glen Campbell Goodtime album Vol 4 MXL-1283 This is essentially the Wichita Lineman album but obviously has been repackaged as a box set. I thought it was a Japanese release as the cover has what I thought was Japanese writing, however I have been told it is Chinese. ( My son is dating a girl from China and she confirmed it was the case. She recognised the record label as being very big in China.(Tongsheng) The logo is of a rising sun which I would say be a Japanese symbol, based on their flag. The cover has a picture of Glen in a blue suit and blue polo neck jumper. It also has his signature printed on the front as well. Does anyone know anything about this collection. Was it like the UK box set called the Great Glen Campbell. I can't find anything on this and I haven't had a chance to ask my friend where he found it.

Hi, Elusive Butterfly!
Don't be embarrassed. I do this ALL the time. In fact, I had to create a spreadsheet of Glen's songs on his Studio and Live albums to help me quickly identify song titles. There are 785 songs listed in this spreadsheet and it doesn't include the "I'll Be Me" Sound Track songs yet!
You are now up to 61 albums? That's fantastic! These albums must look outstanding as framed Glen art on your walls!
Did you hear that "I'll Be Me" will be released on vinyl? I can't wait to see that dreamy picture of Glen on the I'll Be Me CD on a standard size album cover!

Also, "Rhinestone Cowboy" is being re-released as a 40th Anniversary Edition; we haven't seen a picture of this album cover yet; it may just look like the original. It's hard to keep up with Glen Campbell news lately.
I am excited for you -- now you have a turntable and can listen to the albums you haven't yet heard; you have a few songs yet to discover!
After again watching the video of Emmylou and Glen on "You Are My Sunshine", I understand what you are saying about Emmylou's voice being too prominent for their duet. Glen sounds more like a backup singer. Hmmm. Thanks for your feedback!
Can I ask which albums you are still looking to add to your collection? I have a few duplicates but probably not the ones you need.
Dee

Hi Dee.
Thank you so much for your reply. And you leave me rather embarassed. Beacause I do have all these framed albums up on my wall. 61 of them actually. But there are a few of them, that I haven't yet heard all the songs on (bought some of them on e-Bay)..yet. And when you say that this great song, that I've come to love so much, is on Glen's "Still Within The Sound Of My Voice" album, I must say......Geez Dee, I have it hanging on my wall. And I never knew that this song was on it! So I went out and got myself one of these turntables. So now I can go through all the albums, that I still think there migh be one or two songs on, that I haven't yet heard. Can't be many though. I must have heard most of what our beloved hero has created for us, through a lifetime. To have Emmylou Harris as a backup on "Letter To Home" and "I'll Be Faithfull To You" was a brilliant idea. I love especially the last song. Thanks for sending me a link to the video with "You Are My Sunshine", with Glen and her. Not the best duet in my opinion. It's obvious, that Glen holds back his strong voice, to not drown her vocal. And the exact opposite happens. Emmylou drowns Glen's golden voice, by being much too loud. In my opinion that is!
Thank you for your feedback sweet Dee. Elusive Butterfly.

Dee, I believe You Are My Sunshine was the only duet Glen and Emmylou Harris did during the Silk Cut Festival.

Thank you so much for posting your great question and also for sharing Roy's wonderful video with us. (I always look forward to hearing each song he uploads to YouTube! I subscribe to his channel.)
You will be happy to know that this duet is on a Glen Campbell album: "Still Within the Sound of My Voice", Glen's 43rd album released in 1987.

Glen and Emmylou Harris duet on a non-Glen Campbell album:

An Emmylou Harris album re-released in 2004 by the name of "Blue Kentucky Girl". This re-release was issued on CD with two previously unreleased bonus tracks. One of the bonus tracks is a duet with Glen and Emmylou on the song "Cheatin' Is". Only this reissued album has the bonus track with Glen.

Emmylou Harris also performed with Glen at the Silk Cut Festival in the U.K. in April 1984. They performed "You Are My Sunshine": https://www.youtube.com/watch?v=B72ObGfDxGI" onclick="window.open(this.href);return false;
They might have performed another song together at this festival; does anyone on the forums know?