A somewhat rare Glen Campbell bedspread is listed on ebay today. I believe it was originally sold by Sears in the U.S. 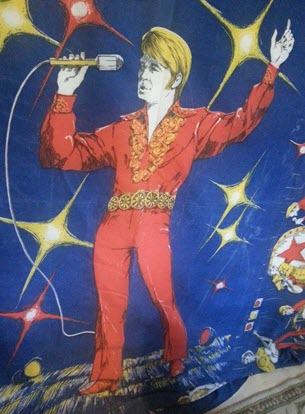 Perhaps this info about The Legacy box set will make you feel better:

There are two of these box sets currently listed on ebay.com/US. One is "Brand New" and selling for $124.88.
The second one is pre-used in "good condition, minor wear with good spine and edging; CDs have light scratching." It is selling for $69.95.

For a real McCoy at around $73. for an unopened box set, you will have obtained a good deal (even if you add return shipping to it, I am guessing).

In answer to your question, I also have an autographed edition of Glen Campbell Live With The South Dakota Symphony. Glen's autograph is in silver ink on the disc, signed in the blue background, not on the guitar.
I bought it signed, GC didn't sign it in person for me, but it looks like his signature. I would love to know if PBS sold these discs signed (as a thank you gift for donating to PBS) or if Glen signed these CDs in person for concertgoers. Maybe the latter because I seem to remember seeing one of these albums listed on ebay with both Glen and Debby's autographs.

I really admire you for setting a goal to complete your GC album collection and meeting it -- having collected so many albums in such a short time without going to the poor house! lol I am amazed that you were able to find some of these albums within a short time because some recordings are more difficult to find now. So, kudos to you and happy listening! You have achieved your "record collector's dream"!

I agree w/ you: the "I'll Be Me" OST is a cause for celebration. I want to write a review of it for the forums, but I don't think that I can do it justice. BTW, if you don't have the vinyl LP released on April 21st, it is worth the investment for a collector and a fan, I believe. A GC friend rates it highly in terms of quality; the pressing being outstanding. The gatefold album is like something from the past that you rarely see these days.

Thank you for your great reviews on amazon.com of RC40 and Glen Campbell American Treasure Set on the Surfdog label. This box set is pricey, but, it IS a treasure, especially the rare digital remasters that you mentioned AND the DVD. I trust you'll enjoy this set and that the clips from the Goodtime Hour will bring back happy memories for you and your family!

If you are interested, let me know which Christmas albums you are seeking. "That Christmas Feeling" vinyl LP was reissued on CD as "Icon Christmas". I have an extra copy of this Icon album on CD that needs a good home.

Rob, thank you for sharing your enthusiasm with us about collecting Glen's albums and also your advice: "Dream big, love large, help comes in all kinds of shape of forms." I think I understand what you mean by help comes from all kinds of shape of forms. Glen Campbell Fans are The Best and some are able to be very generous by sharing information and/or helping one to build a collection by gifting records. And now you are paying it forward to other fans and me -- by sharing your great list of rare singles on 45s as well as your "Champeen" posts! :0

You have a great week, too!

Thank goodness, Cowpoke was able to affirm the rubber stubs which hold the Glen Campbell Legacy box set discs are a bit of a problem, it's the only time that I had to file a claim on amazon.com to get a full refund, the seller was moving forward that it was my fault, their box sets come unopened from a Warehouse all the way from Germany, even though it was a bit of a pain to return, I'm seriously considering going through them again, around $73 for an unopened GC Legacy box set with the cellophane and sticker on it.

I am wondering how many people own an autographed edition of Glen Campbell Live With The South Dakota Symphony where the signature is signed on the white guitar fret board on the front album cover, I''m assuming that it may have been a trend for awhile and I am one of the lucky recipients, a seller from Florida.

When I started collecting Glen Campbell reissues on CD, I don't think that I could have found and bought so many in such a short time without the help of Ace Records and the Raven Label.

Last fall, I decided it was time to buy the complete works of Glen Campbell and when I added up all the main titles I owned on CD it was over 31 albums.

The next thing that I had to was find somewhere on the internet that could show exactly how many many album titles that he had.

I do believe at the time it was 63+ main albums.

How would you feel if you had already owned an excess of 31 titles and had around another 32 to go.

I hunkered down and started collecting a little at a time each month, and wouldn't you know, it only took around 5 months to get the other half, right now I only have three of his Christmas albums to go, which I am seriously thinking of waiting until the holidays.

A real cause for celebration, I look at the Glen Campbell "I'll Be Me" OST as his 64th main album.

At one time the Legacy box set held the record but to date the only ultra rare track on that box set is the digital remaster of Universal Soldier written by Bufft Saint Marie.

And so Surfdog is the "Champeen" for ultra rare digital remasters,.Another Fine Mess, God Must Have Blessed America and I Love My Truck.

The Capittol Records Glen Campbell Legacy box set shows a full color two page spread of all his main albums titles up to the Live With The South Dakota Symphony.

When I opened the package it was wonderful to see that I owned all the titles except the Greatest Hits album fronm the late 60's.

I'm telling you, if I can purchase 61+ of his main albums in a short amount of time, so can you.

Dream big, love large, help comes in all kinds of shape of forms.

Have a wonderful week everybody.

Thank you, for alll your support.

Rob,
Thank you for posting about the rubber stub casing for the CDs in the Legacy box set. I was not aware of this issue. I have had the Legacy box set for years, but have never opened it! When I finally crack it open, I'll be sure to be super careful about removing the CDs.
Could it be that the CD was defective or brittle for some reason? Perhaps if you would contact the seller, they will send you a replacement CD (without your having to buy an entirely new box).
Dee

I know what you are talking about Rob. The Legacy Box does have that strange rubber stub What a pity that you broke one of the CDs! That's really terrible. I got mine second-hand so maybe that's why I didn't have the same problem? Good luck on finding another copy. Was it difficult to find one by the way?

Be very careful when you buy and open the Capitol Glen Campbell Legacy Box Set, I cracked and broke one CD because Capitol chose a different way to pack the CD;s than normal.

That''s what is the problem with a prototype you know, a new design that looks goods on paper doesn't necessarily work in the field.

Is there anybody out there who bought the GC Capitol Legacy Box Set that knows what I am talking about.

Cd's are normally held in place with plastic teeth, sometimes they chip off and outwear their purpose, but for for better or worse, they are the tried and true formula to package CD's.

I'm sure that I am not the only customer that trouble pulling the CD''s from the unusual rubber stub casing, I am not returning my item, and plan to buy another one on my own dime, I'm just saying if you are buying the Glen Campbell Legacy Box Set fior the first time, be very, very slow when you pull the CD out of its' housing for the first time, I'm guessing whe the warm product was assembled hot off the press, it became ironed or glued together, but can be saved by being careful.

I have a Master copy on VHS Tape that I can convert to DVD for you. I don't think there is any copygurad on the tape, so the transfer should go ok.

Now, I've been searching for a long time, to find this outstanding !977 concert in London, with the Philharmonic Orchestra, on dvd. The only one I found, seemed to not ship to Denmark. Does any of you, know if there's a chance to find it anywhere? Elusive Butterfly.

Re: Questions About Collectibles

Hi, Arlw,
About the Debby Campbell cassette, does Debby know how many cassettes were produced/sold? A 100? A 1,000? More?
How rare is this cassette in comparison to "United We Stand", the cassette with both Debby and Glen?
Thanks,
Dee

Re: Questions About Collectibles

Still looking for Debby Campbells cassette of BURNING BRIDGES. Cowpoke has a copy..maybe he can assist me and others. It is impossible to find. I emailed Debby and SHE only has one copy! Could use some help here as that is a very collectible item!