"Where's the Playground Suzie" on acetate recorded on April 2, 1969, from the collection of a fan in Denmark, our forum friend "Erik the Dane".
Thank you for sharing these photos of this historic record from your Glen Campbell / Jimmy Webb collection, Erik!

Note: Although an acetate looks like a vinyl record, it is actually a metal or aluminum plate covered in a layer of acetone. In a studio environment, acetates were used prior to finalizing a vinyl record for testing the quality of a tape-to-disc transfer by the sound engineer, for comparing different takes or mixes, or for providing early preview copies of new singles to radio station DJs. Acetates were also used for demo purposes for pitching songs.

Intended primarily for test purposes, acetates were almost never sold to the general public and are the rarest format of all. If the acetate was rejected because of poor quality or because the artist decided to use a different take of the song, then the acetate may be rare indeed particularly if it is the only one that survives post-production or if the artist rejected the cut altogether.

If you are lucky enough to find an acetate, it may sound great or it may be of poor quality if it has been played more than, say, 10 times in its lifetime. Audiophiles suggest playing it once in order to transfer it to another medium that is durable.

Acetates are still in use. Check out this independent film documentary, "The 78 Project", that screened at the 2014 Nashville Film Festival. http://the78project.com/the-78-project-movie/" onclick="window.open(this.href);return false; 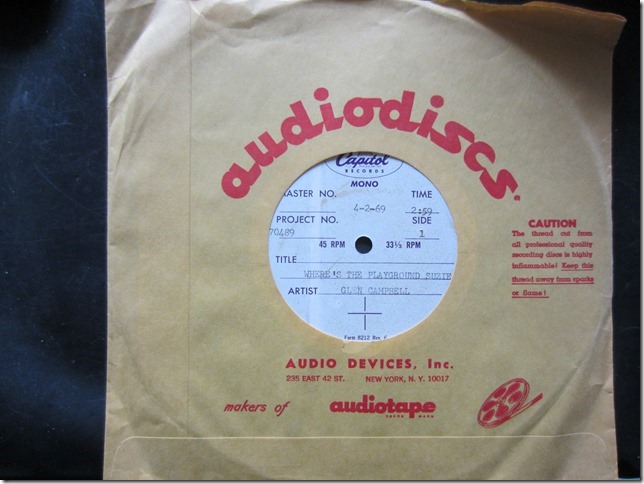 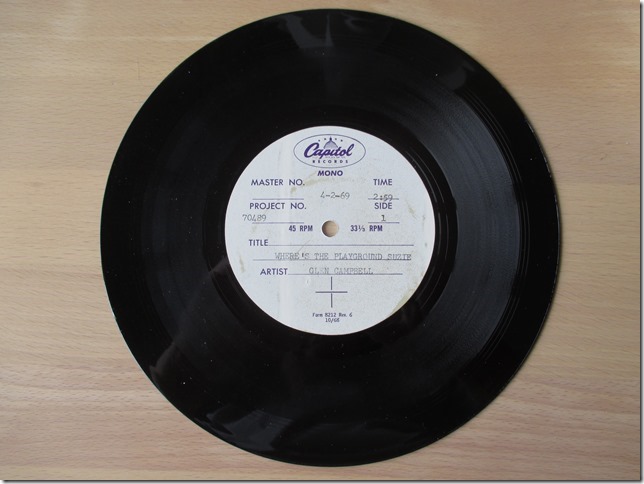 Hi, Cowpoke, I looked up a few other ads and the font size of Jud's name as the opening act is the same or very similar.
There there is Lonnie Shorr who had what appeared to be equal billing.
Fred Smoot and Jenny Jones, not so much.
Note in the bottom photo: Carl Jackson's name was in small font. Perhaps at that time he was part of Glen's band?

A very interesting find in this same photo: the guitar belt buckle Glen is wearing. I have never seen that belt buckle, have you? 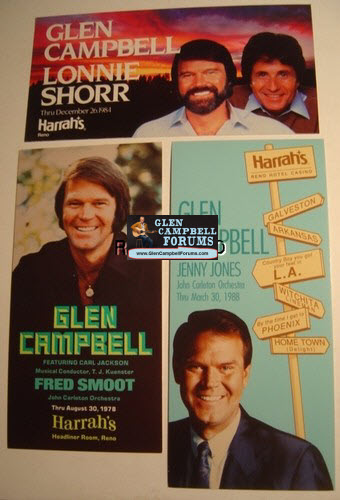 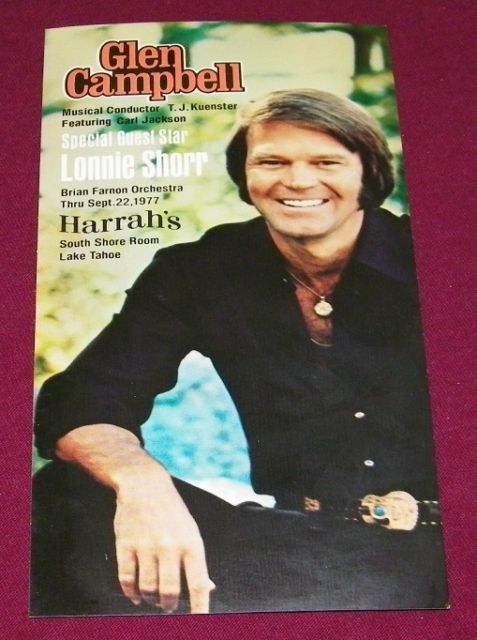 Very cool Dee. I notice again that Jud's name is printed in quite a large font for a support act. Was he that big at the time or did Glen allow him his place in the spotlights?

We were recently posting about Jud Strunk's penned song, "My Country", performed by Glen at concerts in the seventies.
Found this advertisement postcard from 1974: 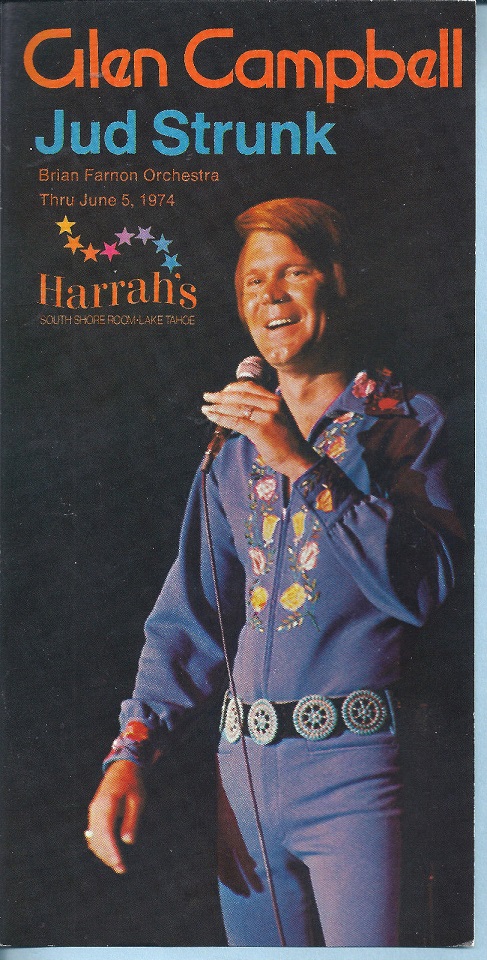 Here is a special collectible up for sale on the secondary market that I thought fans may like to see before it ends up in a private collection again: a golf flag from a Bob Hope Chrysler Classic, formerly known as the Bob Hope Desert Classic, year unknown (1993 or later). The Classic, held annually in Palm Springs, California, consistently attracted celebrities (many of whom were friends of Bob Hope's) who joined the pros on the course. Signatures by attendees on this 17" x 13" flag include baseball players, football players, a boxer (Oscar de la Hoya), actors, and singers including Glen Campbell! It is listed for just under $8,000. 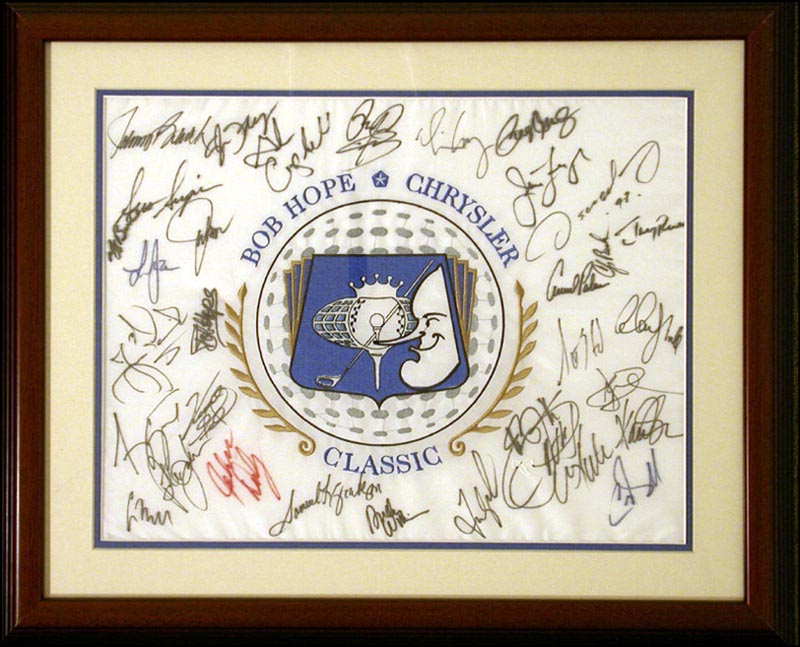 Pictured is a "Norwood" movie lobby card. Lobby cards used to be sent out by publicity departments of Hollywood studios to movie theaters to use to advertise and create interest in "coming soon" or newly-released films. Cards were created in sets of 8-20 using different still shots from a film. A theater manager would display lobby cards near the box office and/or in the theater lobby.

Anyway, it struck me that this Norwood lobby card captures a scene similar to the one shown below--in the poster of GC and Kim Darby in "True Grit"!

Glen is seated on the left in both images; Darby/Tisha Stirling is seated on the right.
Glen wears a blue shirt in both the poster and card images.
His hair style and length are similar, you think?
Both couples are eating at a round table in a dining area (dining room / kitchen).
There seems to be tension between both couples (which we know to be true after seeing the films). Different people, different lifestyles.
One difference that stands out to me is that Kim Darby is leaning toward GC. Tisha Stirling is not exactly leaning back, but her arms are locked and she is bracing herself from leaning forward.
Could it be a coincidence that both scenes are similar? Also, that both scenes were used to publicize a movie? Hmmm.... 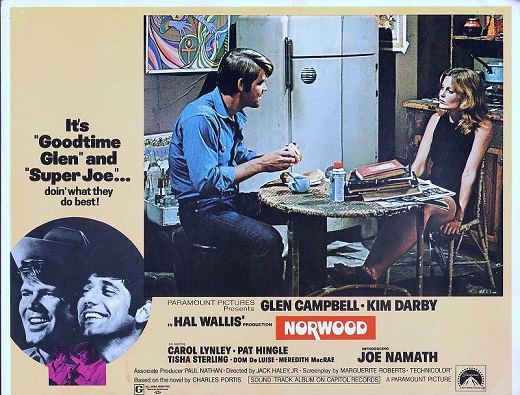 Another unusual "True Grit" poster with what appears to be two photo insets by artist Lomasney (google images).
No copyright infringement intended.
It doesn't appear that this one was created for a theater lobby in 1969, not with the words "Academy Award Winner" in front of John Wayne's name and "Best Actor" behind his name.
Unless these words were painted in after Wayne won the Academy Award in 1970. 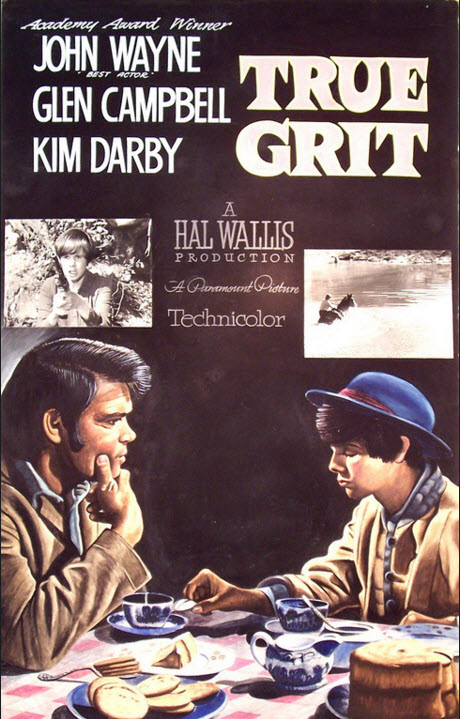 Created by John L. Lomasney.
Painted in gouache on cardboard.
Lomasney worked for a Hawaiian theater chain as an artist.
He was hired "to create more colorful and graphic posters than those supplied by the movie studios. Lomasney moved to Hawaii in1936 and died at the age of 90 in 1989, and his works have been actively collected by knowledgeable collectors and tennis legend John McEnroe who displayed many in his New York gallery."
Sold for $500 in 2015. Had some damage in the corners.

A lucky fan won this auction! 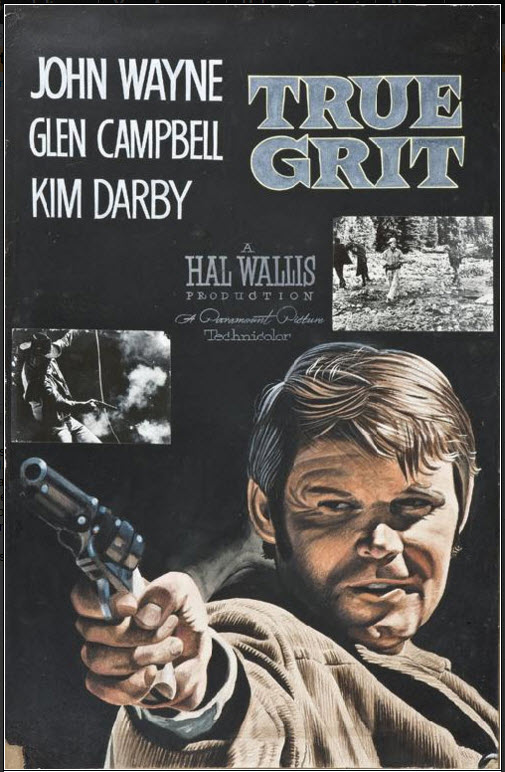 Got the 2 record awards of Glen Campbell today---love them!!! The "That Christmas Feeling" one is a vertical one so it's 25 inches down by 21 across--The Wichita Lineman one goes horizontally --that one is 25 across by 20 down--I thought they both went the same way--still have a place for them but will have to do something creative w/them!!! Awesome pieces and the COA is included..

Amazing stuff. Thanks for sharing Arlw and thanks for posting Dee!
Michel