I just purchased the new Glen Campbell Christmas Special tonight, after seeing the picture of him holding his baby (below).

Thank you, Elusive Butterfly for opening up and sharing what part of the world you're from, it means a lot to me!

Everyone who comes and visits here are in my daily thoughts and prayers.

Have a wonderful weekend.

Thank you so much Dee, sweet sister. New to me and I absolutely love it. Isn't it as if pictures with Glen, are the very best, when not "arranged" too much. No, what am I saying?! They're all great! But those, taken, when he's not especially paying attention, because he's doing something else.........uhmm <3 And you can say that again, me being the greatest Glen fan in Denmark. And I'm proud to be that. Thanks again dear Dee. Elusive Butterfly.

In an interview Glen once said that he wrote the music for the part that start with "there is someone who really needs you..." when the melody really is really soaring.

Regarding Glen Campbell not receiving credit for writing "Turn Around, Look At Me", the closest to an answer might be found in the following interviews.

Gary James of http://www.classicbands.com" onclick="window.open(this.href);return false; posted an interview on his website with Glen Campbell from around 1994. Glen was frank about not receiving songwriting credit for "Turn Around, Look At Me" when he was with American Music Publishing Company in 1961 prior to signing with Capitol Records.
"Q" is Gary James.
"A" is Glen Campbell

Q - You didn't name the person who cheated you out of royalties while you were a songwriter at American Music. How come?

A - He came out of the woodwork and he said I changed a chord in it. I just didn't want to name names. He knows who he is.

A - (Laughs) Well, he took the award for writing half of "Summertime Blues" with Eddie Cochran. I'm sure he wrote half of that, too. It was like "Turn Around, Look At Me".

If you do a quick Google search on "Eddie Cochran" and "who wrote Summertime Blues", you will find a familiar name: Jerry Capehart. He was a producer at American Music Publishing Company when Glen worked there.

In 2013, Eddie Daniels, a rocker and songwriter, shared his own history with Jerry Capehart in an interview with Mike Hurtt for "Eddie Daniels: The Secret History of Hollywood Rock ‘N’ Roll":

It was at American Music that he (Eddie Daniels) met Jerry Capehart, who was already managing Cochran, Gorshin and Ashley. “Sylvester Cross was an older person,” Daniels explains. “I guess in those days he had to be close to being in his 70s. If I remember him right he dressed like my grandfather; wore a belt and suspenders. Glad just to be living. He was the type of person that just loved to go fishing. That’s why he had Jerry Capehart working for him as a front man. Capehart wanted to manage me. He said, ‘We’ll record you but let’s write some music and see if we can get some airplay out there for you. And that’s how he stole a lot of my stuff.”

Indeed, Capehart managed to insert his name as co-writer on many things that Daniels wrote at American Music — including “Little Lou” — a situation that Eddie is working to remedy today.

I sure can Mike, no doubt about that one!

arlw,
I always thought Glen was really singing about his own experiences when he sang "You gotta sing it nice and loud for me Sonny" especially the line "that song we wrote was a hit but your name isn't on it." I am sure you could feel the bitterness in that phrase.

Mike,
Thank you for your post--I think that scene/picture from the 45 rpm Promo, might be from "Norwood"!!! Good Eye, Mike! I remember them sitting too and singing!!

Dee, Japan is notorious for giving credit to the correct people-I have so many Japanese records with Glen Campbell as the writer/co-writer...For some reason Japan really does Glen Campbell proud! I think that's why he always liked performing for them!!! The USA records are not that generous in putting his name down--On the Crest record they only give credit to Jerry Capehart and that really is a shame. Put it this way as Glen said it many years ago at a book signing here in Dallas---He would rather RECORD THAN WRITE!!! The $ are in the records as the fans buy them, and also when he wasn't listed FIRST, he was GIVEN NO CREDIT, and that actually pissed him off! So, I told him-I am so glad you decided to take the guitar and play!! "Quoted from me and Glen"
ar

Great collectable arlw, Isn't that the scene from Norwood when Glen sings "Down home" while everyone is sat round the table?

arlw asked me to post photos of a new display she created using the promo recently purchased (see post below).
The first photo is the promo picture sleeve framed.
The second one is the picture sleeve displayed with two Japanese/Taiwanese coasters.
The third one is a larger picture of the coasters.
The fourth and fifth photos are of the framed 45 promo that coincides with the picture sleeve for "Turn Around, Look At Me"--just in a larger frame.
Glen Campbell co-wrote “Turn Around Look At Me” with Jerry Capehart but was never given credit as the co-songwriter.
Glen wrote ”Less Of Me” (on the flip side).
He performs the vocals for both songs.

(What I find interesting is that the Japanese version of this promo gives Glen Campbell the co-songwriter credit on the label for "Turn Around, Look At Me", which is correct. [See the sixth photo which is a closeup of #5.] However, the Crest label, among other labels for other artists who recorded this song, only gives the songwriting credit to Jerry Capehart. Also, the Crest 45 has "Brenda" on the flip side. Super nice find, arlw! --Dee)

[Click on each image to enlarge the viewing window as needed.] 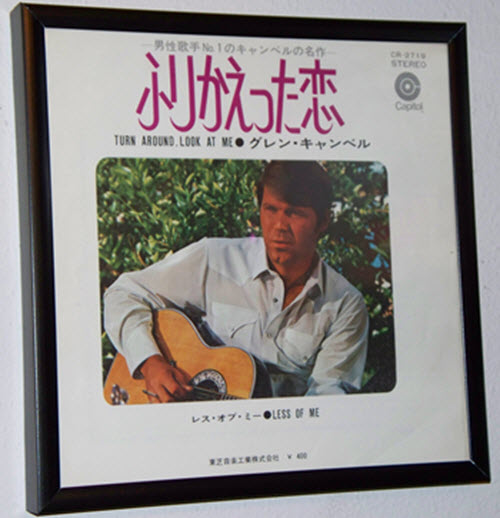 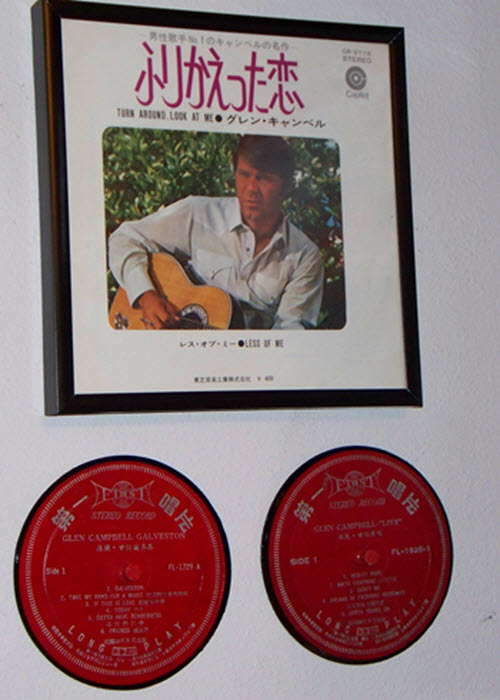 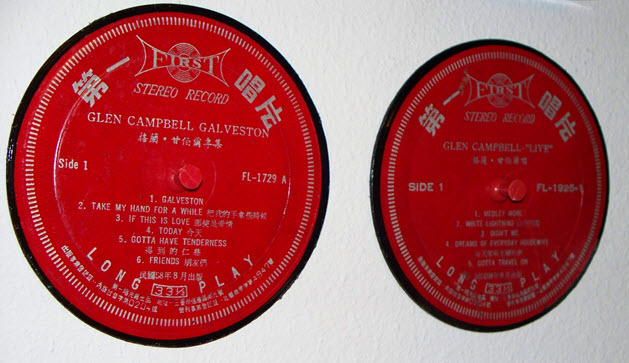 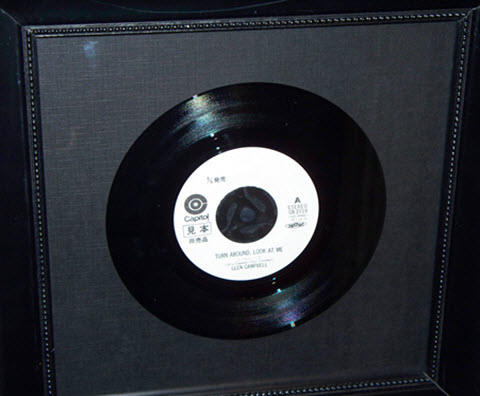 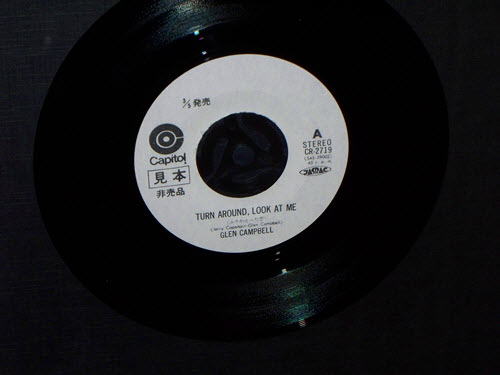 I would love to find a Glen Campbell Bobble head but can't locate it anywhere---Does anyone have any source for this item????It would be a neat item to have.....
Thanks for your help in advance.....