Thanks, Wayne.
It's really wonderful that some of Glen's guitars have ended up with guitar enthusiasts / collectors / musicians like yourself who know their value (intrinsic) and history -- and take the best of care for them.
Thanks again for sharing your photos and information here.
I'll go in half with Jay to buy that snowmobile!

Dee,
Wayne does own the guitar and I posted his pictures in the original post.
Wayne is hoarding several of Glen's guitars. I know where he lives, but would have to get a passport and probably a snowmobile to attempt to bring them back to their rightful country of origin.

Thanks Wayne! I can't imagine how that feels to have that guitar, and watch it 44 years ago. The irony is...all of that freakin out by Charlie...all of that R&D by Ovation...Probably around the clock production...and he isn't plugged in. Yeah...it all looks and sounds ad libbed, right from the recording...but still...

This is the only video I have come across of Glen playing the Ovation 1624 (Proto X014). From a 1971 Goodtime Hour episode. It is quite identifiable in the opening seconds which show a closeup of the guitar. It is the only Prismatone equipped, initialed 1624 with a non-rectangular bridge. The label is not usually visible in the sound hole because it is on the upper-side of the interior of the bowl.

Oh Jay,
I feel like a child looking into a sweet shop and no money in my pockets.

The Ovation 1624 was a “hybrid” classical nylon string guitar, completely crafted around Glen’s vision of the type of nylon guitar he wanted to play. The pickup constructed for Glen, for this guitar, blasted Ovation into the stratosphere of the guitar world.
It first began when Jerry Reed joined the Goodtime Hour. He was playing a Baldwin 801CP nylon, which had a Prismatone pickup that allowed Jerry to amp his classical guitar. The nylon guitar that Glen used at the time was an Ovation, as he was Ovation’s most visible and popular endorser. The problem was, the Ovation had to be mic’ed, because Ovation (as most companies at the time) did not have an acoustic that had a pickup and could be amplified.
Having to mic a guitar, back then, severely limited how that guitar could be played. It typically meant you had to be seated in front of a mic stand with a separate vocal and instrument mic. What did Glen do…he started playing one of Jerry’s Baldwins. In 1970, he played the Baldwin on the Tonight Show, the Goodtime Hour and on Tom Jones show, as recorded in this video:

Are You From Dixie

But Glen’s appearances with the Baldwin were short lived.

Charles Kaman, creator and owner of Ovation, had a fit. Glen’s show was popular and Glen had single handedly turned the fledgling Ovation company into a up and coming guitar company by playing the roundbacks on his Goodtime Hour…Charlie didn’t want that to happen with Baldwin (who had just purchased Gretsch). The R&D guys at Ovation immediately began to design a nylon to appease Glen’s desire to be able to plug in.

They developed a hybrid type nylon that was 14 frets to the neck (instead of the 12 typically seen on classical guitars), it had a 1 7/8 width fretboard (instead of 2”, typically seen on classical guitars) and it was built on the artist bowl, which Ovation had designed for Glen the previous year. This designed matched Glens style of play with a regular acoustic guitar and was a nylon. They purchased around 100 Prismatone pickups from Baldwin and quickly assembled this prototype nylon “X014” (which would eventually be the Model 1624) for Glen (Thank you Wayne Reid for providing us with these beautiful pictures of your guitar):

The R&D department had also developed another nylon (prototype X010) for Glen, using a Barcus Berry pickup system. This pickup was placed on an Ovation 1123 classical guitar. Due to the manner in which Glen played, Glen felt that the Prismatone gave a more balanced amplified response of each string and chose to play the X014. There doesn’t appear to be any pictures or videos of Glen using the X010 (once again, my appreciation to Wayne for allowing us to use his pictures for the Barcus Berry prototype X010).

Glen immediately started using the X014. And guess what…Jerry started using one also! In fact, Jerry liked the one he was using so much, Buddy Blackmon states, that he had Ovation build him a couple just to have around.


Jim Rickard, from Ovation, quickly designed and produced a pickup for Glen’s nylon Ovation. It was a brilliant design. It was built into the guitar, could be used on nylon and steel strings, was adjustable, and significantly reduced feedback. Ovation added a volume and tone control…all of this because Glen had used Jerry’s Baldwin. Once Glen went on air with this, Ovation instantly became an industry standard in acoustics, offering a mass produced acoustic/electric. It would take the competition 10 years to catch up. This pickup was used by Ovation until the day they closed the plant.

And to support his fondness for the Prismatone 1624, it is the only nylon acoustic seen on the “stairs” photo taken in his Malibu home. 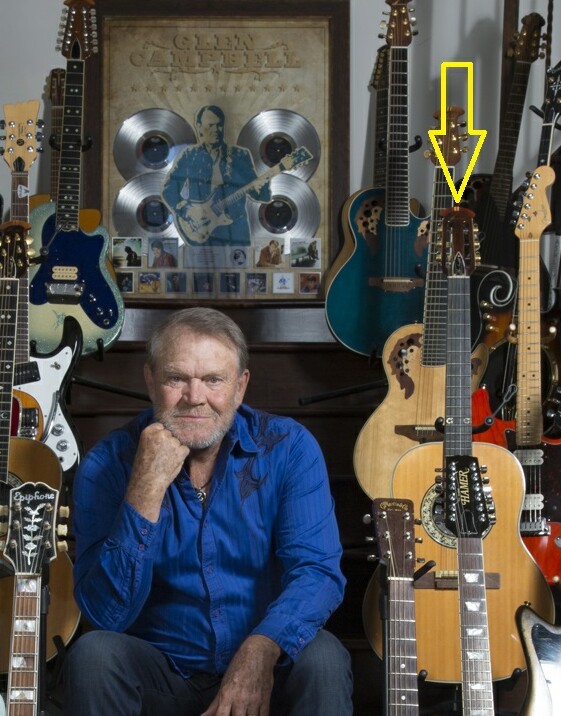