The Curse of Semie Moseley's Acoustics

Semie Moseley never really knew what he was doing when it came to making acoustic guitars, he was more interested in making electric guitars. The woods were not properly dried out and the construction wasn't beefy enough, and the lacquer finish was put on with too many layers, too quickly. A sum of all these parts resulted in very few of these guitars surviving...or even being desirable, other than for collecting. A quick look into the ones that have been on the secondary market will bear witness to what happened to Glen's guitar right away. 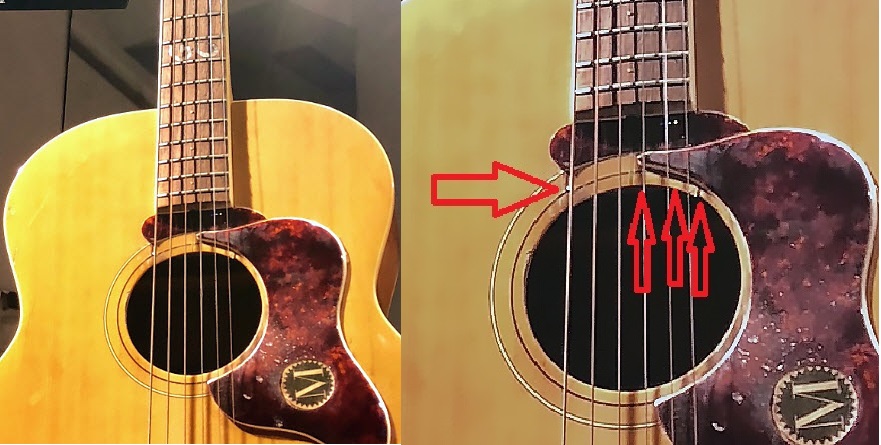 
By most accounts, the Balladere was made between 1966 and 1969. Glen appears with his Balladere in 67/68...transitioning to Ovation in the latter part of 68. In 1968, Glen and the Smothers Brothers hooked up and he hosted the Smothers Brothers Summer Show. Glen was playing Mosrites exclusively at the time and most likely had Semie make a custom Balladere for Tommy. It recently was for sale.


A quick look at Glen's and Tommy's Balladeers will show that Semie's design had a common structural flaw. Glen tried to hide his with a piece of custom tortoiseshell. I imagine Tommy played his once and returned to his Martin or Guild. Notice the cracks are almost in the same place. 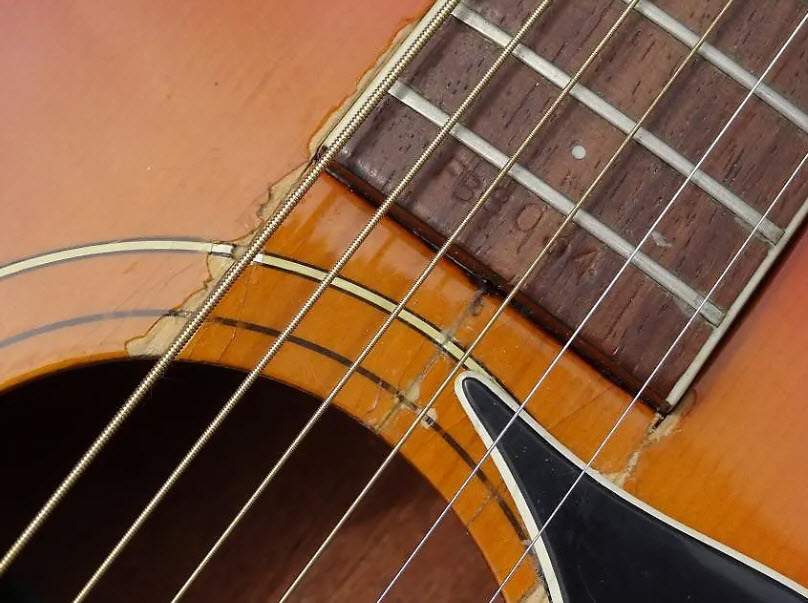 GLen Campbell's Mosrite Balladere is currently on display at the Musicians Hall of Fame and Museum in Nashville, Tennessee.

Joe Chambers, Museum Founder and CEO, shared this information about his exhibit:

"A friend of mine called me about this guitar. As with most of Glen’s guitars, Glen either gave away or traded his guitars for something he liked better at the time. The cost of the guitar or the brand name didn’t seem to matter very much to the Glen. He would trade a American made Gibson for a Japanese import Strat copy if it felt right to him. The fact of the matter is it really didn’t matter what kind of guitar Glen played because he could make any guitar sound great. I have seen pictures of him in the studio with the Wrecking Crew members playing a 60’s Japanese solid body electric guitar with a triangular shaped hole cut in the headstock. I have no idea what brand name it may have been but we’ve all probably heard him playing it on a Beach Boys record or something else equally as cool. The Mosrite acoustic on exhibit at the MHOF&M (Musicians Hall of Fame and Museum) can be seen on YouTube on the Glen Campbell montage. You will notice the small piece of mustache-shaped tortoiseshell pickguard material attached above the soundhole and directly underneath the end of the guitar neck. This was placed there to cover and support a crack in the top of the face of the guitar which ran all the way into the soundhole. It was probably a stress crack from the string tension pulling on the neck without proper bracing underneath the face of the guitar causing the soundboard to concave. You will notice on the video clips from the Campbell montage this guitar being used in the first few Goodtime Hour Shows. It’s easy to pick out due to the repair above the soundhole but after a few shows they replaced this guitar with a new one with a redesigned pickguard that covered all the space between the bottom of the neck and the soundhole." 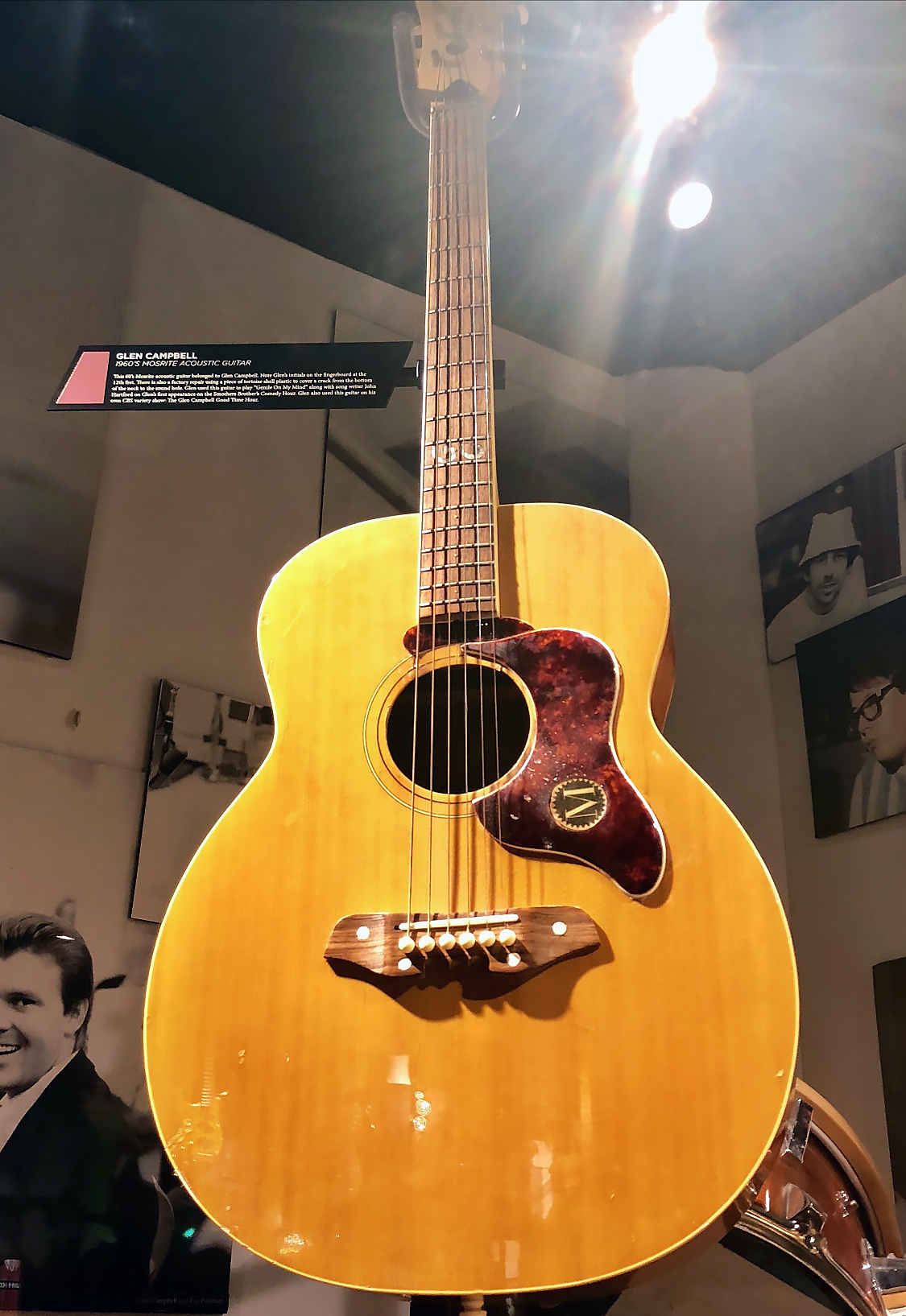 Glen plays the Mosrite Balladere I, Model 401, on an episode of the Summer Brothers Smothers Show, which aired August 4, 1968 on CBS.
Glen sings "Less of Me" with artists Judy Collins and Hamilton Camp.

Here is Glen, in the summer of 1968, on one of the episodes of the Summer Brothers Smothers Show, which was on CBS. 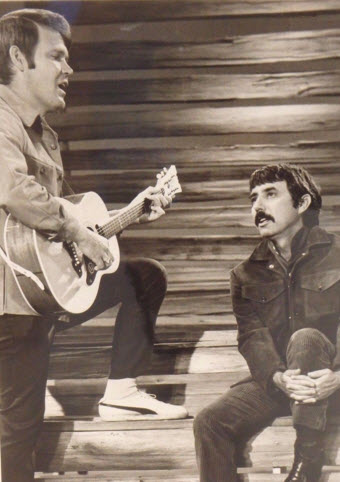 An eagle-eyed forum member pointed out that Eric is only playing the 12-string Mosrite acoustic throughout the video. Glen is seen holding the sixer at the end of the song.

I subjected myself to this song one more time to see that this indeed, true!

Now I see it! Thanks Wayne.

Thanks Wayne. When does Eric switch between the 6 string and the 12 string. I can't tell, it all looks like the same guitar to me!

...or at least, introduced them to North American television...

I thought this this would be an interesting video for this thread: Eric Clapton playing both of Glen's Mosrite acoustics, 6 and 12 string during this silly song from the Sumers Brothers Smothers Show in 1968. Glen introduced Cream to the world!