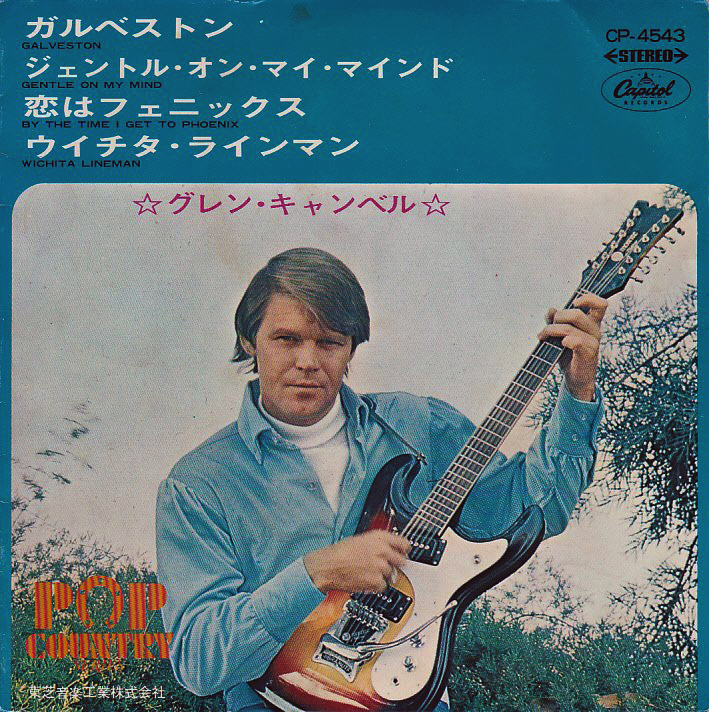 Re: Glen performing in 1965 in Vancouver with the Mark XII

jay wrote:Cowpoke flushed out this photo of Glen playing the Mosrite XII 12 string at 1965 P.N.E. Dance Party in Garden Auditorium in Vancouver, Washington. Once again, it appears that Glen was given this early Mosrite 12 by Semie, as he was captured at many events with it during '65.
Glen Campbell performing at 1965 P.N.E. Dance Party in Garden Auditorium.jpg


Just for information, if that's the PNE, and it sure looks like it, then that picture was taken in Vancouver, BC, not WA...

Glen performing in 1965 in Vancouver with the Mark XII

Cowpoke flushed out this photo of Glen playing the Mosrite XII 12 string at 1965 P.N.E. Dance Party in Garden Auditorium in Vancouver, Washington. Once again, it appears that Glen was given this early Mosrite 12 by Semie, as he was captured at many events with it during '65. 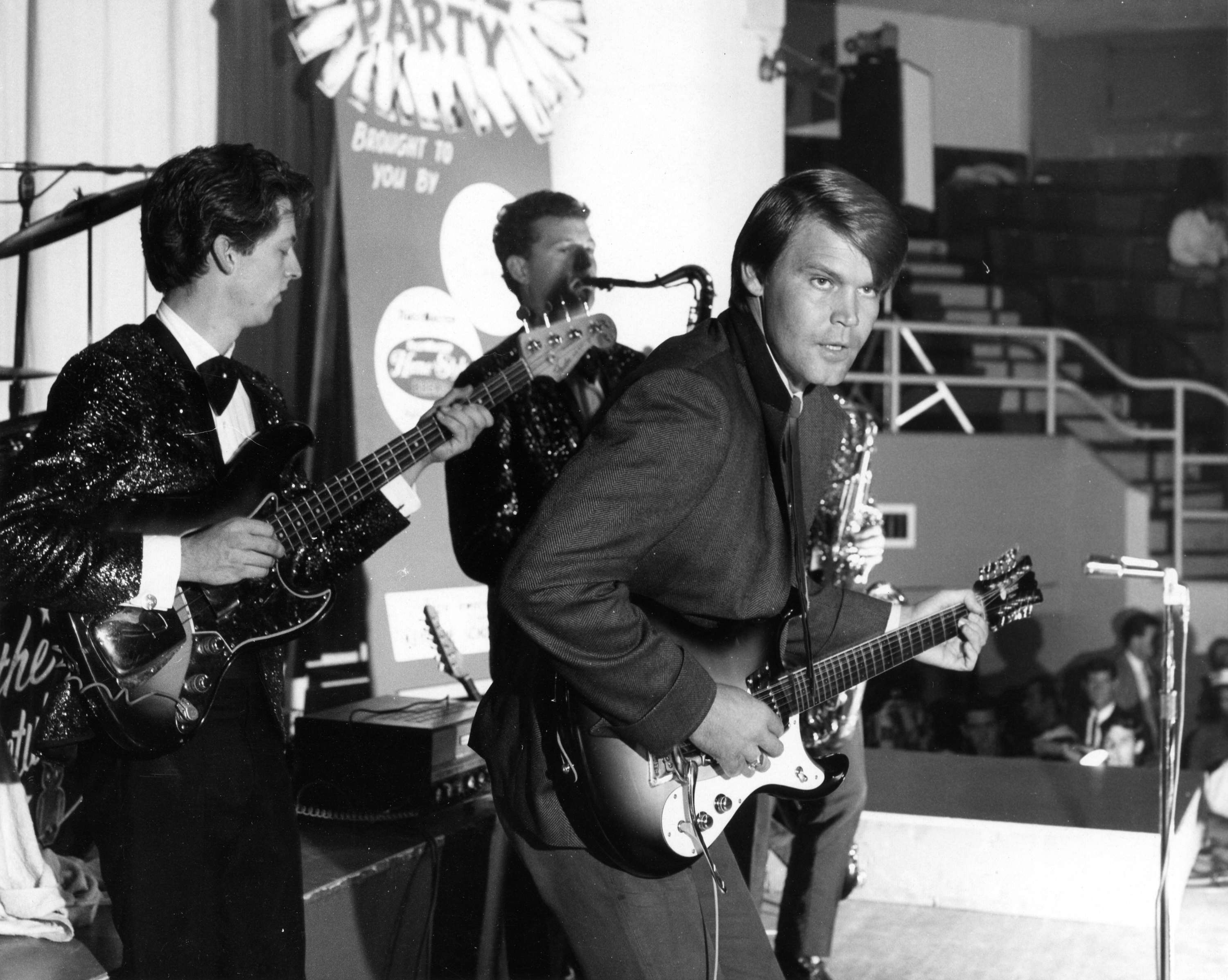 Glen playing the Mosrite 12, dated October 1965. He appears to be playing with the Bossmen, a group from Michigan.


The Bossmen accelerated into the number one Garage Band in the Saginaw, Michigan area, becoming the number one house band at Daniels Den, and getting paid top dollar - $400.00 per show at the Golden Glow Ball Room in Swan Creek Township in 1964. With their fast gaining popularity and string of regional hits - the local media referred to them as the "Michigan Beatles

A whammy on a 12-string... that would be an interesting effect!

I wonder where this guitar is now.

Nokie Edwards liked Mosrite guitars. Nokie was the lead guitarist for the Ventures and by 1963 the whole group had switched from playing Fenders and to playing Mosrites. Being a popular group, Mosrite capitalized on this notoriety and began producing the "Mark" line of guitars labeled “The Ventures Model” on the headstock: 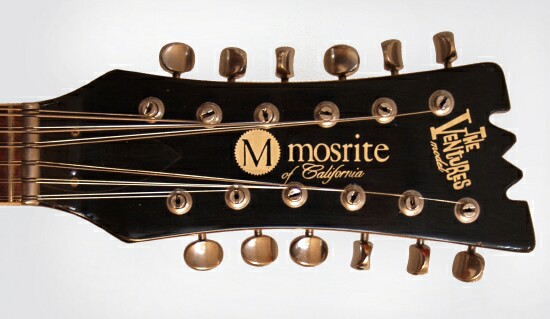 One of these models was a 12 string guitar … the Mark XII. Although most books place first production of the Mark XII in 1966, several examples from 65 are known to exist, aside from the one that Glen used.

We can assume that Glen had a very early Mark XII when he appeared on Shindig, in October of 65, playing his Mark XII, singing Universal Soldier.

Capital used this picture of Glen, in correlation with his release of Universal Soldier. 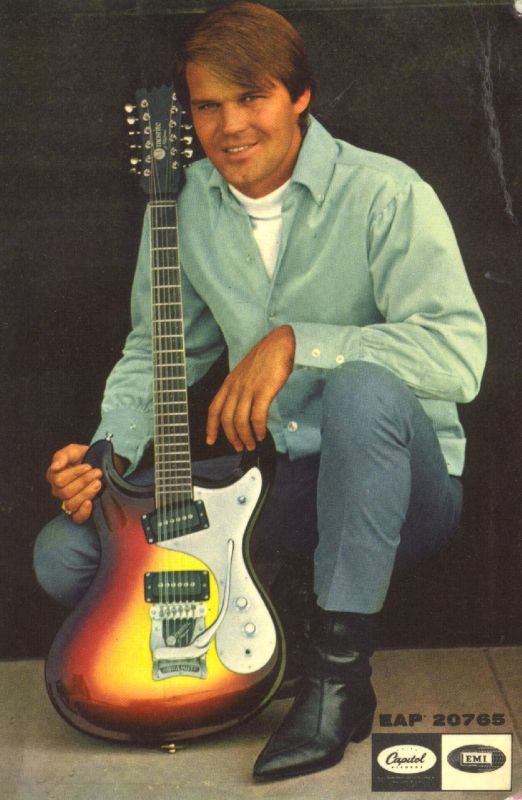 
In early 1967, Glen was photographed playing the Mark XII during an Everly Brothers recording session:

And it appeared with Glen on the Gentle On My Mind Album, which was released in August, 1967. 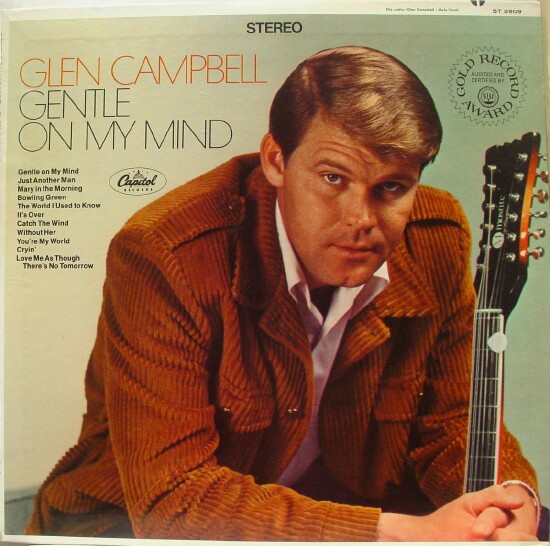 The cover of “The Best of Glen Campbell” provided us with a picture from the “Gentle on My Mind” photo shoot, showing the other end of the Mark XII. 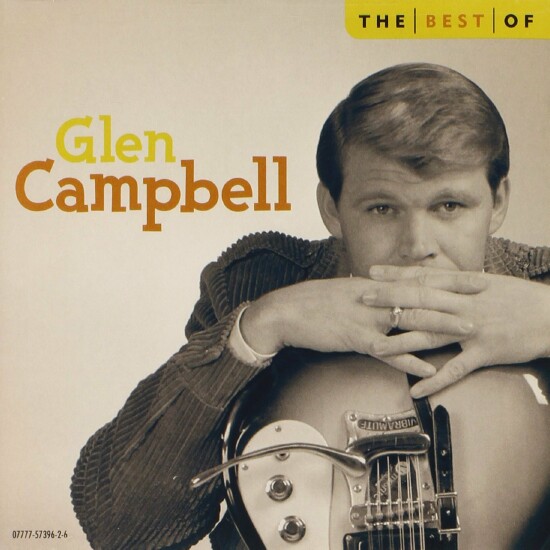 Possibly of interest to some, the tremolo on Glens Mark XII was a Vibramute that Semie had designed and created. No one in the Mosrite community can recall any other 12 string having the Vibramute tremolo, which would lead to some speculation that Semie built this guitar especially for Glen.