Damon Thomas was a little reserved when it comes to telling the full story of the early Mosrite 6/12 he had, named Bobby. Although it has nothing to do with Glen, I would like to share that guitar's very cool story to give some insight into Damon's character, along with some Semie Mosley and Mosrite history.

Damon shared this story a couple of years ago.


The first time I saw "Bobby" it was in pieces, and even though the electronics were not in it, my friend had it strung up. I fell in love with the thing. Great action with that zero fret, and a super fast neck. Eventually, it ended up in my possession.

It sat for more than a decade. The main holdup was that the guitar was missing one of its pickups. I didn't want to put any old pickup in, it would have ruined the look. Eventually, I went to a local vintage guitar store and was given the name of the foremost Mosrite collector in the US, who lived just a few miles away. He dated it to 1963 and pointed out some of the unique and puzzling features.

Fast forward - after years of research (also enter the internet which helped out tremendously!) and trying to find parts and/or someone who I felt was qualified to do the work. I found another Bob, Bob Shade of Hallmark Guitars. [[Bob was responsible for the restoration of Bobby]]

I joined a Mosrite group to share pictures of this very unique piece of American guitar history. Not long after sharing, a gentleman responded by saying his friend had this guitar stolen from him 50 years ago. It was stolen from the Church where he and Semie Moseley were playing a revival.

The guitar was made for Robert McNinch. The guitar was a gift from Bob's father. He bought it directly from Semie for a discounted price as it was going to be dedicated to praise and worship music. The guitar was built in 1962, not in '63 as I had thought (more on this later) as a burst. 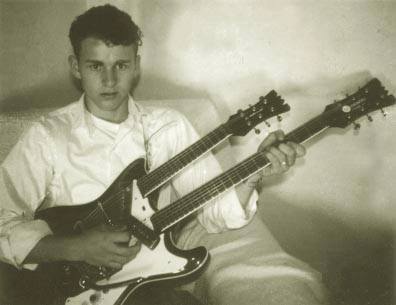 
Not long after, Bob joined brothers Semie and Andy Moseley, and (soon to become master builder) Bill Gruggett, as one of the first 4 employees of Mosrite Guitars. While working in the shop, he enlisted the help of Bill Gruggett and completely redid #003. Of the first 3, this was the only one with the binding around the body. Bob used a drill bit to cut out "Bobby" on the pickguard, put tape on the back, then filled it with glitter and filled it with poly. He did the same to the missing original mistake plate but in the shape of a cross. At the time of the rebuild, they also replaced the pots. This is why I assumed it was built in '63. 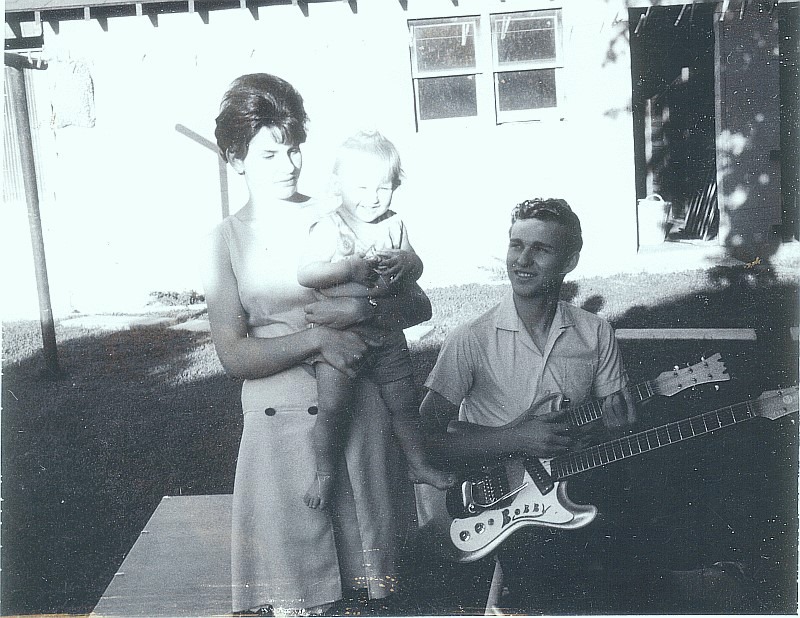 
Bob told me that the great Joe Maphis peeled off $1000 in hundred dollar bills for the guitar so he could give it to Rose Lee, who had fallen in love with it. Even though Joe was a bit intimidating to the teenager, Bob still stuck to his guns and kept telling him "Thank you Mr. Maphis, but it's not for sale at any price."

When it was stolen, it completely ruined Bob and he lost his enthusiasm and eventually decided to make his mark, in the service of our country, as a Marine.

I just boxed it up. There's a big knot in my stomach, but my heart is warm with the thought of Bob seeing his guitar for the first time in 50 years. And he doesn't have to try to fix anything. She plays beautifully. 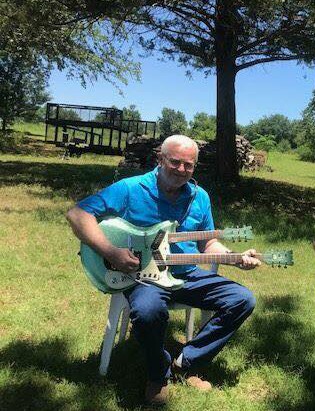 I had one of the very earliest Joe Maphis Doublenecks that would eventually become the production model. I was told there were 3 built originally, here's #2.

Obviously the biggest difference is the top neck, an octave instead of a 12. Set necks, german carve, side jack, mahogany pickup casings, zero fret with spacing cut into the headstock (instead of the metal bar), Vibramute (with the actual mute), etc... 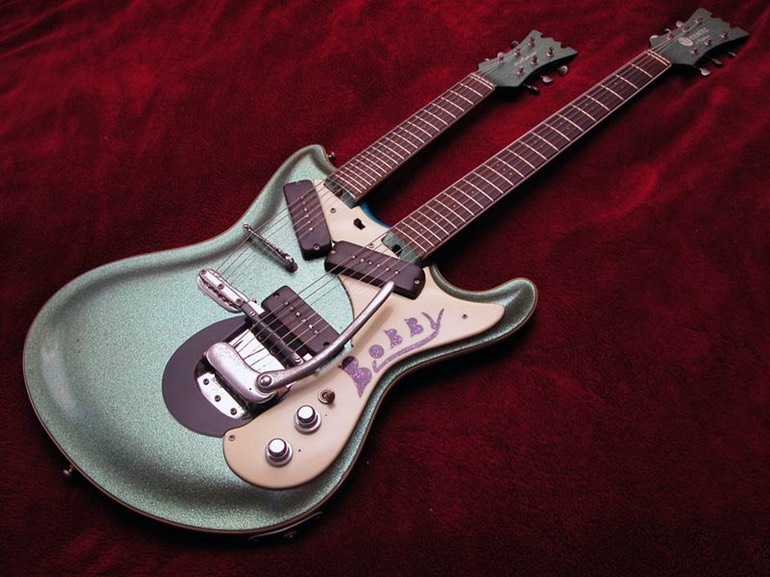 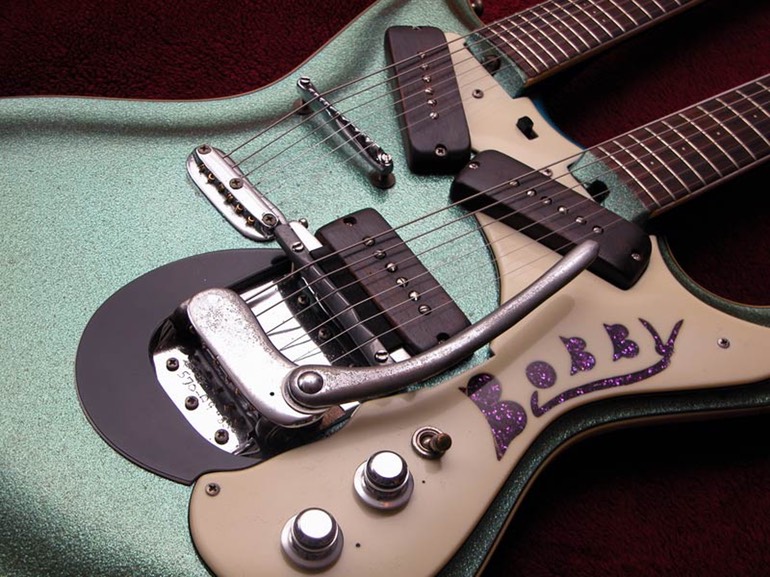 It is interesting to look at several of Glen's guitars to see how he re-positioned his pickups. It suggests, that Glen tinkered with the pickups to customize the sound he wanted. This picture shows a stock Mosrite Mark 1 Double Neck and Glen's. You can clearly see that Semie had shaped the base of the neck to accommodate the pickup's stock position, as seen in the right-hand photo. 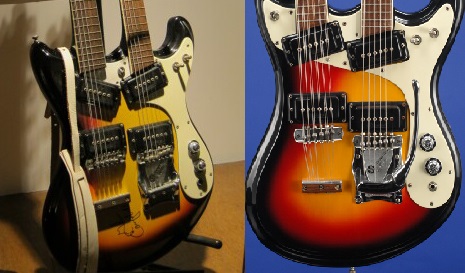 
But then you have this earlier 6/12 where the neck has accommodated Glen's positioning of the pickup. Maybe Glen had played one of these before Semie made his and he replicated the pickup placement? 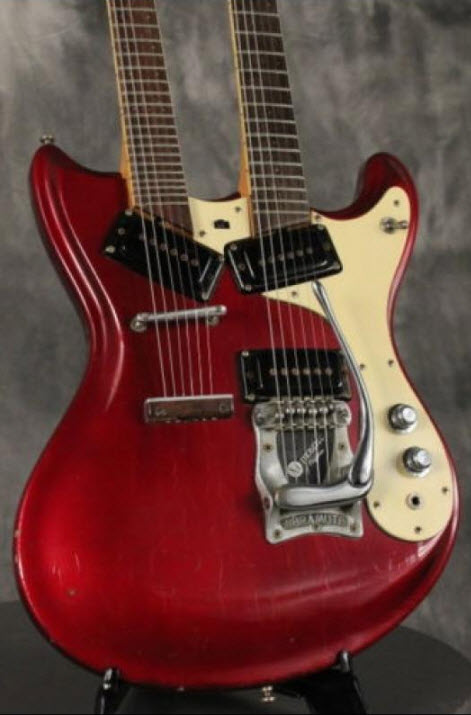 That one could use a little dusting but never the less, it is awesome to see.

Thanks for doing all of this!

In 1955, Semie Moseley, an unabashed Joe Maphis fan, built Joe a double neck electric with one standard-sized neck and another in a shorter scale that enabled Joe to play mandolin-like passages. This led to Semie making Joe a 6 over 12 string guitar soon after. Both of these were known as the Joe Maphis Models. Around 1963, Semie signed a distribution agreement with the Ventures for an exclusive Mosrite Ventures Model line. One of the longtime moderators on the Mosrite forum states “Semie made plenty of double necks up until 1963, because he was still making everything by hand on a custom order basis. After he went into business with the Ventures, everything was so crazy that there were basically no more double necks until 1966”

At some point, Glen ended up with a Mosrite Ventures Model, double neck guitar. This guitar is almost identical to the Joe Maphis model produced prior to the Ventures pact. I think there is a chance that the Ventures may have given this guitar to Glen. In the book, "Walk Don’t Run – The Story of the Ventures”, Don Wilson states “When Glen showed up at the studio, he played on five or six songs. He named his contribution Cookout Freakout on Lookout Mountain, but he didn’t play lead on anything. I think Bob and I gave him a Mosrite guitar.” Guitar Freakout was released in Feb of 67…so there is a possibility that the Ventures gave him the double neck (which was one of their models that they distributed), in 66, when they recorded the album.

Glen’s Mosrite double neck is currently on display at the Musicians Hall of Fame and Museum, in Nashville, Tennessee. Joe Chambers, the owner and CEO of the HOF Museum, was nice enough to take the time to share some stories about Glen's exhibit there. Mr. Chambers stated that he purchased the double neck Mosrite from a Sherriff Howlett, who was in office in the county where True Grit was being filmed. He stated Sheriff Howlett became friends with Glen and John Wayne while they were filming in Colorado. Mr Chambers stated that Glen befriended the Sheriff and sent him quite a few personal items, that are also currently on display at the Musicians Hall of Fame.

Mr. Chambers shared that the double neck was sent to the Sheriff on a greyhound bus with the shipping label on the guitar case and no box. He stated that when he received the guitar and case at the HOF, the guitar case still had the original shipping sticker on it. Thanks to Dee for these pictures of Glens Mosrite double neck at the Musicians HOF.

To my knowledge, there is only one video clip of Glen with the double neck. That is a privately owned clip, where Glen appeared on “Dancetime” in 1966 with the double neck Mosrite. This screenshot was taken from that appearance and it clearly shows that Glen has apparently covered up “The Ventures Model” at the top of both heads (Many thanks to Kevin Lemons for this picture): 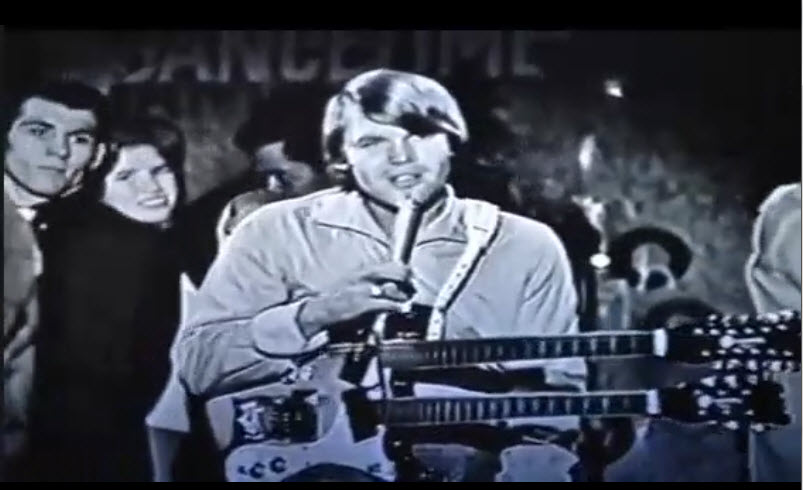 This picture may not be republished, copied nor redistributed w/o the expressed written consent of Kevin Lemons
Dancetime 1966.jpg (53.16 KiB) Viewed 4833 times

Here is a picture of the 6/12 headstocks

taken at the Musicians HOF. Joe Chambers states “ The necks are dated Nov and Dec 1965. The Ventures name was covered with a piece of black plastic, like picks are made of. Looks like a professional job to me. They were glued over the Ventures name. One popped off is how I know”