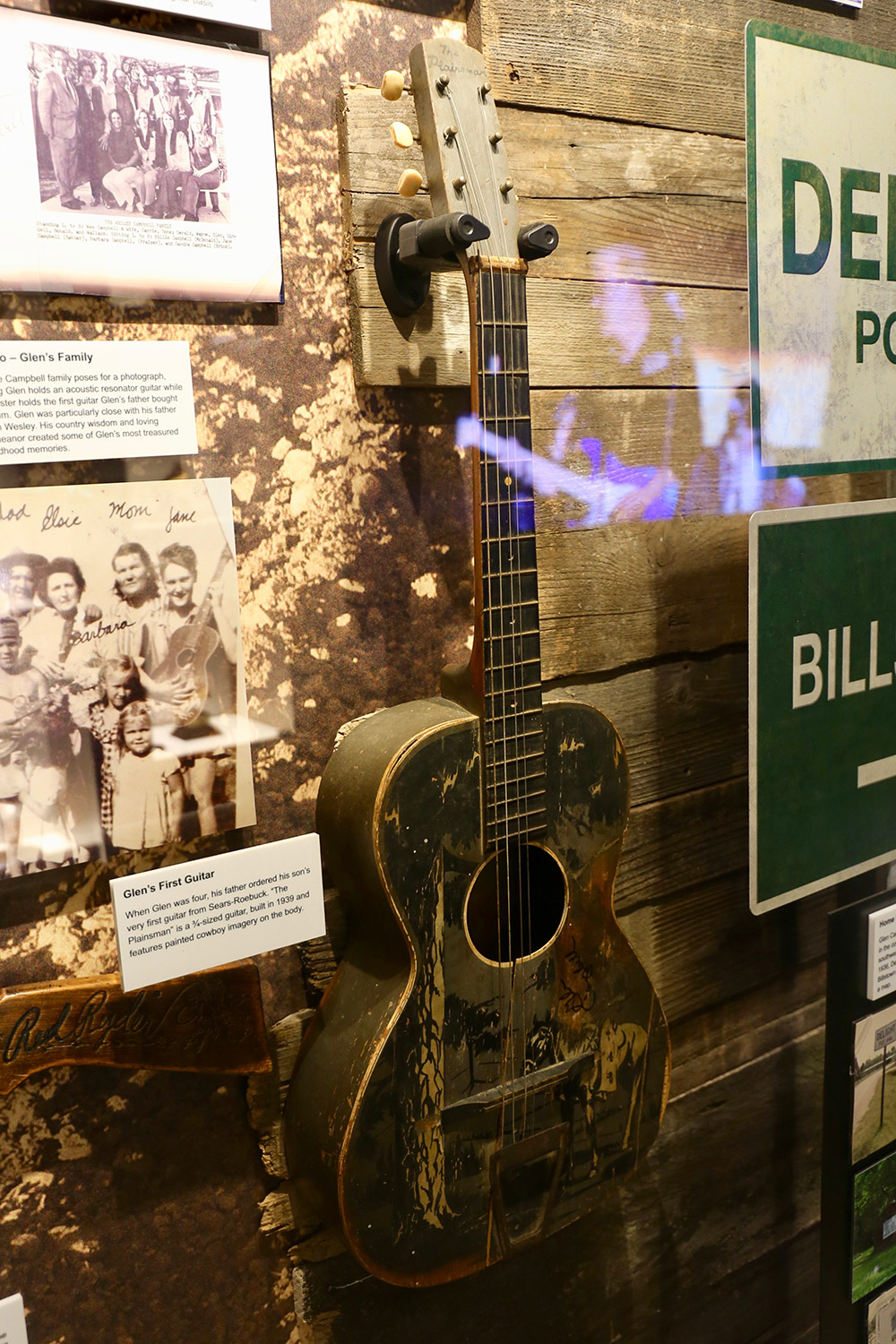 
Many thanks to the Glen Campbell Museum for allowing this guitar to be featured at their museum and on their Facebook Page.

If you have any questions, you can contact them at

The Richter Manufacturing Company was the manufacturer of "The Plainsman" guitar.

The Richter Mfg. Co. was founded at Chicago, IL by Carl H. Richter in 1926 to market instruments under the Sweetheart brand name. Richter also made Buckeye Brand Guitars. The company vanished around 1944.

Instruments made by Richter include parlor and classical guitars. Richter also made cowboy guitars with brands "The Plainsman" featuring a scene from a Gary Cooper movie (1936) of the same title. "The Plainsman" was sold by Montgomery Ward 1938-1943.
[Source: Cowboy Guitars, By Steve Evans, Ron Middlebrook, Roy Rogers]

Built for the big Montgomery Ward catalog and department store chain by Richter of Chicago, The Plainsman initially came in a gunmetal grey, with the stenciled scene in black and white. Towards the end of 1939 the design changed to this fabulous bronze enamel lacquer, with the scene depicted in cream and two shades of brown. The following year the guitar reverted to its original color scheme, along with a different tailpiece. In 1941, alongside the gunmetal version, the guitar also came in blonde with the Plainsman scene in black and brown. Later that year the gunmetal was gone, with the blonde version closing out the production run, just prior to the calendar turning over into 1942.
[ Source: Just Guitars Austrailia] 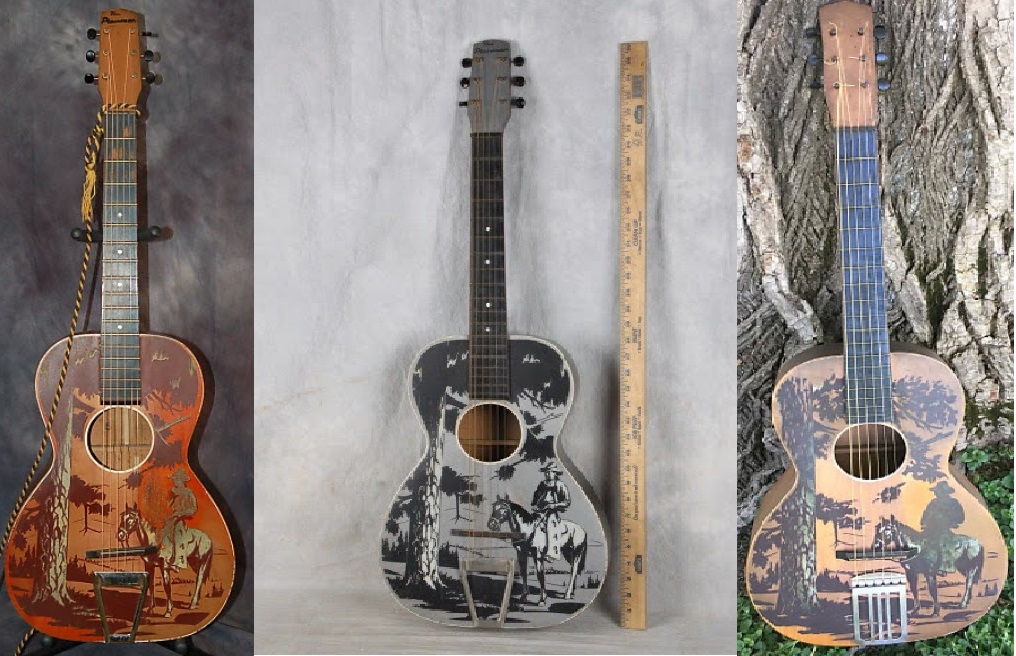 Many thanks to a GC fan for unearthing this excellent picture of Glen's first guitar! 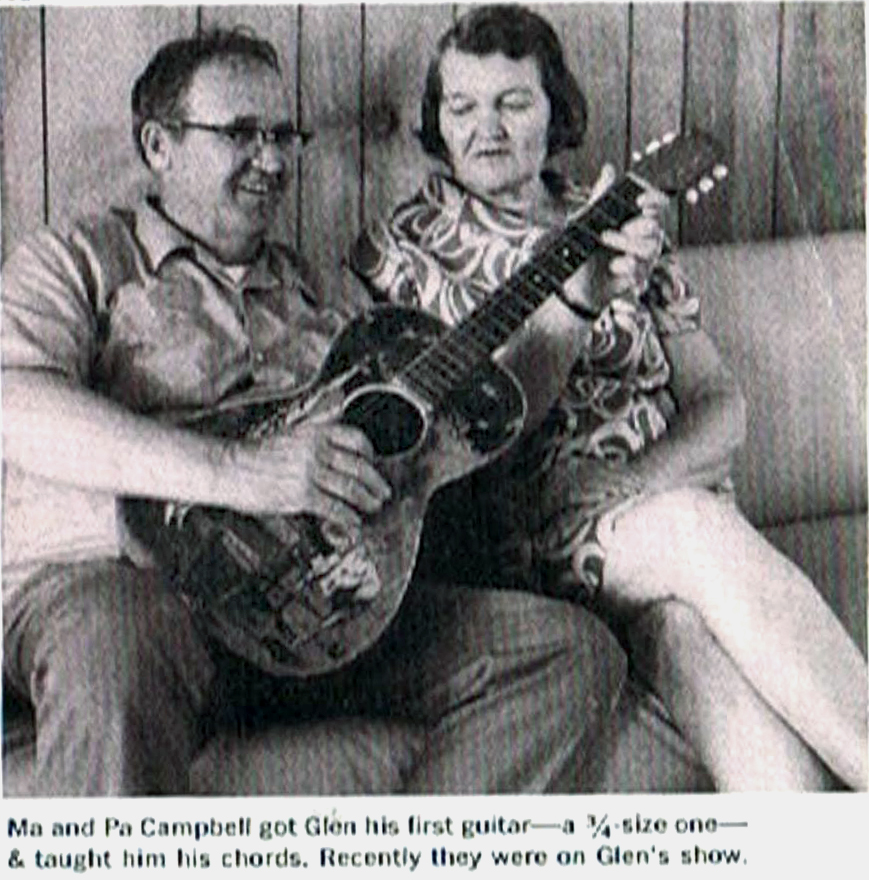 A tremendous amount of gratitude goes to Randy Holmes for solving the mystery of the model of Glen's first guitar!

and you can look through his website; Silvertone World for vintage Silvertone musical instruments.

With Randy's assistance, it is pretty evident that Glen's first guitar was a:

One of the most famous of all the Singing Cowboy models, The Plainsman was in production from 1938-42. The Plainsman model was named after the big budget Paramount western of 1936, starring Gary Cooper. The Plainsman was built for the Montgomery Ward catalog by Richter of Chicago. The Plainsman initially came in a gunmetal gray, with the stenciled scene in black and white. Towards the end of 1939 the design changed to this fabulous bronze enamel lacquer, with the scene depicted in cream and two shades of brown. The following year the guitar reverted to its original color scheme, along with a different tailpiece. In 1941, alongside the gunmetal version, the guitar also came in blonde with the Plainsman scene in black and brown.

Randy was kind enough to put together these pictures showing how Glen's guitar matches up with the Montgomery Ward guitar:

It is hard to argue with the above picture. It certainly appears that Glen's first guitar was "The Plainsman" and most likely bought through Montgomery Wards.

To attempt to determine what Glen’s first guitar was, one has to look at historical testimony and media content. Luckily there are several references to this guitar that are available.

In the 1969 edition of TV Radio Mirror Magazine, in a story called “Glen Campbell, His Live Story!”, Glen’s dad recalls:

“Glen got his first guitar when he was about 4. I ordered it from Sears and Roebuck. Glen was so little, his fingers wouldn’t go around the neck and reach the middle strings, so I bought him a three quarter size (guitar), that he could reach around.”

“When he was four, his dad sent off to Sears, Roebuck for a three-quarter size guitar”

Andrew Dansby, Entertainment writer with the Houston Chronicle, wrote from a 2008 interview, in an article dated 9/18/11:

“Campbell distinguished himself by embodying the restless push and pull between city and country. Raised in a small Arkansas town, he learned on a $7 Sears and Roebuck guitar with a corncob capo fashioned by his father."

Biography produced a video documentary on Glen, in which they presented:

This information about Glens first guitar

In the BBC documentary “Glen Campbell: The Rhinestone Cowboy”, Glen shares with the viewers:

This story about his first guitar

Finally, in an interview with Gerald Campbell, Glen’s brother, relates:

This story about Glen's first guitar


As early as 1905, Sears, Roebuck & Company was selling musical instruments and the Harmony Company was Sears main supplier. In 1916, Harmony was bought by Sears, continuing to make instruments for Sears and other customers. In 1940, Sears sold the Harmony brand to an investment group and adopted the Silvertone brand name for all musical instruments. After 1940, Sears continued to buy guitars Harmony and sell them in their catalog.

"Cowboy Guitars” were very popular in the U.S. in the 30’s and 40’s with the advent of Roy Rogers and Gene Autry. These were the times when kids dreamed of being a cowboy. Sears & Roebuck, as well as many other mail order outlets, offered several “Cowboy Guitars”. These guitars were smaller and inexpensive, making them a perfect beginner’s guitar. The majority of these guitars were made by the Harmony Company, coming with cowboy themed stencil painted art on the soundboard. There were probably 20-30 popular Cowboy guitar stencils that were put on the guitars, being produced by Harmony, and sold by the different mail order outlets.

By all accounts, Glen got his first guitar around 1941, when he was around four to five years old. By most accounts, this guitar came from Sears. Luckily there are references from the Sears and Robuck catalog from those years, on the Cowboy guitar’s they sold. 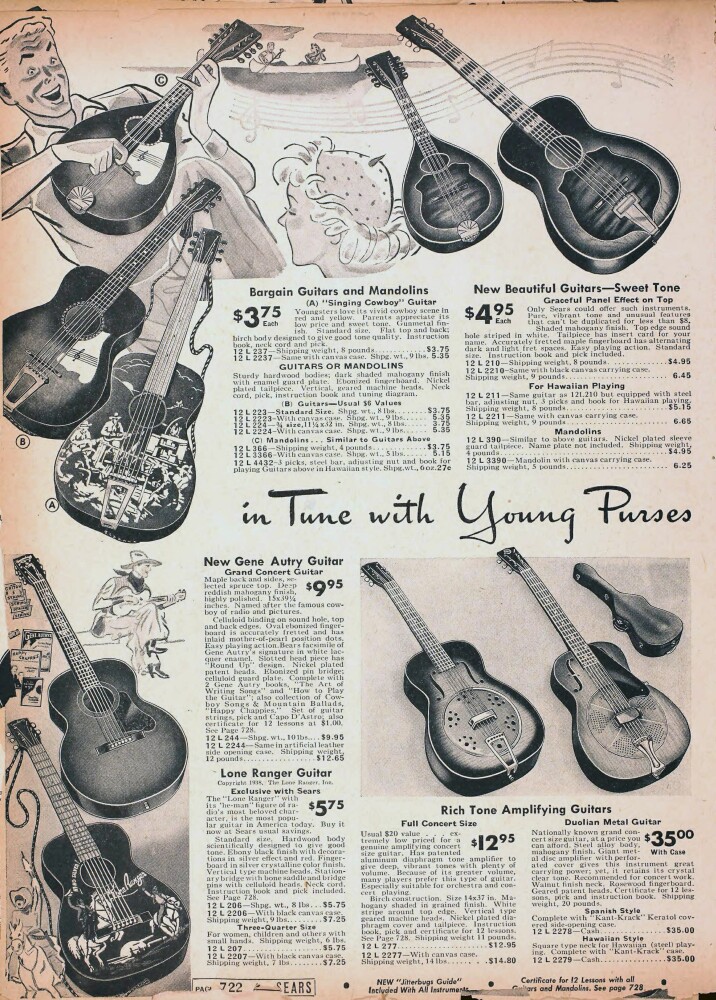 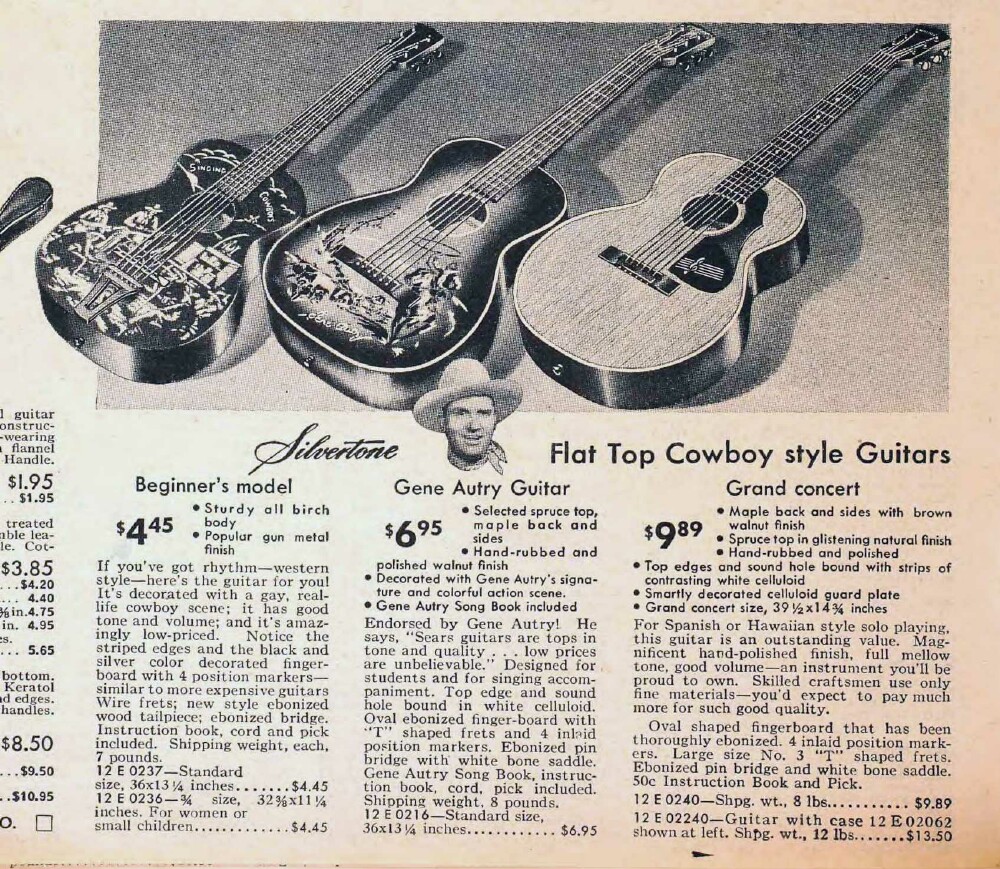 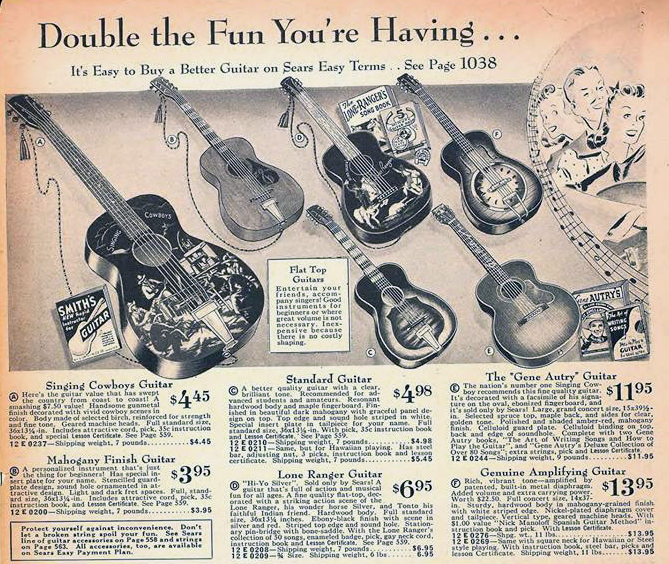 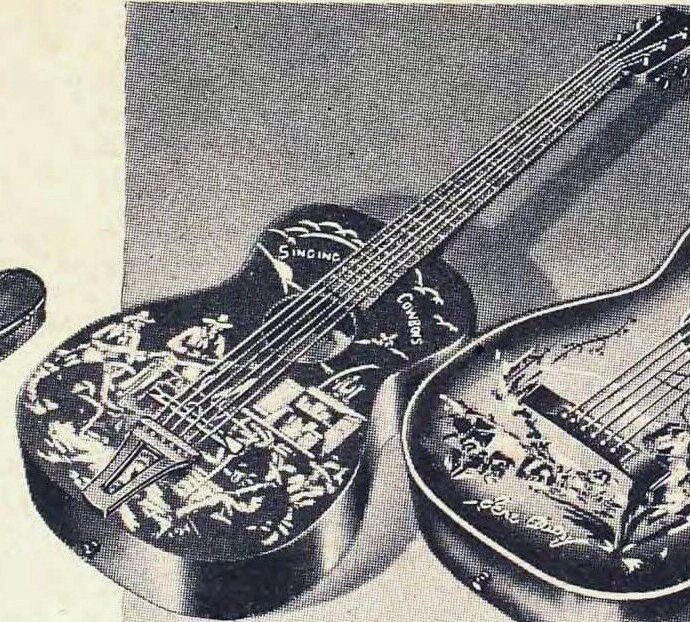 There are pictures of Glen and (what I feel is) his first guitar. It appears that in some of the pictures, the decal has worn off…but the tail piece seems to be the same in all the pictures. 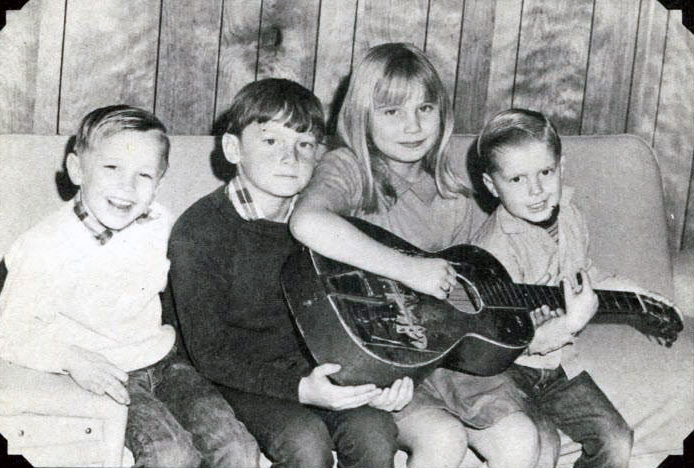 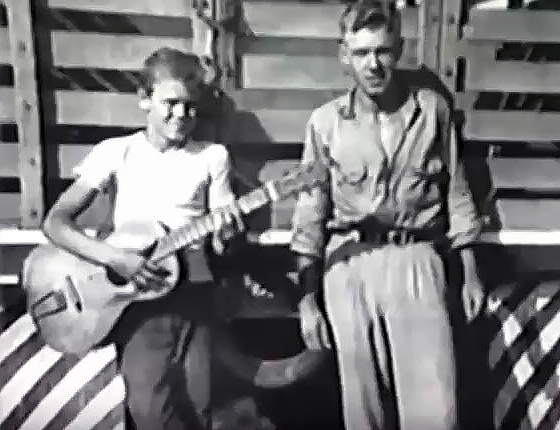 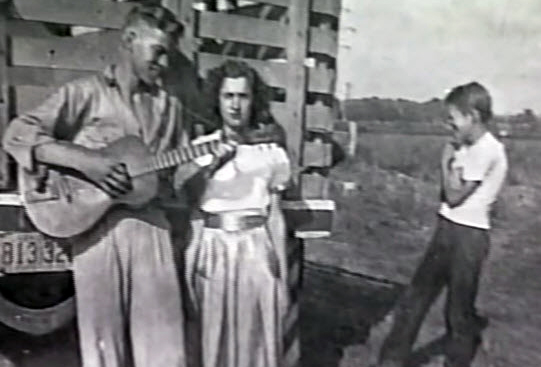 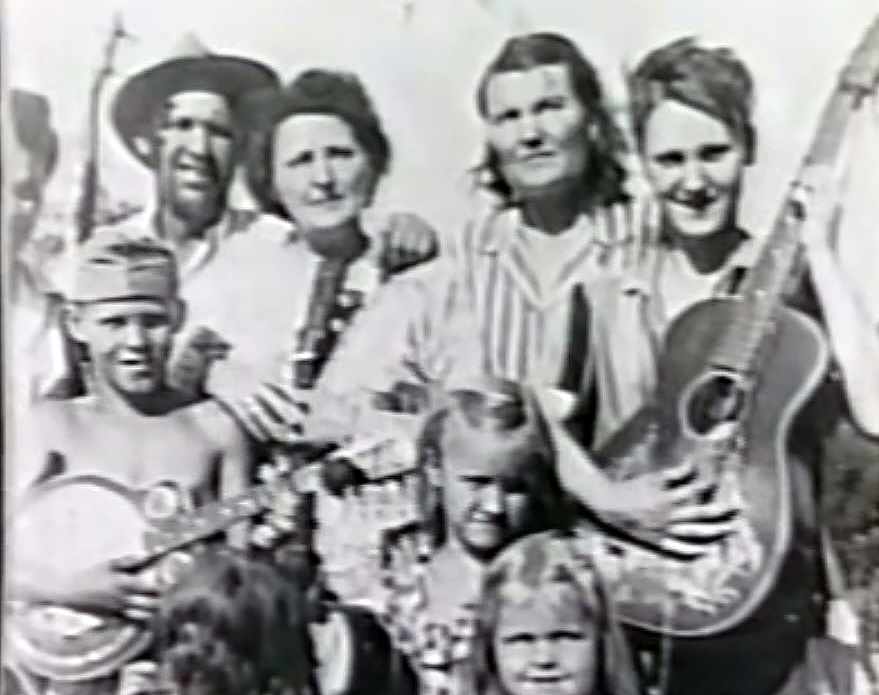 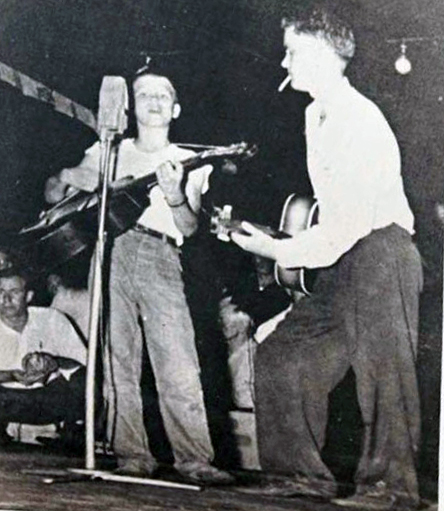 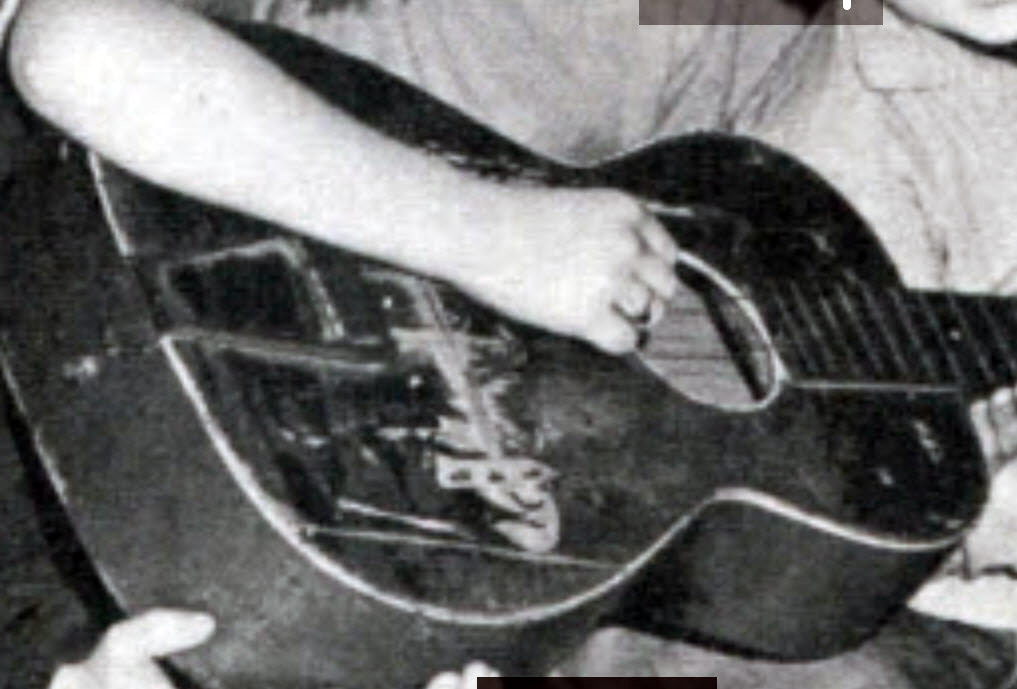 Can I definitely say that Glen’s guitar is a certain “Cowboy Guitar” from the Sears Catalog from that period? No. The lack of a clear picture and various incongruent descriptions make it difficult.

But, it certainly seems that Glen's first guitar was a Cowboy Guitar and that his dad bought it for him around 1941. It certainly would have been through a mail order company and no other company is recalled, other than Sears and Roebuck. But, it appears that if you tell a story long enough, it becomes historical...but not factual.