A music scene investigation is resolved by Glen Campbell Forums On The Net.
Background:
Writing for The Second Disc, Joe Marchese had published a review of Glen Campbell's 2016 release of "A Matter Of Time: Glen Campbell’s Atlantic Years Anthologized By Varese".
This release included a previously unreleased song, "For The Good Times," with an unknown duet partner on Track #10 with Glen. Varese had not disclosed the unknown singer in their liner notes.
Glen Campbell Discographer Cowpoke (Michel) assisted The Second Disc by identifying the unknown singer, someone very close to Glen. Joe posted Michel's research answer on The Second Disc's website for all fans to read.

This is just one example of how Glen Campbell Forums and its members assist the media with research and our sessionography resources. Many of these research projects are initiated "behind the scenes" in responses to media posts, private messages, and emails to our Forums' mail messenger.

Below are the flow of three posts on The Second Disc's media sites about identifying the unknown singer, the research gathered by Michel, and The Second Disc's acknowledgement of this new information to media and fans, a courtesy much appreciated by us.

[You may need to mouse click on each image once in order to view the full image. Or scroll.] 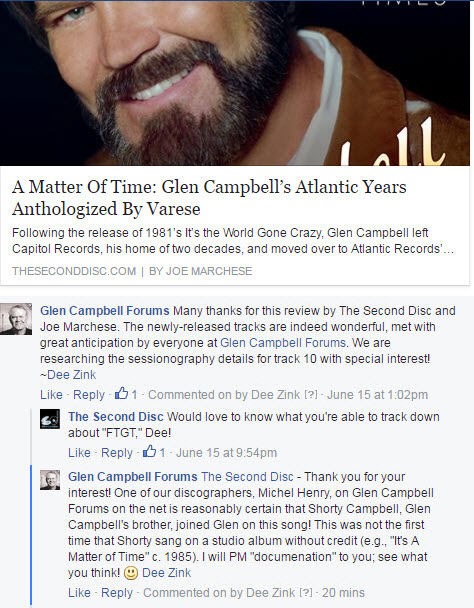 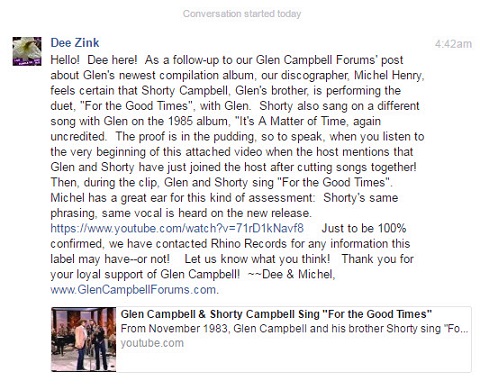 Return to “Glen Campbell Forums in the Media”