The power and therapeutic benefits of music on Alzheimer's patients is undeniable....

Read the back story here about "The Songaminute Man" and his son: http://tinyurl.com/gtk739n" onclick="window.open(this.href);return false;

Could there be a more inspirational project than Glen Campbell's own final studio album, "Ghost On The Canvas", released in mid-2011?
From the archives of Glen Campbell Forums is an article written by music therapist Rachelle Norman for her blog for Kansas City elders and caregivers, Soundscape Music Therapy, dated November 7, 2011:

Just a few months ago, the world learned that long-time country star Glen Campbell has received a probable diagnosis of Alzheimer’s disease. Campbell is currently on his farewell tour, and he released his final album, “Ghost On The Canvas” at the end of August. This album includes several songs he co-wrote with the album’s producer, Julian Raymond, as well as songs written for him by Jakob Dylan, Paul Westerberg and Robert Pollard. When I heard about this album, I knew I wanted to listen to it. Glen Campbell is already popular among many of the folks I see for music therapy, and I thought it would be fascinating to hear the artistic work of a person who has been diagnosed with dementia – a person who is nearing the end of his career and facing a daunting disease process. “Ghost on the Canvas” did not disappoint.

Through these songs, Campbell sings messages that could be helpful for listeners who are in the early stages of dementia as well as listeners who are caregivers. The song “In My Arms” repeats the line, “keep it on the recent. Keep it on the now,” which is certainly good advice for people fearing what is to come from a disease process. In “Strong,” Campbell sings a message to which I imagine many people with dementia and caregivers could relate.... 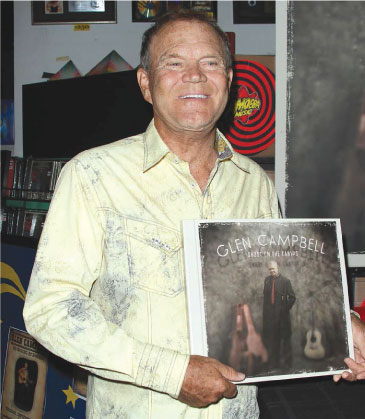 The two beautiful paintings that Glen Campbell created during an art therapy session in September 2012 (scroll down to read background info and watch a video of Glen painting these artworks) are now available in poster format from Coral Canyon Publishing in California! Each poster is 24" x 18" and is available for $60 (USD) plus shipping. Posters will begin shipping next week. The picture below shows both the giclees and the posters.

If you are interested in learning more about these posters (e.g., whether or not international shipping is available) or would like to purchase one, please send me a private message. I will reply with Coral Canyon's contact information. Glen Campbell Forums does not profit from the sale of these posters. 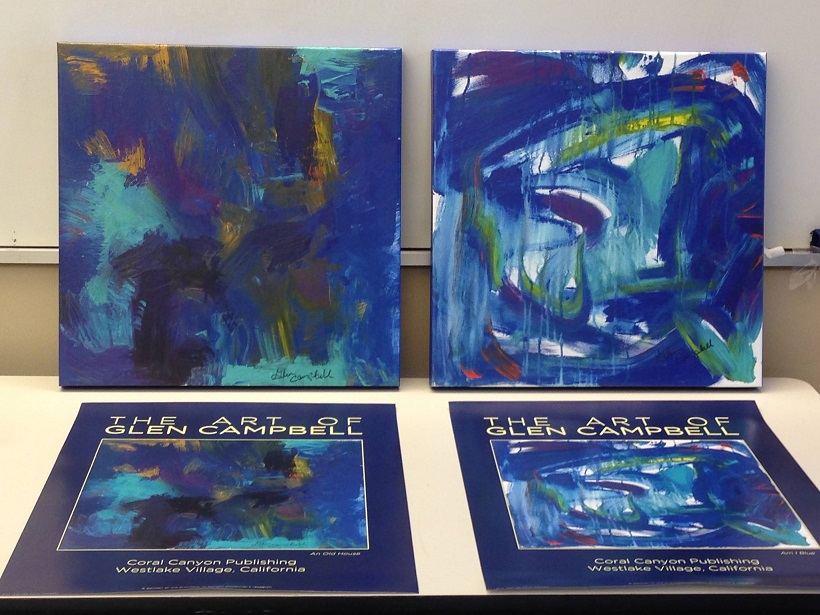 Please see related posts below including this video from Glen's art therapy session in 2012, during which he created the two paintings shown on the new posters:
https://www.dropbox.com/s/eaymexmc5kl3w ... h.mov?dl=0" onclick="window.open(this.href);return false;

More info to follow about how to order a poster. (Glen Campbell Forums does not profit from these sales.) 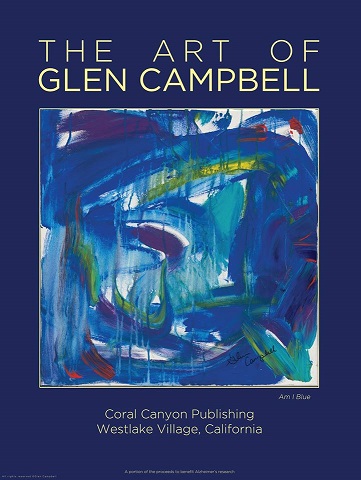 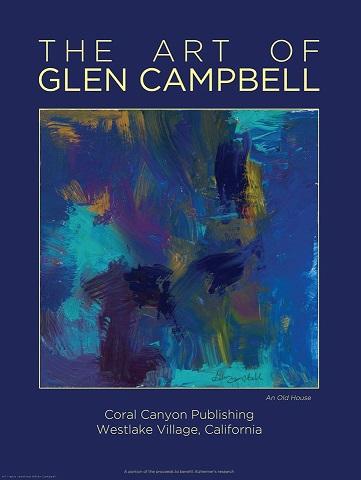 (If you would like more information about purchasing the giclees created from Glen Campbell's paintings, please PM me for contact info.) 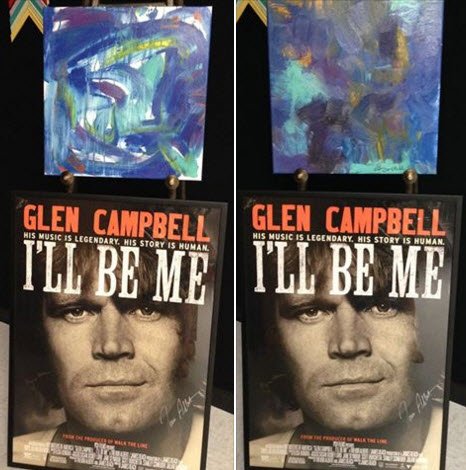 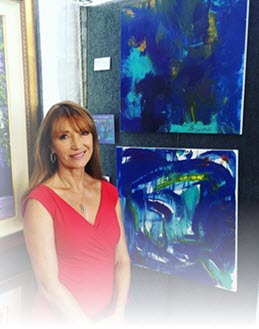 This is a follow-up to the post below about "The Art of Glen Campbell" and Glen's paintings that he created on September 27, 2012.

Giclees of Glen's art work are now available for purchase from Coral Canyon Publishing to help Glen and his family and Alzheimer’s research by raising awareness with his two beautiful works of art.

What an artful way to support Alz's awareness! Thank you, Glen Campbell and family and friends!

You may privately message "The Art of Glen Campbell" on Facebook for more information: https://www.facebook.com/glencampbellart" onclick="window.open(this.href);return false;.

Here's another great photo of Glen (with friend, Jane Seymour) at his painting session! 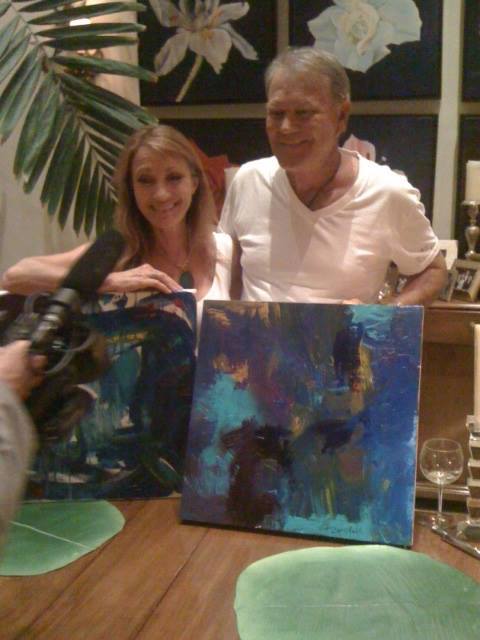 That's a great idea, Mike!
I wouldn't have thought about turning the "house" painting for a different look.
A "two-for-one"!
Dee

Just my opinion but I like the Old house picture best and can I also say that I think if it was turned 90 degrees clockwise I think it would look like a scene of a house by a lake in a valley. That is just how I see it of course. Both are very vivid I think.

As a follow-up to "The Art of Glen Campbell" video--link posted below--reproductions of Glen Campbell's first ever paintings will be available in various media for purchase in the future to help raise funds for Alzheimer's. 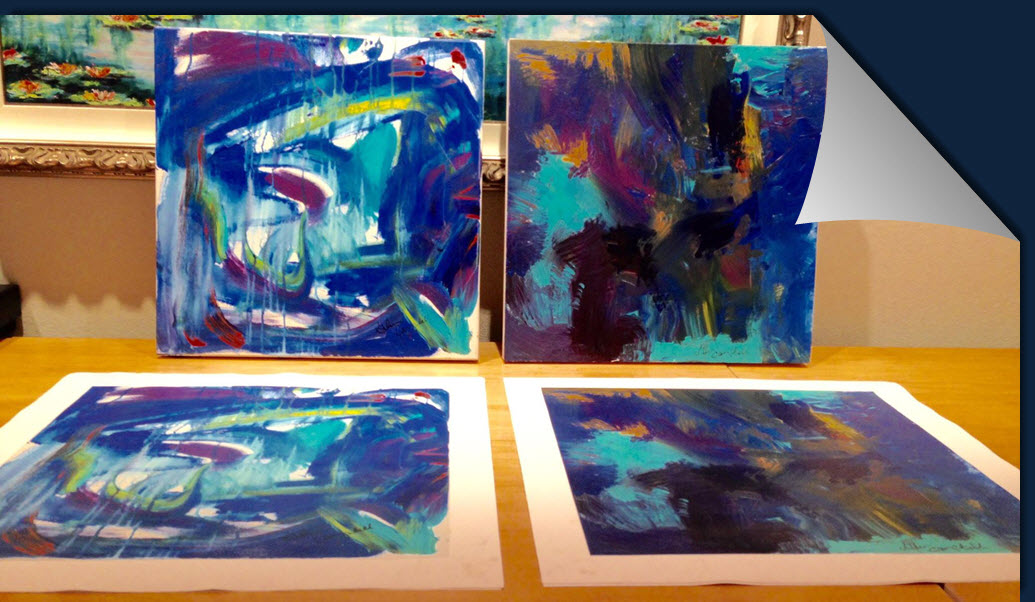 "The impact of music on Alzheimer’s patients was dramatically showcased in the new Glen Campbell biography, “I’ll Be Me,” which chronicles the progression of his Alzheimer’s over the past several years. Over the course of the film Campbell becomes less able to remember the lyrics of his songs in concert, yet his guitar playing remains razor-sharp in concert."

The full report is available at:
http://www.newsmax.com/Health/Brain-Hea ... id/672362/" onclick="window.open(this.href);return false;

The AARP article mentioned in this report ("The Healing Power of Music") can be viewed online at:
http://member.aarp.org/health/brain-hea ... imers.html" onclick="window.open(this.href);return false;

Return to “Living the Legacy”