Art therapy...Glen picks up the brush!
Enjoy this inspiring video, "Glen Paints", created in 2012 and posted on a new Facebook page, "The Art of Glen Campbell", sanctioned by Glen Campbell (Official) on Facebook.

For information about art therapy for people with Alzheimer’s disease and other forms of dementia, check out this article:

How Art Therapy Enhances the Quality of Life for Dementia Patients
alzheimer's.net
April 29, 2014

One powerful way to aid those with Alzheimer’s disease and other chronic illnesses of aging is through music. A familiar tune has the power to move our souls, lift our spirits and help us recollect good times with friends and family. Just how powerful an effect does music have on these listeners?

Short but poignant blog written by someone who is battling another brain disorder, dementia (the May 19, 2015 entry).

When he [Glen] is playing before a audience, it is hard to think of him having Alzheimer's.
The same with me when I get on a roll speaking about dementia. It is during the downtime that you realize we are losing the battle and parts of our passion.

Ashley Bryan is a local entrepreneur who has developed a high tech multi platform health technology that assists families with loved ones who have Alzheimer's disease. Ms. Bryan recently stopped by the 90.1 studio to talk with WFYI’s Jill Ditmire about the business and the documentary.

Article and video about a new technology platform with resources to help families who are having to manage chronic illness, with a focus first on Alzheimer's disease.
Site will feature video clips that did not appear in "I'll Be Me", Glen's documentary.

“...families all over the place can learn from the experience the Campbells had — which is an incredibly brave thing for the Campbell family to do.” 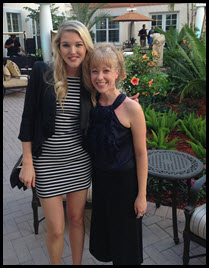 Art therapy is the catalyst to provide the voice and the memories of those who have lost their ability to articulate their life stories, their emotions and thought processes. At a recent screening of Glen Campbell’s documentary, I’ll Be Me, a panel of professionals led by Angel Duncan MA-MFT, ATR, answered questions about Alzheimer’s disease and the benefits of expressive art therapies. Angel Duncan was able to meet with the Campbell family who shared how Glen has been able to benefit from engaging in art therapy.

This project helps people who suffer from a wide range of cognitive and physical challenges to find renewed meaning and connection in their lives through the gift of personalized music.

Klutinis’s movie comes as Alzheimer’s becomes more prevalent in an aging society and depictions of its impact are appearing more frequently in popular culture.

"I'll Be Me", Glen's documentary film
"Still Alice", fictionalized film based on a true story
An episode of “House of Cards”
Episodes of “Mad Men,” “The Sopranos,” “Grey’s Anatomy” and other television shows
“Slow Dancing With a Stranger”, a non-fiction book by Meryl Comer


It (Alzheimer's disease) is definitely bleeding much more significantly into the media,” said George Vradenburg, a founder of the D.C.-based nonprofit US Against Alzheimer’s. “It used to be the case that you hid out, you wanted to sort of stay private, you didn’t want to talk about your disease. But now more and more people are willing to talk about their disease. And more and more people are telling stories of others, fictional and real, of people experiencing this disease. So we’re beginning to see a crack in the stigma as people begin to talk about this disease.”

Return to “Living the Legacy”