I have attempted to properly ID each member. If I have erred, please contact me to let me know. 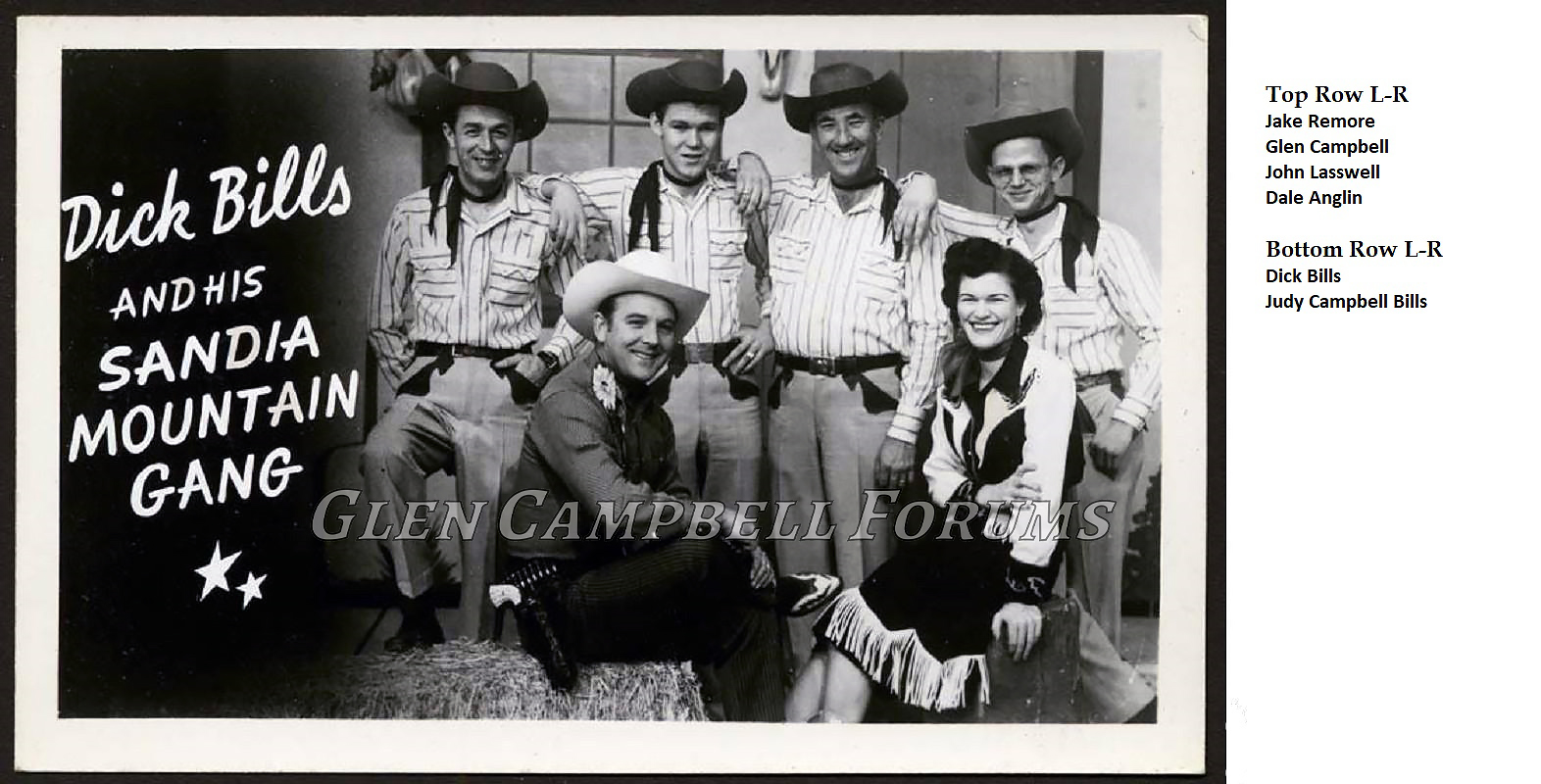 I have attempted to properly ID each member. If I have erred, please contact me to let me know. Colorization of this picture was provided by "We the People Restoration & Colorization" 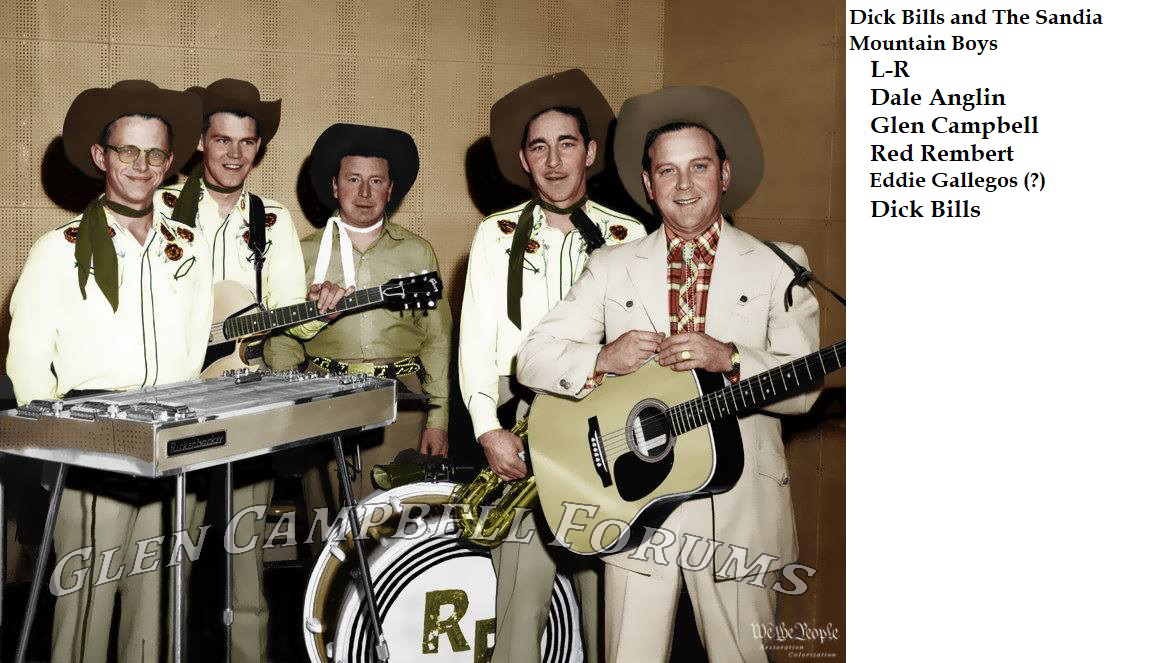 It is about time you showed up

. Thank you for the post and hopefully, you will keep us updated. You have been a valuable and tremendous resource for Glen's time in New Mexico. I sincerely admire your expertise and diligence in helping us recreate Glen's early days in Albuquerque.

As you well know...all one can do is hope that the name given a person, in a picture, is accurate. You run with that until, by chance (usually), the correct name comes out. In these days of the internet...that may be too late because the wrong name has been propagated so many times with that picture. I know you work tirelessly on this kind of thing, so please drop back in to continue to set the record straight. We really appreciate you.

I wanted to point out that Jake Raymore is not in the photo you posted of Dick Bills and the Sandia Mountain Boys. While Jake did play with Dick on the KOB show, he was a drummer. We are trying to identify the sax player in your photo.
His grandson identified Jake as being on the far left in this photo:

Bringing this popular topic back up to the top of the All Things Glen forum again.
Also, we will have updates (lots of photos) to add to this topic soon.

No actually he's one with the hat.

Great picture Cowpoke. I haven't seen that one before. Is Glen the one wearing the hat ?

Fantastic "colorized" photo of Dick Bills and His Sandia Mountain Boys, including a young Glen.

Arlw thanks so much for your information. Please say thank you to your Dallas DJ from me too!

I actually found out about this single in 2009 and posted about it on the old forum early 2010 (see: https://web.archive.org/web/20100211171 ... 1264948892" onclick="window.open(this.href);return false;). But the other day I found that link and decided to post it again because a lot of people might have never heard about it. Also in 2009 I corresponded with a music researcher called Al Turner who wrote a complete article about the 4Star OP (stands for Other People) custom series in American Music Magazine (Nr. 86, December 2000) of which I have a copy. It contains a complete discography with dating based on either BMI copyright registration dates and / or Billboard Magazine review dates if available. The single that was released just before Dick Bills' single, A Mansion Without Love (OP-314) / I Married Another (To Forget You) (OP-315) by Ernie Oleachea & His Blue Mountain Boys (OP-196) has a BMI registration date of June 26, 1954. That is where the date of 1954 comes from. The OP-series started around 1950 and continued until 1961. So some of those records were probably 78s but later ones where no doubt 45s. I will see if I can contact Al Turner again to ask him.

Now as to the question if Glen is playing guitar on "Beggars Can't Be Choosers", there is no way to say for sure. But, in my humble opinion, 1954 does fit the timeline perfectly. Glen I think started with Dick Bills in either 1953 or 1954. (I will share the timeline of Glen's early career I have been working on for the last few years in another post). Then the question becomes... does the solo guitar SOUND like Glen? Well in the end that's up to everyone individually. My old penpal, the late Richard Price, who researched Glen's music for most of this adult life, put it like this:


I went back and listened to both tracks again. I do think it could be Glen on "Beggars." The "noodling around" during the verses does sound like him. Oddly enough, the solo part in the bridge doesn't sound like him to my ears.

So that seems a nice conclusion to me: a definite maybe.

But I am very curious to hear what all the other members think about it! Do you think it's Glen or not?

Here's that link again (it appears that I posted the wrong link earlier in this topic, sorry!):

Another reply from my DJ friend and quite interesting--wanted to pass this onto all of you about Dick Bills:


Because the record has the matrix code OP- that’s a clue that it was a 4-Star Records custom press, something an individual had the 4-Star plant out in California press up for them. If you can find other indie records that have adjacent numbers, you might be able to get closer to a date. (A real date for those that want it).

There is a site where you can search labels - perhaps looking for little labels from California, looking at the label pix and seeing if there is an OP- code on the record.
That’s the in-the-trenches research I do from time to time.

As you can see, this record by Jimmy & Duane is from June of 1955, and bears the number OP-356 That’s after yours so I would guess that the 78 is earlier that year or perhaps 1954.
The record is not posted but this is his email once again. I thanked him for his help--I know him 40 plus years!