The Hitching Post in Albuquerque, NM Where Glen Campbell Played

Re: The Hitching Post in Albuquerque, NM Where Glen Campbell Played

Hi KMFrye54, yes I have come across that story several times. I agree, things must have been already unrepairable by that point. In one of the tv documentaries done about Glen, he said that one of the last arguments they had went along the lines of "are you going to release that stupid cowboy song as a single? Then you have really lost it". Of course this story vindicates Glen, because Rhinestone Coywboy became his big comeback, which might have been a reason for him to remember it. So, I think it's not unlikely something like this was said by Billy Jean, but I don't think it was the reason they broke up.

Re: The Hitching Post in Albuquerque, NM Where Glen Campbell Played

This may be a bit of a de-rail,, but as it involves Billie-Jean, it might also be the place where someone can clearup a possibly apocryphal story that has bothered me for several years.

I've heard it said that, many years after Albequerque, after the Goodtime Hour was done and dusted, and "Rhinestone Cowboy" came along, that song became the thing that finally ended Glen & Billie's marriage. One item I've see attributed to Glen himself went along the lines of "she told me that if I recorded Rhinestone Cowboy, she'd leave me. I did, and she did!" or words very close to that.

Obviously, it true, things were already unwell in the Campbell household, but still- to draw that line in the sand over a song?

Has anyone else come across anything which resembles that?

The Hitching Post in Albuquerque, NM Where Glen Campbell Played

It is unusual if you read an article about Glen's time in Albuquerque without The Hitching Post being mentioned. Some say it was Glen's home base, he was seen there so often. Early on, it was with Dick Bills, his uncle, and the Sandia Mountain Boys and in 1958 with Glen's own band, the Western Wranglers. It was a typical bar and restaurant that catered to the working class of Albuquerque. As with most honky-tonk bars in the '50s, it was a pretty rough crowd.

“They should have had ‘Fightin’ And Dancin’ Nightly’ advertised outside some of those clubs. I was playing at a place called the Hitching Post, and some of the guys I worked with in the daytime, they would come out and dance. Some cowboy would smart off to them, and they would jump right in. I would take my guitar and hide it. Protect it. If a flying bottle hit it, man, you couldn’t replace it. I never thought of shielding myself, the first thing I thought of was, get the guitar out of the way”

The first nightclub to be at 4501 West Central, was the El Patio Club. It was actually on Hwy 66 (later Route 66) and was outside of Albuquerque city limits. This ad came from a May '48 edition of the Albuquerque Journal. 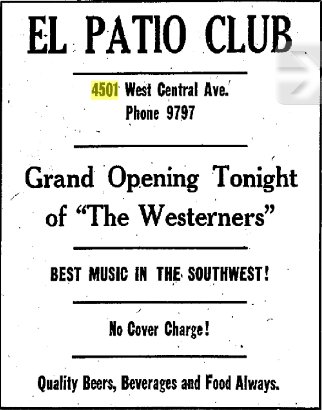 The First Hitching Post
The original Hitching Post was opened on October 26th, 1949 at 4501 NW Central. Dick Bills and his Sandia Mountain Boys provided the entertainment, along with Glen's aunt, Miss Judy Campbell.


Glen's uncle, Dick Bills, was the house band for the club. The club was located by the Rio Grande river. This is what the outside of the club looked like: 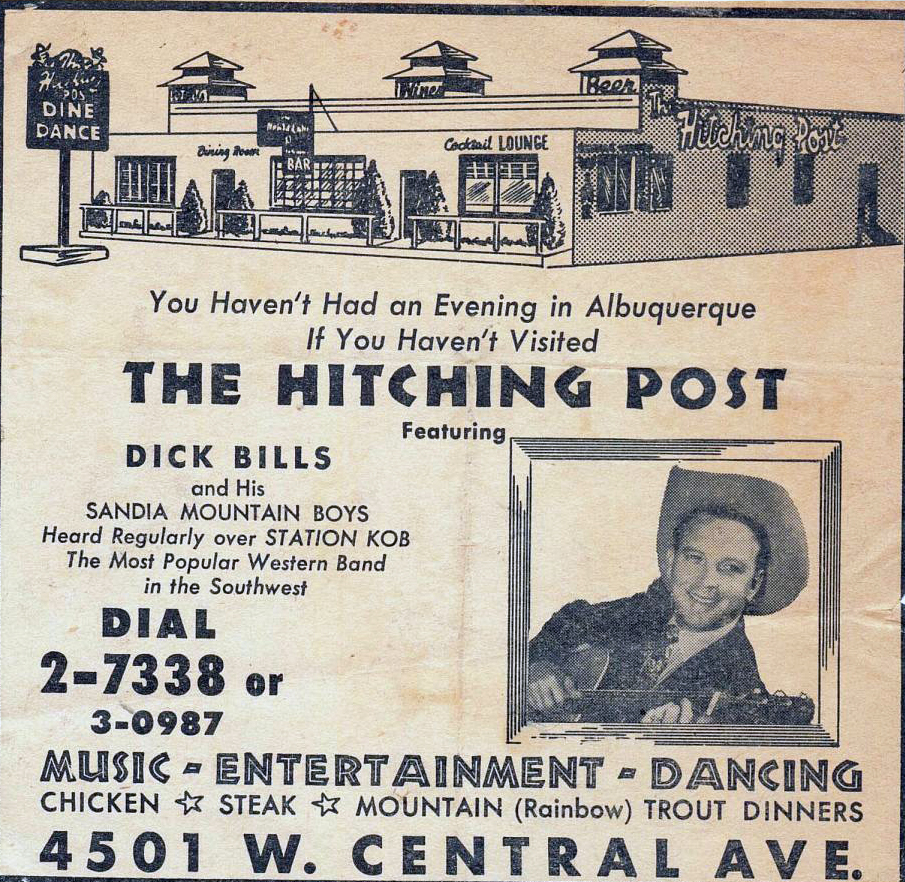 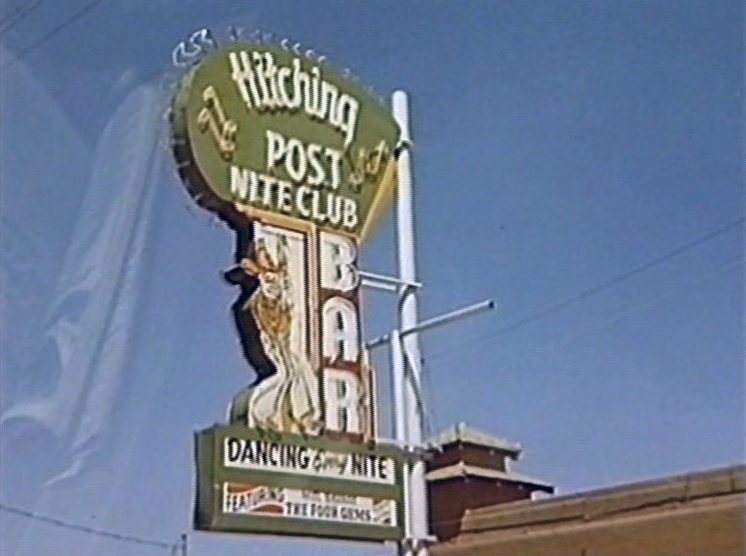 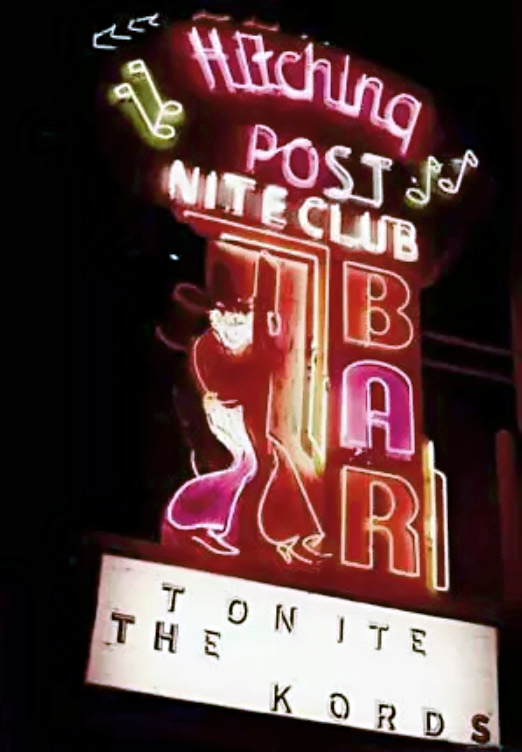 The Hitching Post Moves
It appears from this ad that the Hitching Post moved to 6401 Central SW for a short period of time. All ads for this location begin and end from January to March, in 1953. All ads indicate that "Al Vaughn and the Vagabonds" was the clubs C&W entertainment. 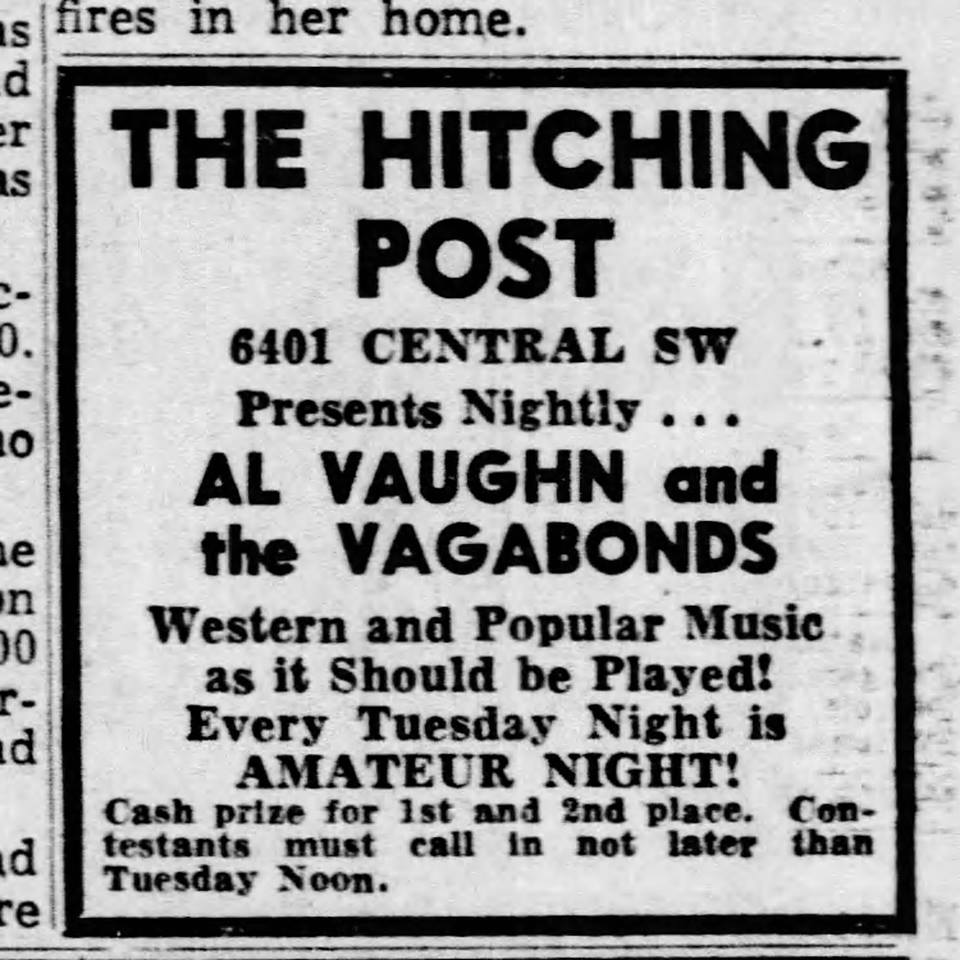 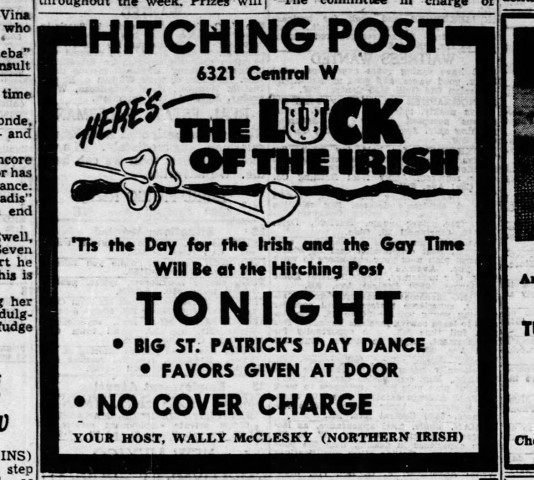 
It appears that around the first of August, 1959, Glen appeared at the Hitching Post with his own band. Glen left for fame and fortune in California about a year later. 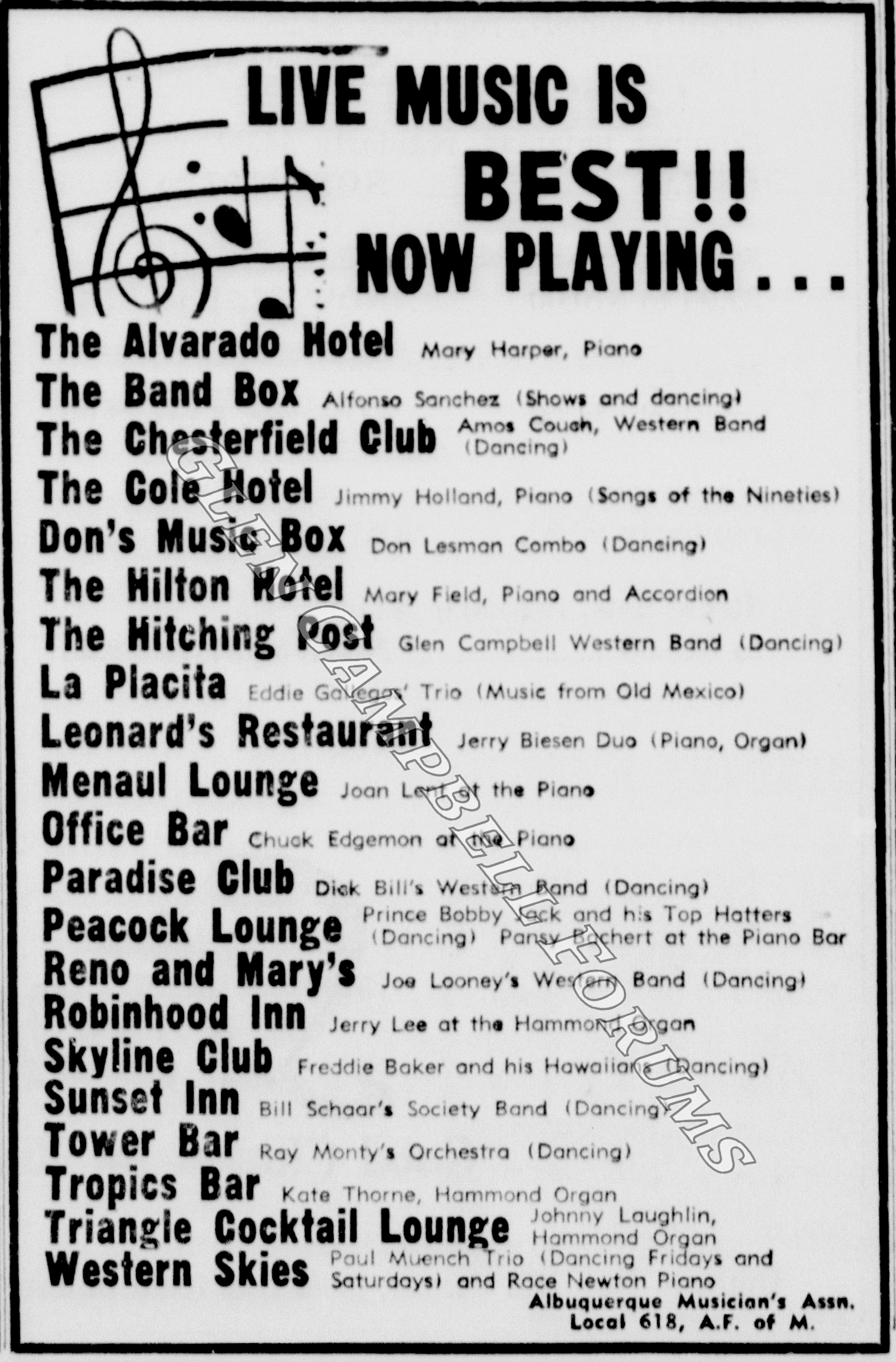 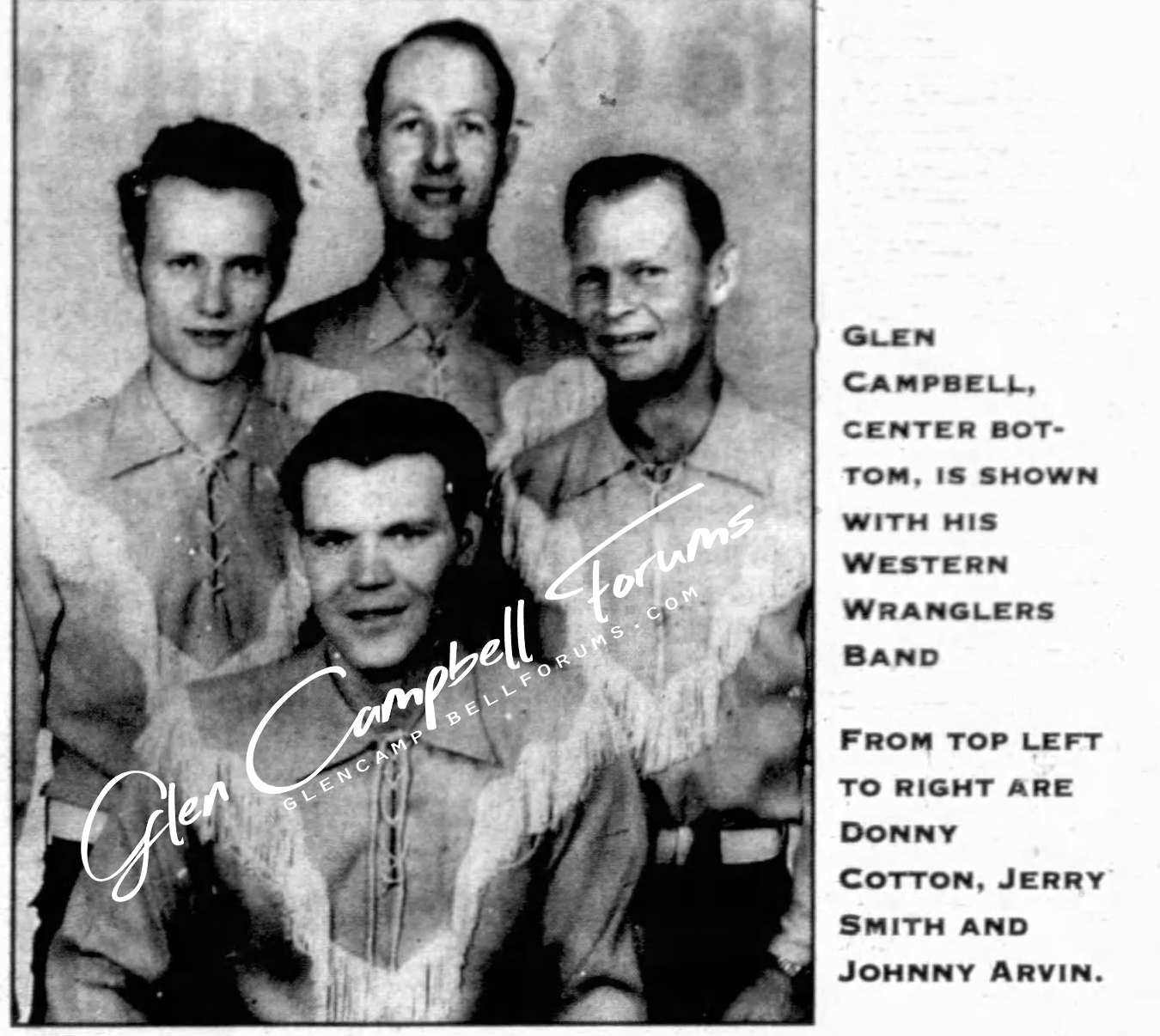 
It is said that Glen met his second wife, Billie Jean Nunley, at the Hitching Post. Glen stated in an interview with the St. Louis Post Dispatch on 2-8-70

"Billie had finished high school and come out to Albuquerque where she lived with her sister and worked as a beautician. She'd come into the Hitching Post, where I was playing. We began talking and just seemed to hit it off right from the start."

Sometime during the summer of 1975, the Hitching Post became "all new" but at the same location. 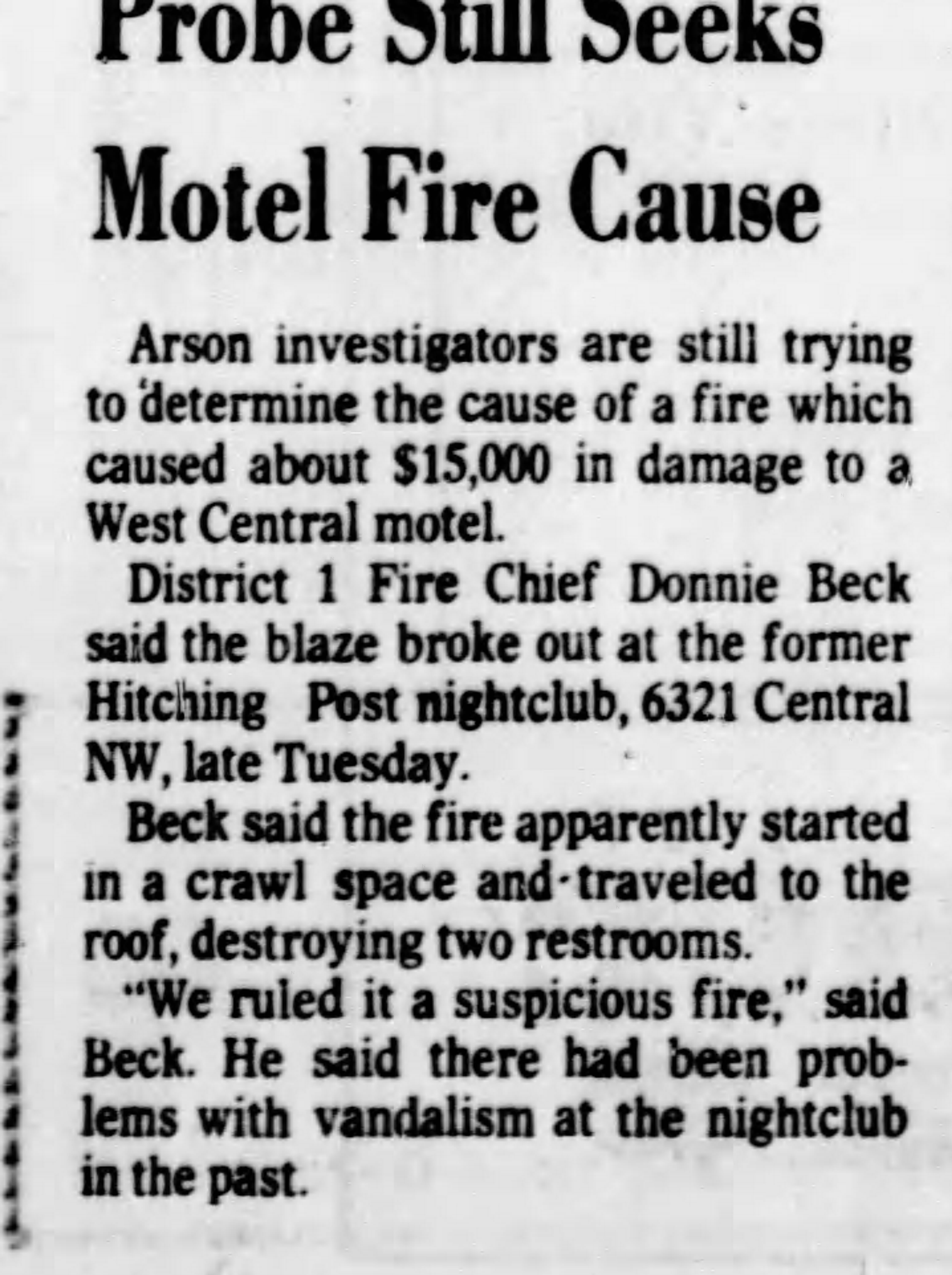 From the Albuquerque Journal in November 1984: 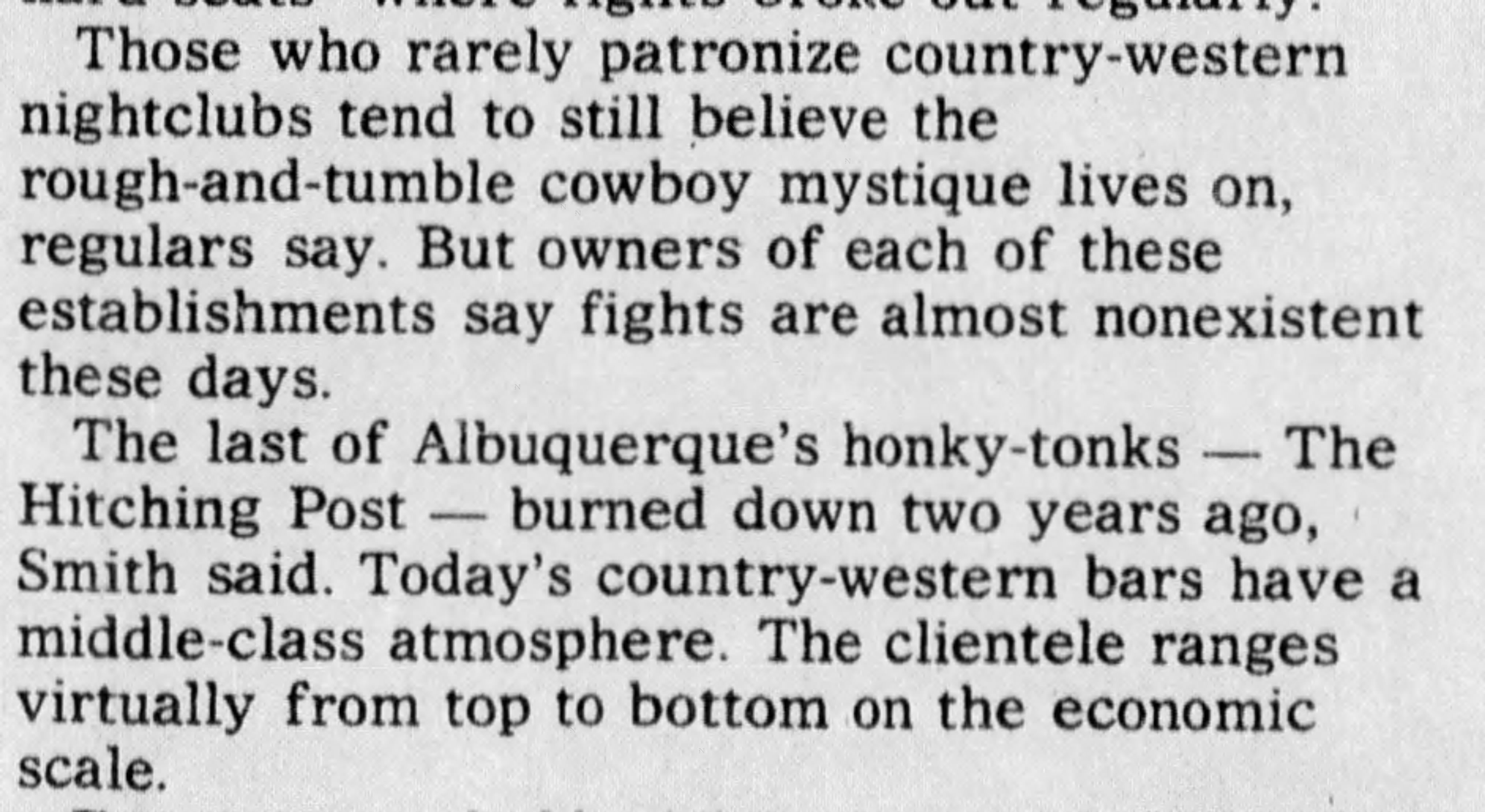 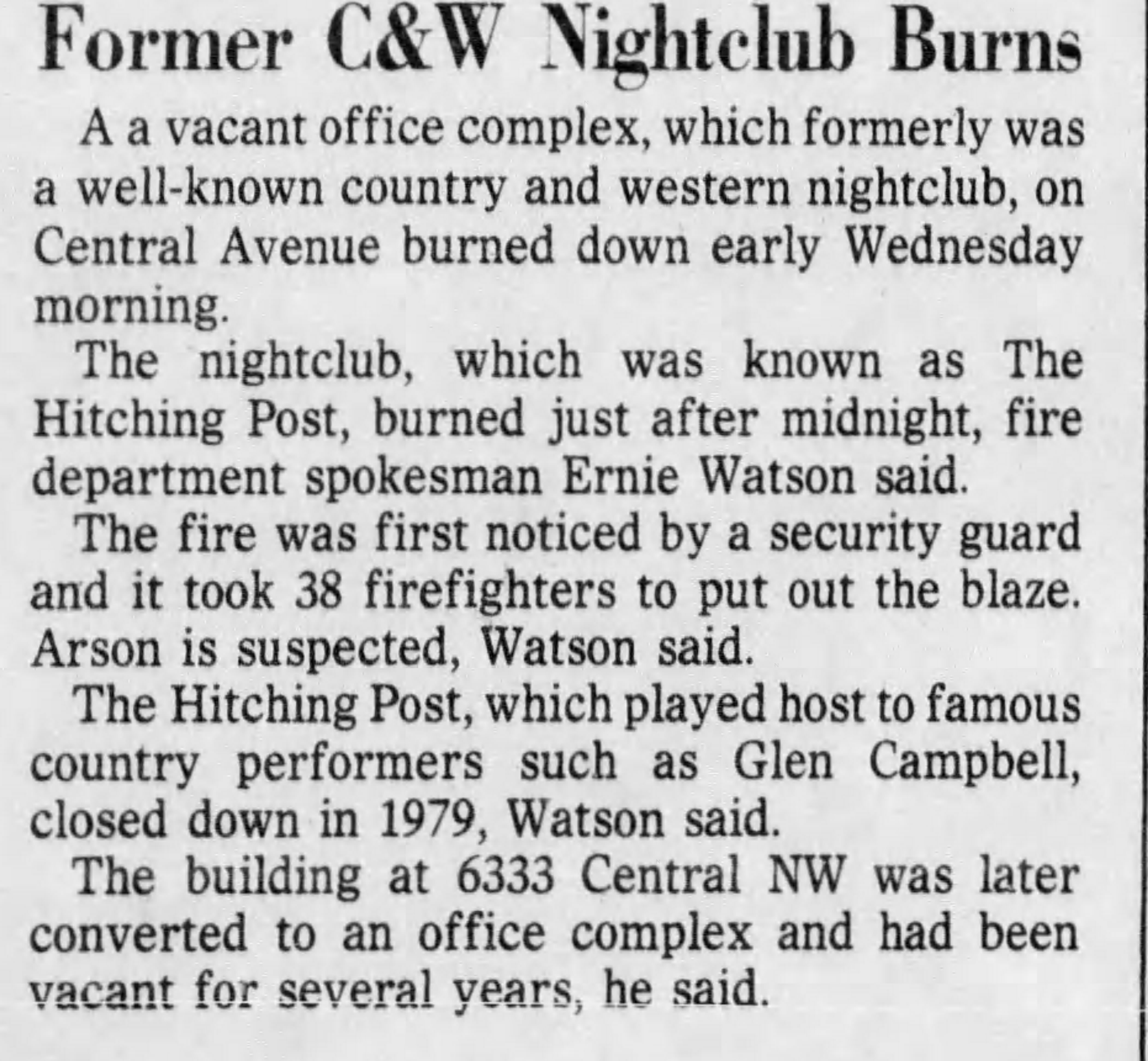 
Mary Van Dyke is to be given a lot of credit for the information contained in this post. She owns and operates Finding Grandpa, a genealogical research service. She is a pro at producing a tremendous amount of information that Google misses. Thank you Mary!