The Bluebird 12 String that went back to the Ovation factory originally had the fancier neck. That neck was crushed by an airline on a road trip in 1988. Fortunately Ovation had some replacement necks at the factory but they were the more common necks without binding and the abilone diamond inlays. I was Glens' Bass player and Guitar Tech at this time and was able to get the Bluebird back in playing condition before our next road trip. That is why it has a different neck than the guitar with the replacement Humbucking pickup.

As far as the Ovation Bluebird 12 String is concerned, when I first got my hands on it, it had a top of the line bound neck with the abilone diamond inlays. that was the neck that got destroyed by xxxxxxx Airlines. When I received the replacement neck it was the plain neck with the dot inlays that's on the guitar now. Glen had two of these guitars. The other one is the one in the photo of Glen sitting on the stairs with part of his guitar collection. I only saw that guitar once when I was at his house. As you can see it has a replacement Humbucking pickup in the bridge position.

Thanks bluebird, I am going to watch the concert again to see that performance again. My favourite live show of Glen's

Also, the Bluebird at the HOF (same one that is in the 'staircase' pic) has the deluxe diamond inlay pattern on the fingerboard whereas the one that came into the factory has the plainer 'dot' pattern.

Thanks for the info jay. As you say Glen really did bond with that guitar. I noticed awhile ago that Glen had the 6 string and a 12 string Bluebird on the stage during the 1977 Festival Hall concert. I can't remember when he used the 6 string version during the show but of course you knew when he picked up the 12 string Southern nights was on his mind. I would think a 12 string guitar would be much harder to play on, especially as Glen does a lot of picking. I don't think I could handle one. Great sound though.

Look what showed up at the Ovation Factory this week

It appears that the Campbell family sent Glens Bluebird 12 string (one of them) in to be cleaned up. The good folks at the factory were kind enough to share some pictures. This Bluebird is going to be very close to the one owned, which once belonged to Glen, by Wayne Reid. 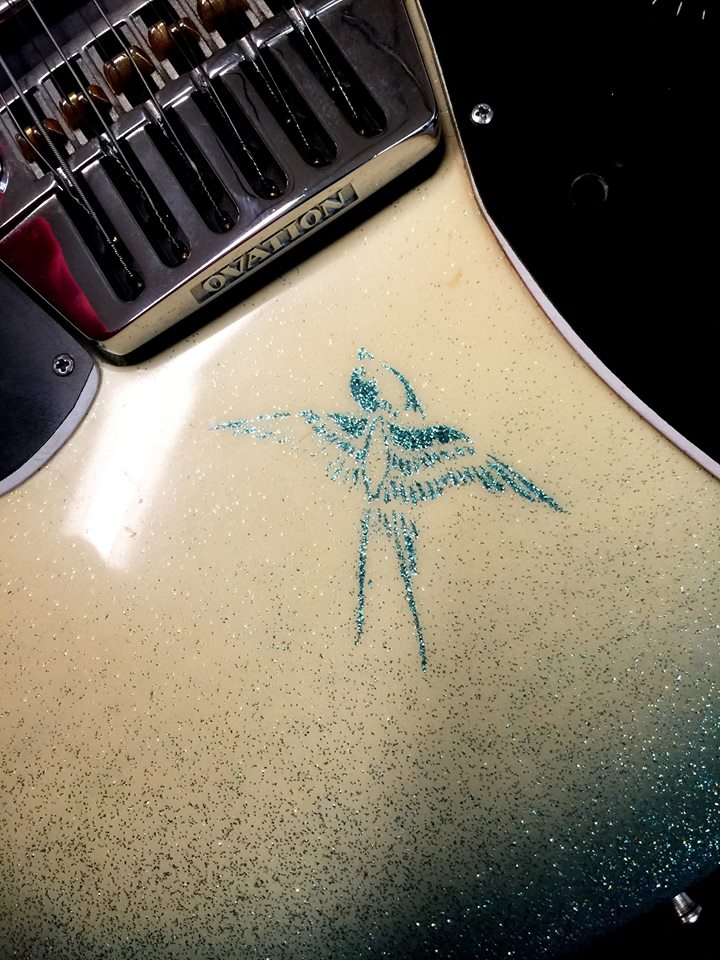 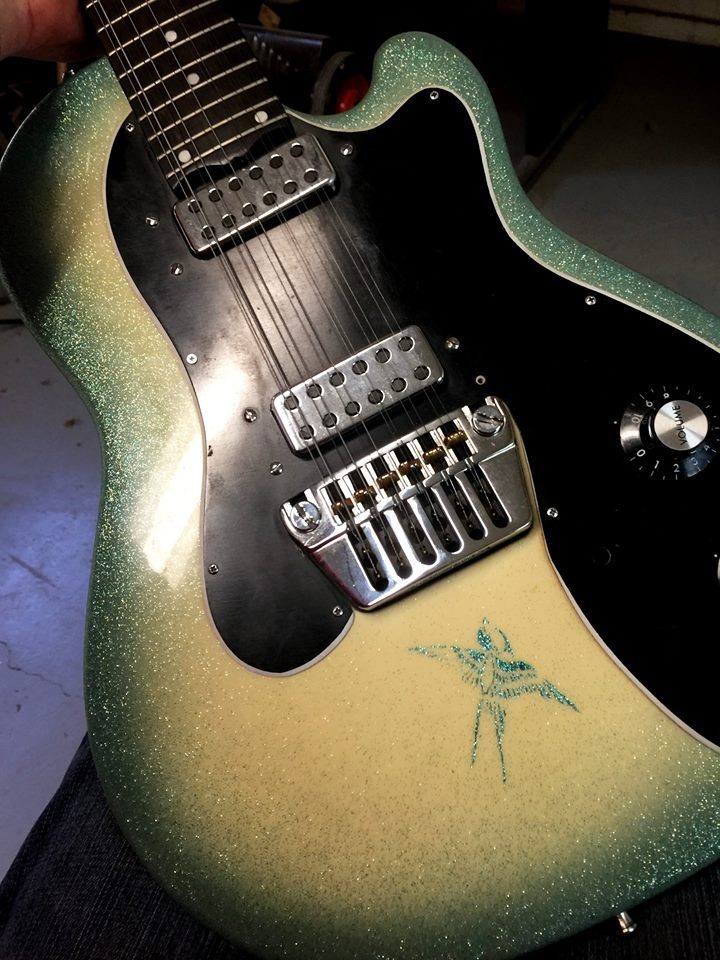 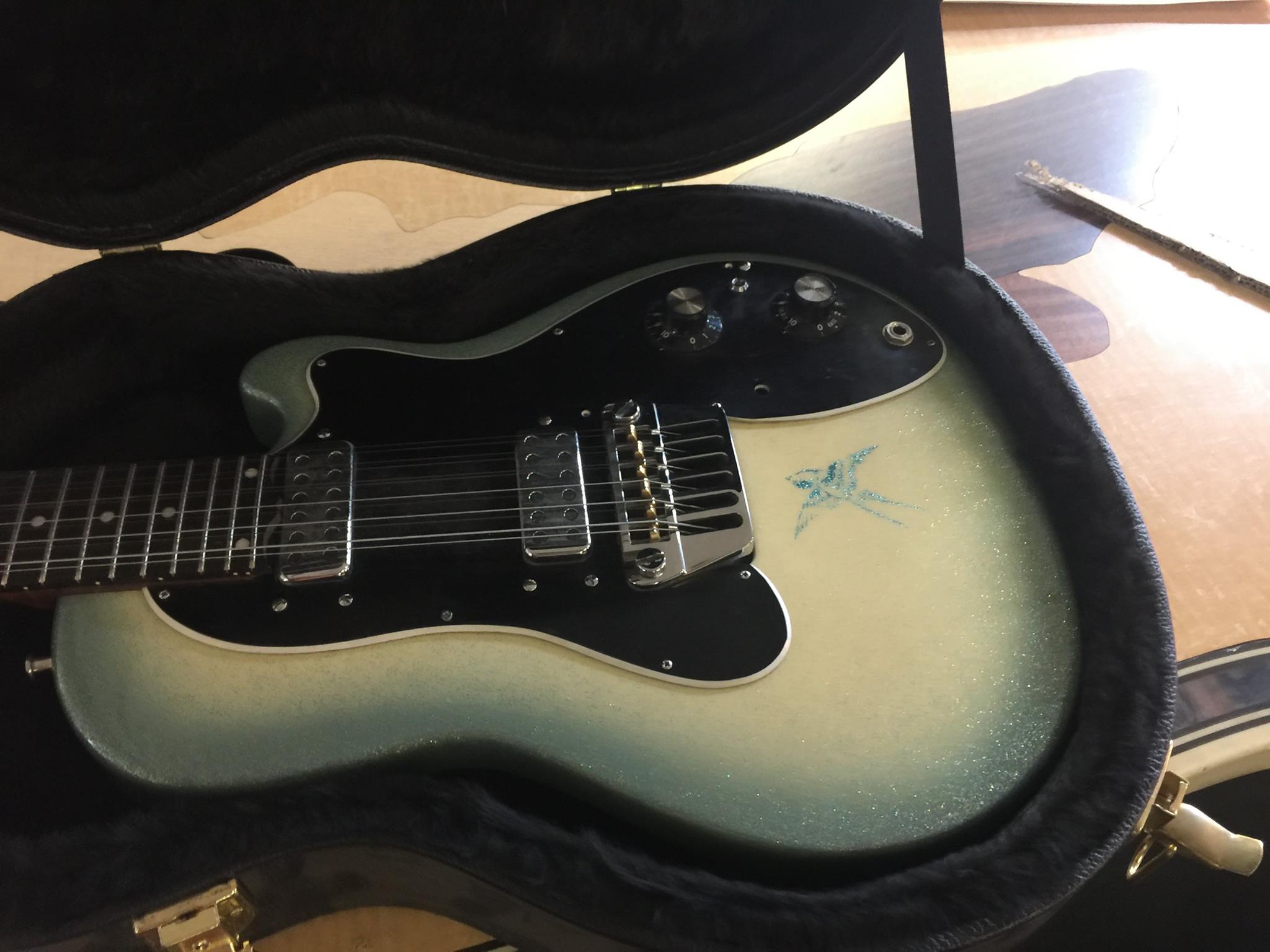 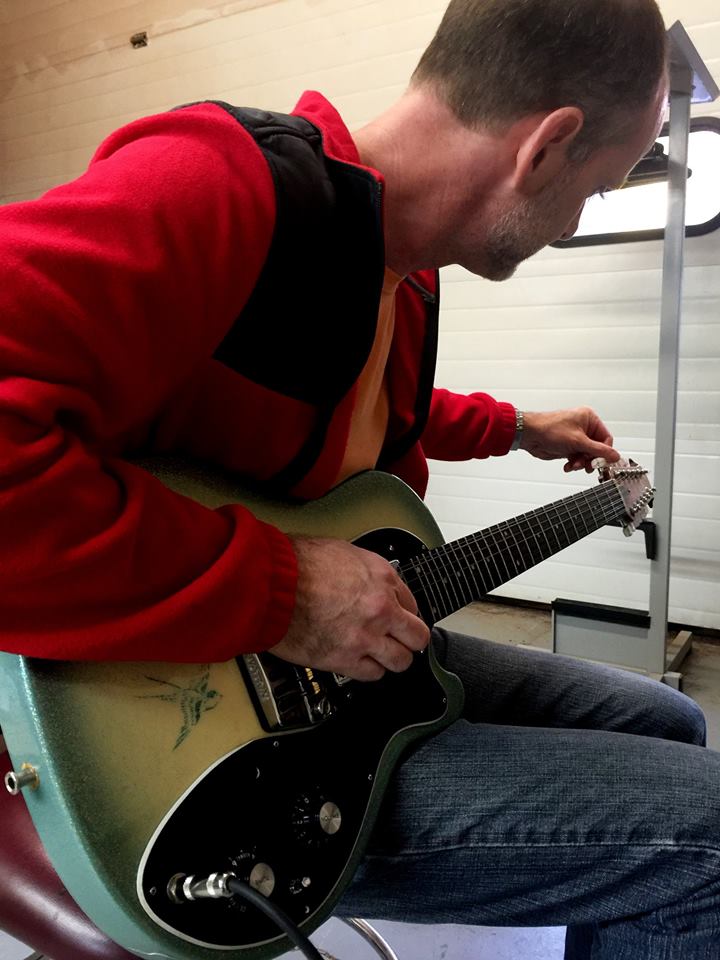 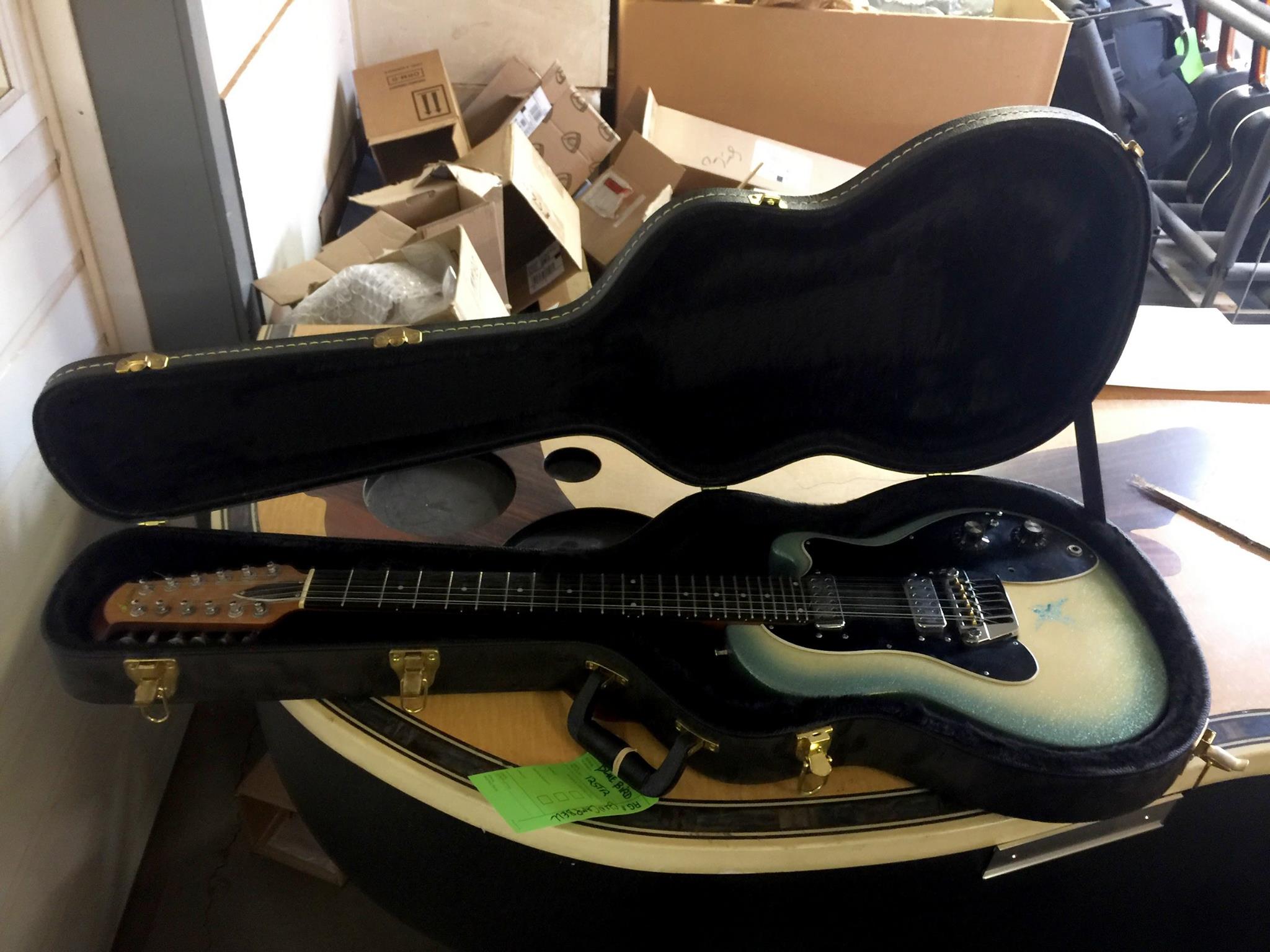 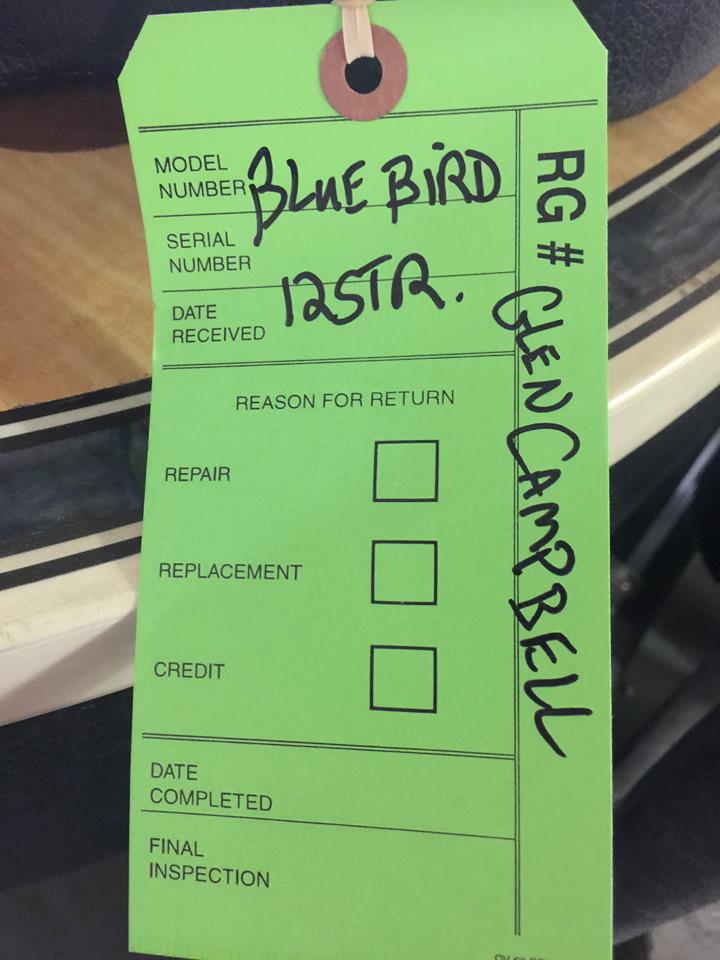 The Ovation Bluebird guitars were made exclusively for Glen. There were a total of about eight instruments in all, it is thought that five were 6-strings and the rest were 12-strings. The fact that Ovation would design a guitar model for the exclusive use of one artist underscores the strong company/artist relationship that Glen and Ovation had developed over the years. At first glance, these guitars appear similar to the solid body Viper models that were produced between 1975 and 1982, the only commonalities they share with the Viper model are body, headstock shape, and bridge hardware.
Although specifics seem to differ slightly from one Bluebird example to the other, the one pictured here: 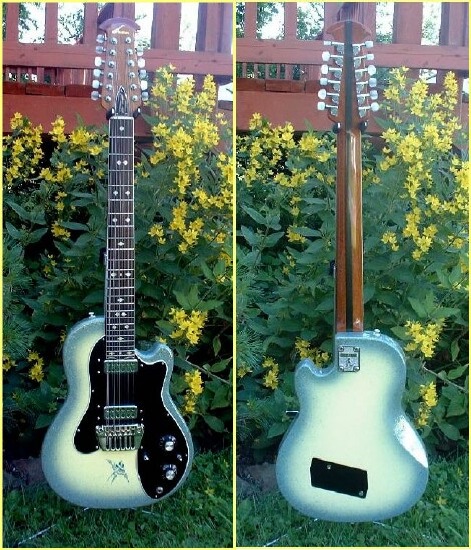 seems to be quite typical of the 12-string ‘Birds: It has active mono electronics similar to the production Deacon/Breadwinner models of the day, with a notch filter, combination pickup selector/out-of phase switch and a single set of volume/tone controls. Under the access cover in the back there are two miniature trim pots; one to adjust neck pickup volume and the other to increase or decrease the amount of “out-of-phase” effect as desired.

Ovation has always been known for experimenting with non-traditional materials and methods of construction and the Bluebird was no exception. The body was constructed of polyurethane over an aluminum frame. This unique feature was introduced to the production line somewhat later with the introduction of the UKII model. Most noticeable is the striking blueburst finish, which is exclusive to these guitars. The basecoat is a cream color with a baby blue/slate grey bursting on the outer edges. Before the clear coats were applied, gold and blue metal flake were applied, which gives the guitar the unique quality of seemingly changing colors from blue to aqua-green, depending on the lighting situation. The “bluebird” image seen behind the bridge area of the guitar is not a decal or painted on, but is done in the same gold/blue metal flake that was sprayed over the rest of the body.

Glen, off and on, played the 6 string bluebird for several years, beginning around 77. He did not seem as commited to it, as he did the 12. He played the 12 string from about 77 to around 91, when the guitar was damaged by the airlines. 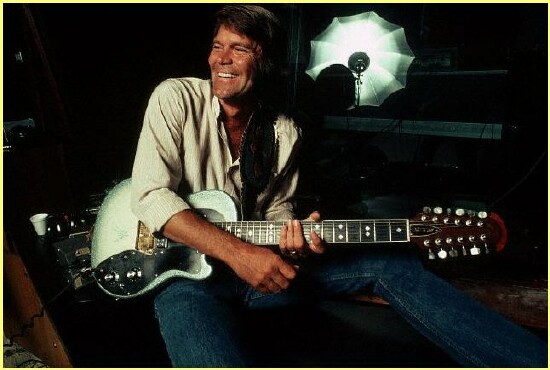 Glen can be seen playing the 12 string Bluebird here

It is thought that Glen still has two of the three Bluebird 12’s in his possession. We recently saw it, when Glen had this picture made in his Malibu home. 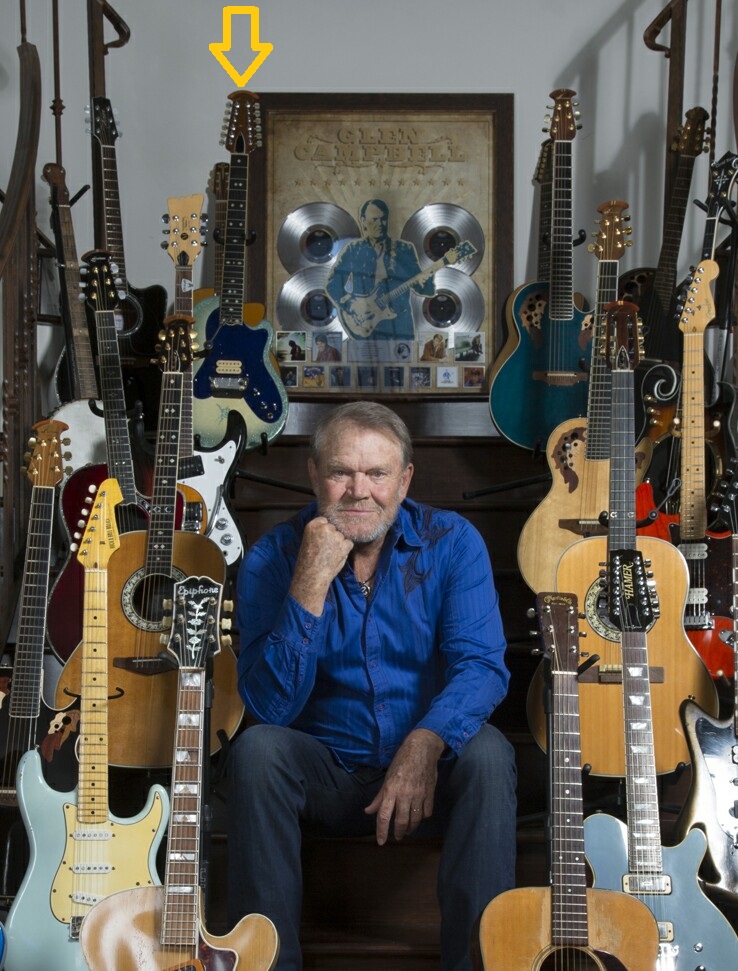 Wayne Reid is the proud owner of one of the original three. Many thanks go to Wayne for providing the majority of this valuable historical data on a guitar that Glen obviously bonded with.

One of Glen's Bluebirds is proudly displayed in the Country Music Hall of Fame (thanks Dee!)