Everything from Glen Campbell's history with Ovation, other guitar talk, and guitar picks!
Post Reply
4 posts • Page 1 of 1

For many years, Glen Campbell was not generally considered to have been an official Beach Boy, only a temporary fill-in. I saw these references to "temporary" and "fill-in" in both the Campbell and Beach Boys worlds. So I was excited to see this montage of photos tweeted on Twitter by a Beach Boys Legacy group under the title: "10 Official Members in 57 Years"!

Fifty-three years after Glen Campbell had accepted the telephoned emergency offer (a plea of desperation) from The Beach Boys to immediately fill in for Brian Wilson on tour when he became unexpectedly and seriously ill, Glen is now (rightfully imo) considered to have been an official Beach Boy (at least by BBL).

This is a step in the right direction leaving me with some "good vibrations" about Glen receiving his due (as well as Bruce Johnston).

I had been and still am disappointed that the official program for Brian Wilson's 50th Anniversary of Pet Sounds Tour did not identify Glen Campbell as a session musician on the Pet Sounds album. Other "PS" studio musicians as well as their photos were provided on the back pages of the program but not Glen's. (Needless to say, I did not purchase the program. Ha!) 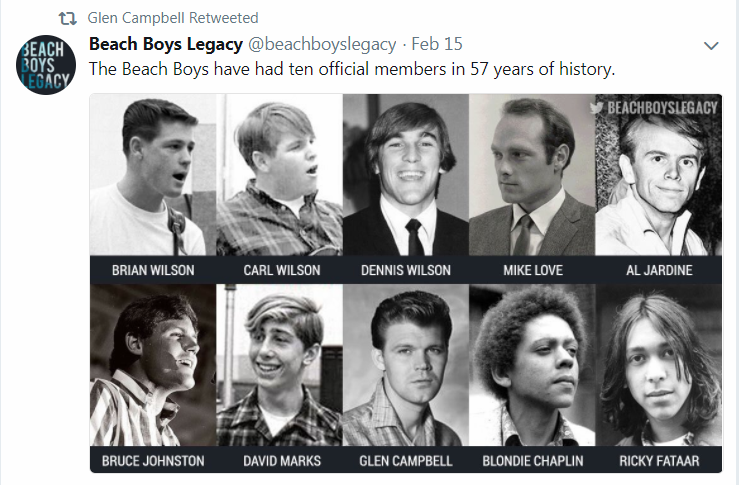 Cool stuff. I was always amazed at how tight the harmonies were in that band.

Here's the Beach Boys Medley we did in our show. Live from Doncaster England - 1990
https://www.youtube.com/watch?v=2kY-ehqTBvc

The image shown below is a transparency that recently sold on the secondary market for about $60.
It was listed as: "Original 35mm color film TRANSPARENCY The Beach Boys 1965 w/ GLENN CAMPBELL"
The seller had provided this description:

"35mm color slide-original MASTER color film transparency taken circa February 1965-- in original mount.
This is from one of the rare dates when guitarist GLEN CAMPBELL was filling in for BRIAN WILSON (probably taken 2-13-65 at the Academy Of Music in NYC!)"

The transparency looks like the real deal possibly with the exceptions of both the date and location. A similar picture is in the book THE BEACH BOYS IN CONCERT written by Ian Rusten and Jon Stebbins, pg. 57, and is credited to The Beach Boys' concert in Buffalo, New York on February 22, 1965, at Kleinhan's Music Hall. According to Rusten and Stebbins, 3,000 fans were in attendance and "behaved well" during the show. However, after the concert ended, fans stormed the stage and tried to get to the backstage area to see their idols.

In any case, the concert photo (transparency) is one of the few photographs taken of Glen performing on stage with The Beach Boys (without Brian, of course).

The guitar does not appear to be Glen's own guitar; maybe Brian Wilson's?

(Note: the green lettering on the transparency was done by the seller. Glen is pictured second from the left.) 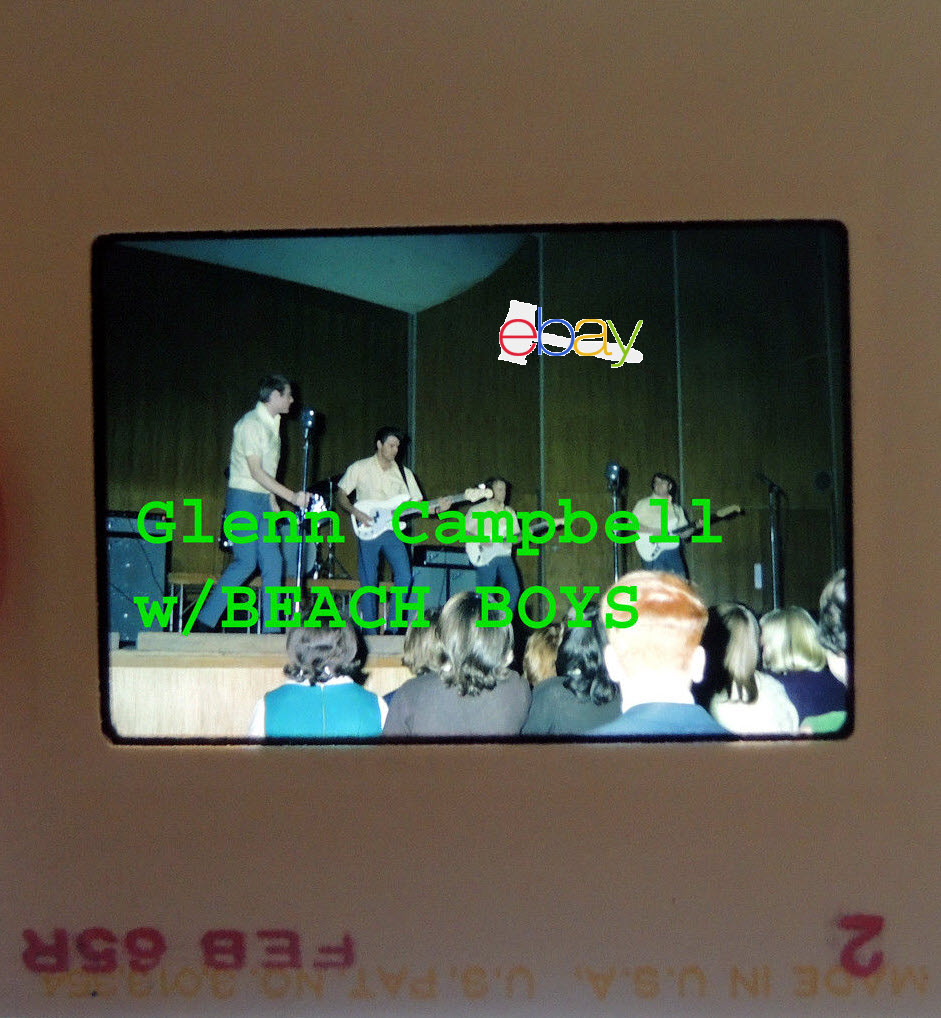