Definitely looking forward to seeing Ashley in concert after seeing and reading all this. I'm intrigued. I just hope she comes to my area sometime soon.

Very cool Randy. Thanks for posting. So now she has performed in Spain as well!

Bet your right on the red bandanna. Seems dueling banjos/guitar is popular anywhere as it should be. Perhaps not a big crowd, but yet very enthusiastic .

Randy, thanks for adding that...I guess if you wear a red bandanna over there, that certifies you as "country". I wonder how big the crowd was!

Thanks Randy! I hope she will come play in a place near to you as well. Then you're in for a treat.

Two excellent reviews and I give the nod to Cowpoke of course . My observations of her from what I've seen is like her Dad, she brings her "A" game to performances, and understands the importance of interacting with the audience...." Through these ingredients it became a top concert. The audience present listened breathlessly and enjoyed the fullest. Ashley's interaction with the audience was relaxed and fun, her stories between the songs were fascinating. For example, at the beginning of the concert, she thanked the audience for the warm welcome and asked casually what 'Thank You' was in Dutch. Although she said 'thank you' quite well, she thought it sounded like the name of a city: "Dankeville".

Here's a very positive review of Ashley's concert in Amsterdam, in Dutch.

They have a complete setlist mentioned, in the right order.

This Friday (September 6, 2018) I went to see Ashley Campbell together with my GC pal Casper in Amsterdam. We both didn't really know what to expect so beforehand we didn't worry about a thing. We had diner in a nice Surinam-Chinese restaurant near Central Station and then had a couple of beers in a bar near the concert venue De Melkweg (The Milky Way). As I am not a beer drinker at all I already felt I was floating through the Milky Way after two beers...

Around half past seven we went in and witnessed the opening act (The Martial, two guys with guitars from The Netherlands). My mother always told me if I have nothing nice to say about someone then better say nothing. There, I already said to much!

Around half past eight Ashley Campbell came on stage, together with her two-piece band consisting of Eli Bishop on fiddle and Cy Winstanley from New Zealand on guitar. Exactly at this moment the battery of my phone died. So, I was not able to make notes about the setlist or make photos... aargh! Luckily Casper sent me his photos (including one of the setlist). 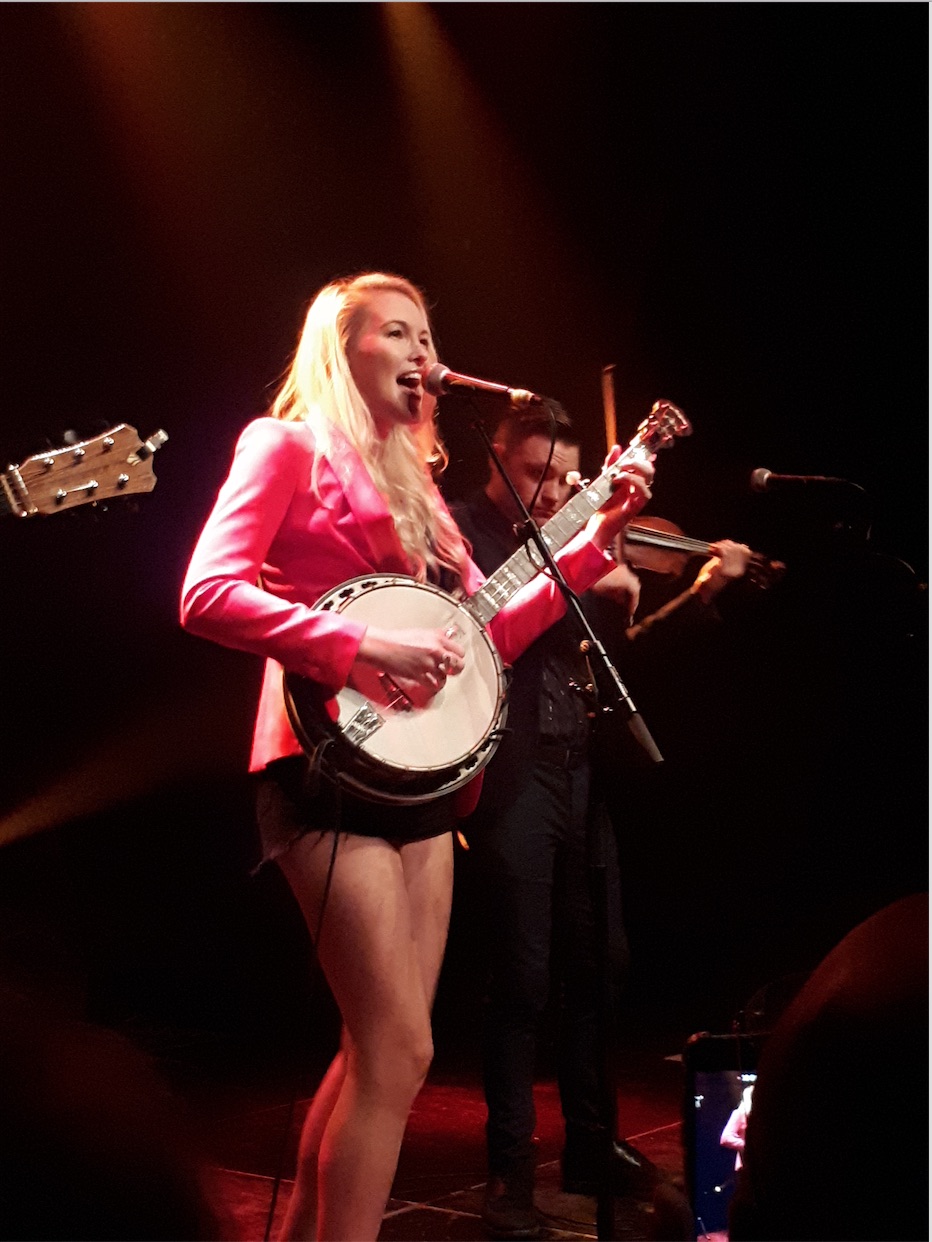 Ashley started out with the banjo and switched to guitar and back a couple of times. First song was "Better Boyfriend" which she has been playing live for a while now (and is also included on her debut album "The Lonely One", released last May). It's a funny, smart song and the crowd loved it (I would guess there were around 80 - 100 people).

The second song was the instrumental called "Carl and Ashley's Breakdown" which she wrote with her godfather Carl Jackson. By that point it was already was becoming clear that Ashley really loves to play. She's so into it when she plays banjo, making all kinds of funny faces when reaching for the strings, playing licks. It's fun to watch someone enjoying herself so much and she sounds really good on banjo. Together with Eli and Cy they are a great ensemble which is very interesting to listen to.

The third song was "The Lonely One". Ashley explained she chose this as the title track for her album because basically all the songs were about variations of being lonely, being lonely after being dumped by a boyfriend, being lonely because because she's not ready to date again etc. Throughout the concert she made quite a few allusions to this subject. The only man in her life right now is her dog Frodo. I could sense some of the (older) men in the room thinking, while watching her endlessly long legs, that they would gladly be the man in her life! "The Lonely One" is a very nice, Roy Orbison-like song, and Eli's fiddle playing added a lot to it.

I am pretty sure after "The Lonely One" came the first cover of the evening, Doc Watson's "Deep River Blues". Again she really got into it, afterwards remarking that while she sang the song she noticed she was smiling from ear to ear while the song itself is actually very sad.

After this I am not sure about the order of the songs they did. I do have a photo of the setlist but I didn't play the songs in that order. 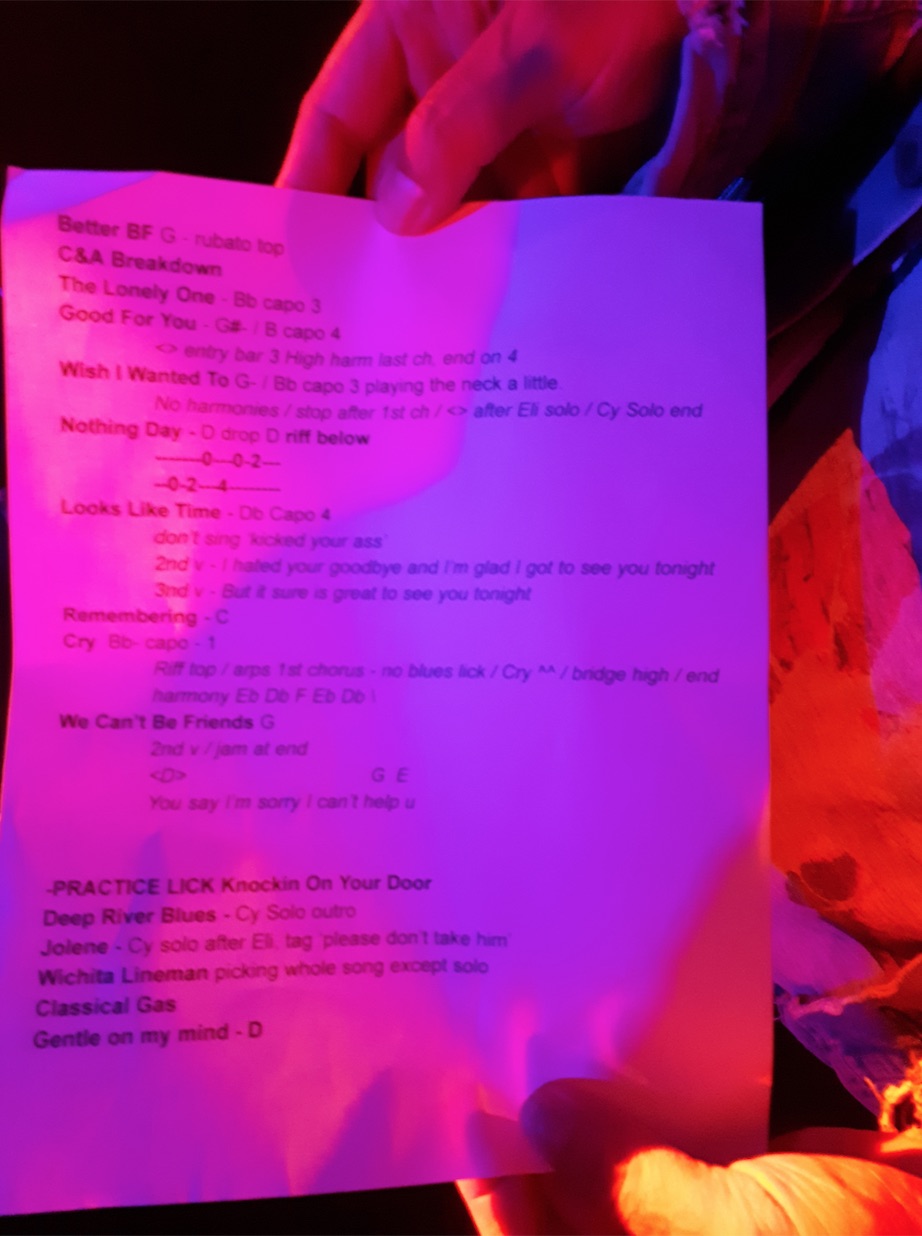 Ashley obviously played a lot more songs from her album: "Good For You", "Wish I Wanted To", "Looks Like Time", "We Can't Be Friends" and "Cry". She also did "Nothing Day", "the only happy song" from her album and one of the best songs she has written so far in my opinion. Listening to these songs made me realize that maybe her biggest talent lies in her songwriting. These are all highly melodic, hook filled songs with good lyrics (be it funny, wistful, moving or smart). So it wasn't at all that I was waiting for the Glen Campbell cover songs to come. The complete set was highly entertaining. 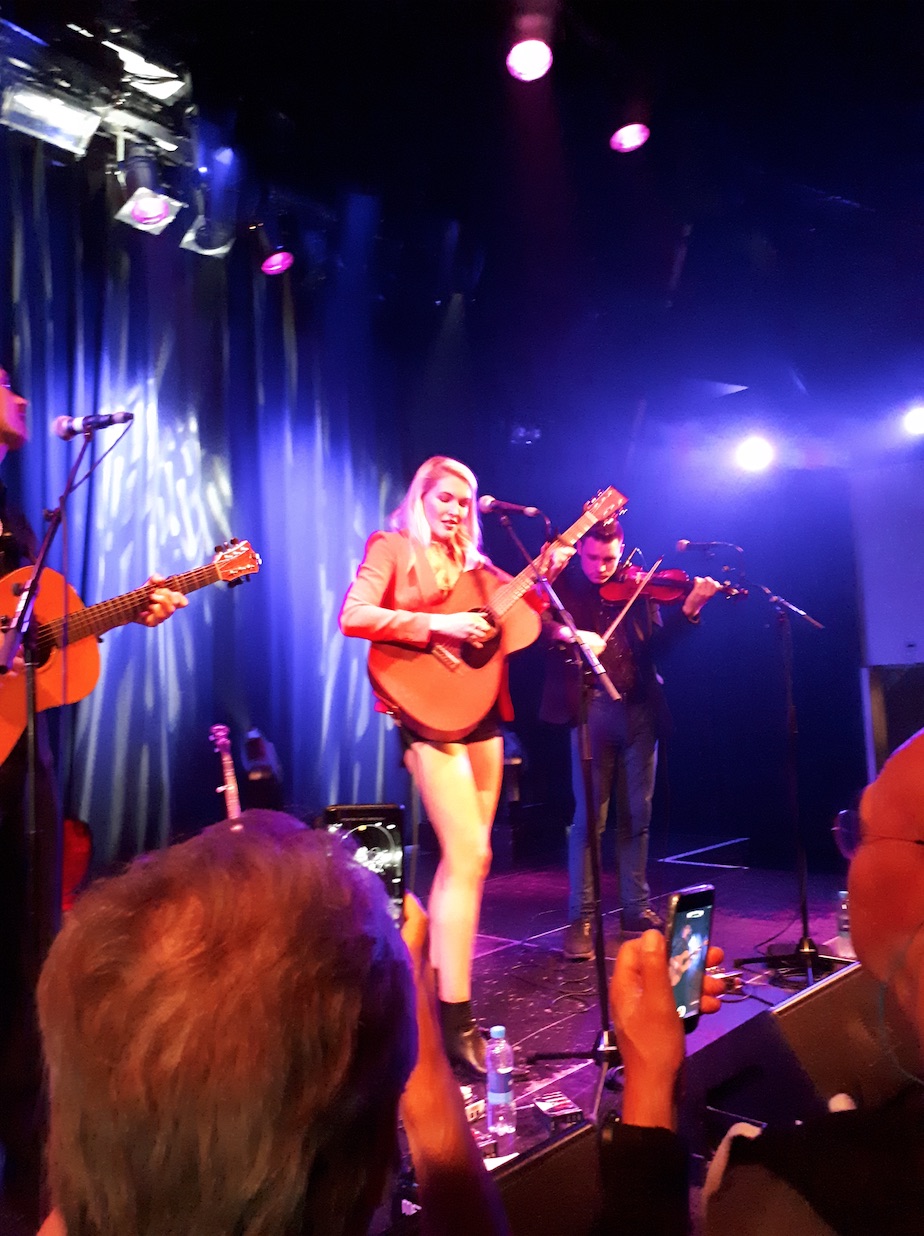 She did do a few songs from her dad though. She told the story about how she came to play the banjo (learned it at college for a play) and then first joined her dad on stage for his 2009 tour of Australia and New Zealand, playing on Gentle on My Mind. Ashley's version of Gentle is completely her own version, more stripped down obviously, but in the instrumentation and solos you hear subtle references to Glen's version. Continuing the story of her and her dad she talked about the Goodbye Tour, the unconditional love of Glen's fans and the documentary I'll Be Me. Which of course led to "Remembering". 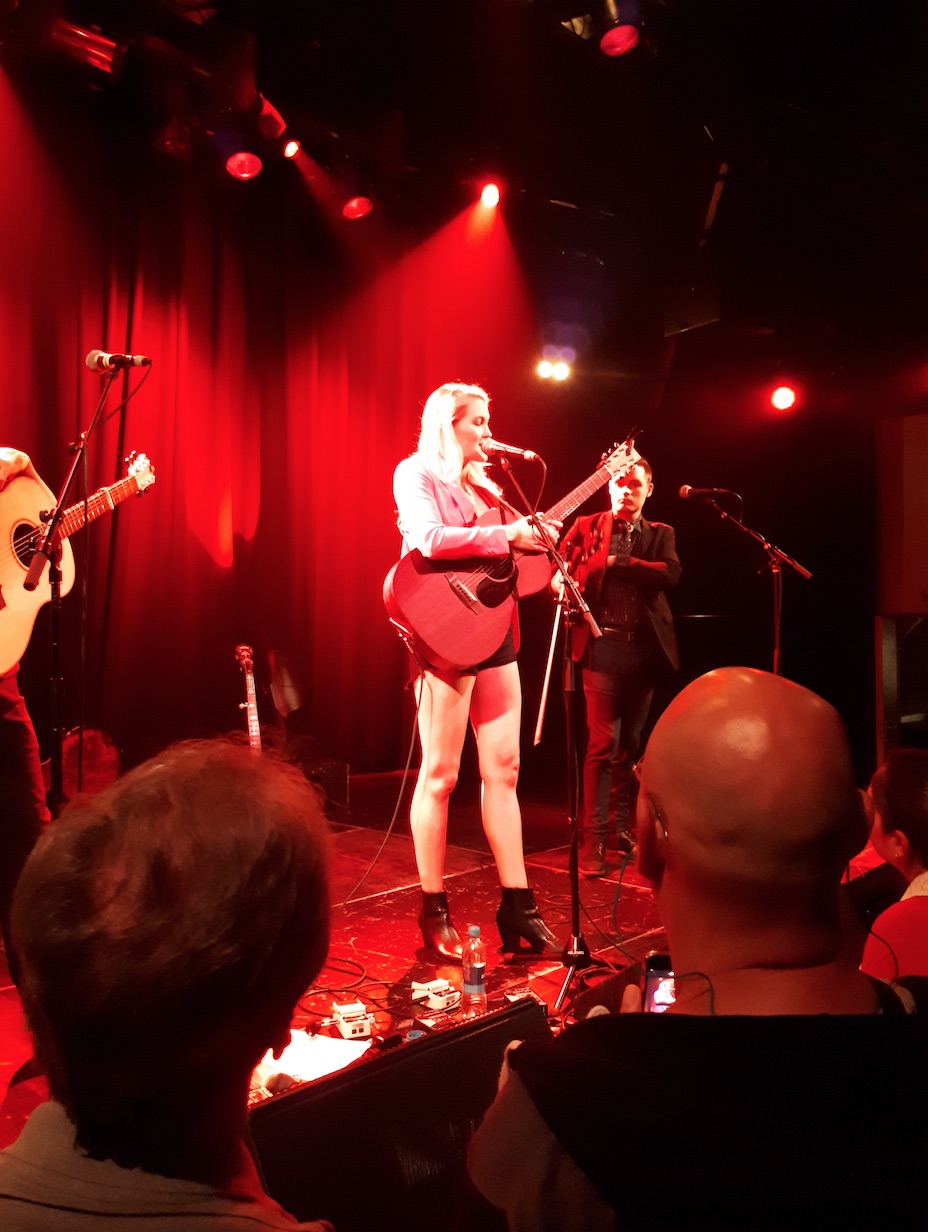 Ashley sounded so good singing this song. Now you might say "wait a minute, so far everything Ashley did was good, great or wonderful, aren't there any critical notes in this review?". Well now that you mention it, one thing I did notice is that Ashley's voice sometimes sounds... I am not sure how to describe it in english... I would say "squeezed" or "thin", especially in the louder or higher notes. (And boy, she really can sing high and in perfect pitch too. Like her dad she is just incapable of singing off key.) What I mean is that her voice has some of the sweet and almost childlike quality of Dolly Parton's voice. But Dolly sounds more... open I think. However, when she sang "Remembering" she sounded so smooth and relaxed all the way through. Afterwards I theorized that maybe this was because "Remembering" is more soft-spoken and also less rangy then some of her other songs. It could also be that it is in a lower key. Perhaps Ashley sounds best when she sings one or maybe even a few keys lower than the highest key she is technically able to hit? Or maybe I should just stop talking nonsense and get on with the rest of the review...

Ashley did another song that is linked to her dad, an instrumental. I was guessing it would be "Dueling Banjos" but it actually was... "Classical Gas"! Sounded great in this bluegrass setting. They apparently made a mistake near the end because afterwards they laughingly called it "a work in progress" and Ashley played one part again to get it right, but it was actually one of the highlights of her set.

After that Ashley did two more covers. One was a song "by another blond country singer": "Jolene" by Dolly Parton. The other, near the end of the concert, was a beautiful version of "Wichita Lineman". Someone from the audience complimented her afterwards. She said that she really liked that kind of instant positive feedback. "But if it's negative, keep it to yourself!"

A young Dutch woman from the audience, who I noticed was able to sing most of Ashley's songs word for word (together with her friend) requested another song from Ashley's album as an encore. Ashley loved the fact that they knew her songs and played it, but only with Eli as Cy had not played this song yet during this tour. Cy just went over to stand between the audience and enjoy the rest of the concert. The song they played was "What I'm Doin' Here", a song about herself, lurking in the shadows, watching her ex-boyfriend with his new love in a bar, .

Then Ashley and Eli did a bluegrass instrumental together, called "Shuckin' the Corn". It was really good and the audience loved it. Interestingly, Larry McNeely did this song on an early 70s album produced by Glen. Maybe she got it from there?

For the last song Eli also left the stage. Ashley told that she was already writing for her next album which she expected to start recording in December of this year. She joked that the title of this new song was completely different from the songs on The Lonely One because this song was called "Lonely... Guy"!

This song, believe it or not, was maybe the best of the evening. Such a beautiful melody and lyrics. So, we can be sure her songwriting talent has not reached its peak yet.

Two minutes after the concert the band was already behind a table selling CDs and photos of Ashley. Then Ashley came to meet up with the audience and sign the CD or the photo and makes pictures.

Well of course I bought a CD and a photo. I was able to tell her about this forum saying it has a lot of articles about Glen's musical history, about his time in New Mexico, with The Champs, the Beach Boys. She was really kind and said she would surely visit it because she wanted to know more about the dad's history as well. I also mentioned the two other admins here, Dee and Jay. See the photo of the photo for proof! 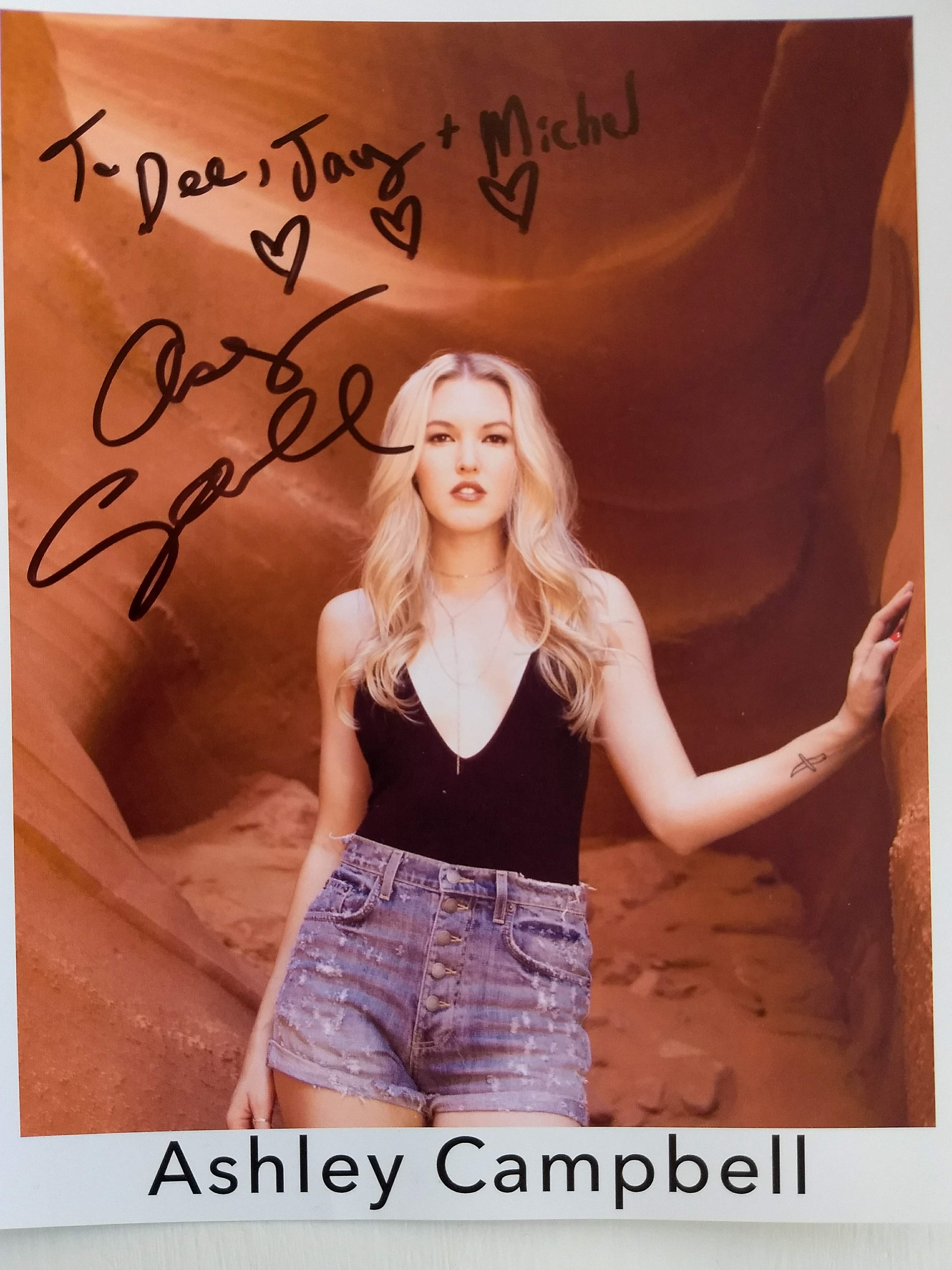 And of course I had my photo moment with Ashley... 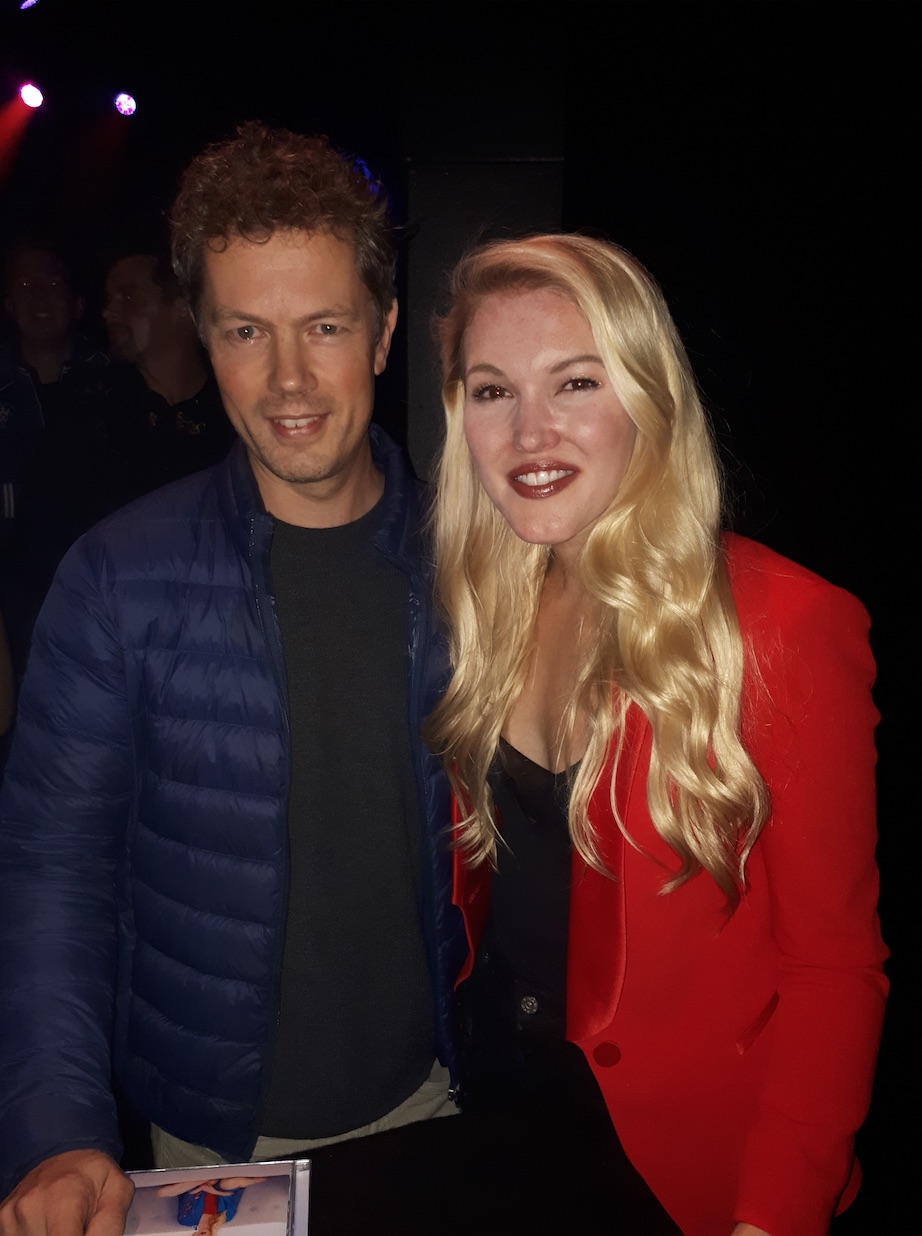 In conclusion... Ashley in concert is really entertaining and if she comes to a town near you, you definitely have to check her out!

PS: Check out this photo of Ashley in Amsterdam... https://www.instagram.com/p/BnayclrAuHT/