Kim Campbells Writes a Book About Glen - "Gentle On My Mind"

Yes forums like this one are all about the musical legacy and detailing every part of it.
I haven’t read Jimmy’s book yet. I guess to sell a book it will have to have their share of juicy not music related stories as well...

Yes it was a shame about some of the hardships that Debby and the family have had to deal with. As regards the music though, I guess this and other fan forums are going to be the best source for tit bits of information. I felt even Jimmy's book "Cake out in the rain" didn't really offer as much insight as I would have liked, especially regarding lesser known works. Perhaps Jimmy's experience doing the reunion album would have been an interesting topic, of how he and Glen worked together on the various tracks and their individual creative processes. Perhaps another book would be possible just about the story behind the records and songs. It's been done with Wichita lineman.
Mike

I agree with you Mike. I found Debby’s book hard to read too. I also felt sorry for Debby because of the pain she went through. And I was disappointed by the complete lack of a musical perspective. Maybe this book of Kim will also be a reply to that book. But I hope it will go beyond that.

Hi Cowpoke, that this cover picture is probably one from the early years of their relationship. 1984, based on Glen's appearance and clothing. To be fair she is covering her time with Glen, which as we know had a rocky start and a difficult end. The middle period was probably the happiest time, but I guess the story is is going to be about Glen's redemption, happy years and then the final Alzheimer's struggle which was also a several year journey. I think Glen looks good in that picture and as you say it was the same Glen on the Letter to home album. I think it will be an honest account about their lives but I don't think you will get much of a musical insight into Glen's music here. That my friend will be something you will need to look elsewhere for. Dylan Jones would probably be a better read for you Cowpoke.
P.S. I hope that, in fact I am sure, this book will be a kinder reflection on Glen's life and family than Debbys bitter telling, which I found very hard to read or accept.
Mike

I am sure I will buy it. But, I am not a fan of books that focus on the personal and not on the music. The music for which we know about Glen in the first place. But, going on what Kim has written before in her blogs, and what she has said in interviews, she has always touched upon Glen's musical legacy as well, so I am hopeful.

The first thing that I noticed though is... that picture in the front. One, I am surprised she picked a photo from the time that Glen was still battling his demons with alcohol. And two, it seems like a combination of a publicity photo (with the brown leather jacket he wore professionally in 1984 and his face turned towards the camera) and a personal photo. Never saw this one before. Maybe it was part of the photoshoot for his album Letter To Home, which contained Glen's musical loveletter to Kim, A lady like you?

Kim Campbells Writes a Book About Glen - "Gentle On My Mind"

GENTLE ON MY MIND: IN SICKNESS AND IN HEALTH WITH GLEN CAMPBELL, by Kim Campbell will be released June 23, 2020. 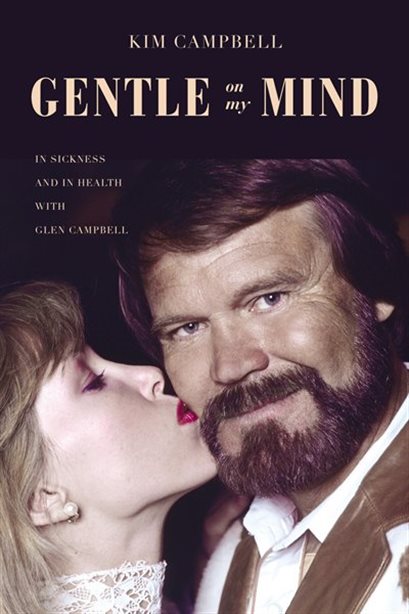 GENTLE ON MY MIND: IN SICKNESS AND IN HEALTH WITH GLEN CAMPBELL
Gentle on my Mind.jpg (45.63 KiB) Viewed 1874 times


The page-turning, never-before-told story of Kim Campbell's rollercoaster thirty-four-year marriage to music legend Glen Campbell, including how Kim helped Glen finally conquer his addictions only to face their greatest challenge when he was diagnosed with Alzheimer's disease.

Kim Campbell was a fresh-faced twenty-one-year-old dancer at Radio City Music Hall when a friend introduced her to Glen Campbell, the chart-topping, Grammy-winning, Oscar-nominated entertainer. The two performers from small Southern towns quickly fell in love, a bond that produced a thirty-four-year marriage and three children.

Now Campbell tells the complete, no-holds-barred story of their relationship, recounting the highest of highs--number one hits, acclaimed performances, the birth of their children, encounters with Mick Fleetwood, Waylon Jennings, Alan Jackson, Alice Cooper, Jane Seymour, and others--and the lowest of lows, including battles with alcohol and drug addiction and, finally, Glen’s diagnosis, decline, and death from Alzheimer's.

With extraordinary candor and astonishing bravery, Kim Campbell reveals the whole truth of life with an entertainment giant and of caring for and loving him amid the extraordinary challenge of Alzheimer's disease. This is a remarkable account of enduring love, quiet strength, and never-faltering faith.

You can purchase the book at most of the usual places.